Wild Blue Yonder: The Air War in Europe, 1940-1944 from GMT Games is an amalgamation of several classic World War II aerial combat games released over the past 20+ years in the Down in Flames Series. Starting with Rise of the Luftwaffe in 1993, followed by Eight Air Force: The Air War over Europe, 1942-1945 in 1995, Zero!: The Rise and Fall of the Imperial Japanese Air Force in 2001 and Corsairs and Hellcats: WWII Air Combat in the Pacific Theatre, 1942-1945 in 2003 along with a host of other aircraft packs and inserts in C3i Magazine, this series has been beloved for awhile. But, the early games were all out of print and there was definitely interest in players getting their hands on copies. So, with that in mind, GMT decided to not simply reprint the early editions but somehow synthesize the games down into what was best and not just reprint them but make them deluxe by adding several other options including campaigns.

Alexander and I have really enjoyed playing games focused on the air war during World War II and have played many games on the subject including Wing Leader: Supremacy, A Wing and a Prayer, Target for Today and Bomber Command amongst others. When we received our copy of Wild Blue Yonder, we were very excited to try the game out. Wild Blue Yonder uses a simple system to mimic the rigors of aerial combat in World War II by providing each player with a deck of cards from which they draw and then play those cards to take actions. These cards include attack cards as well as reaction cards that allow players to maneuver their aircraft away from enemy attacks and gain favorable position to take better shots.

In this Action Point, we will take a look at the makeup of the game, the anatomy of a few aircraft cards and some examples of the cards and how they work.

The game is played as players control an “Element” consisting of two aircraft, a Leader plus his Wingman. These aircraft are fighters and we all know what the role of fighters is – to simply shoot down enemy aircraft. Players have total control over the Leader with the cards that they are allowed to draw and keep in their hand but less control over the Wingman as they will draw a temporary mini-hand whenever it attacks or is attacked.

I first want to go over the anatomy of the Aircraft cards so you can understand how the system works.

The Aircraft card looks pretty busy but it is really pretty straightforward. The Damage Capacity number in the upper right hand corner identifies the amount of damage that the aircraft can sustain before it will become impaired. When this card is hit 3 times, it will flip over to the reduced side which has slightly lowered statistics. Then a new number will be listed in the upper right hand corner that shows how many total cumulative hits the aircraft can sustain. The hits sustained by the aircraft that caused it to flip over are retained. Once this limit is hit, the aircraft is considered shot down and will be eliminated from play. The Balance Value is a very handy statistic as it helps you to create fights that are even handed for both sides. The Ceiling will tell you how high the aircraft can operate as there are several different levels including Low, Medium and High. Horsepower tells you how many cards the player will draw during the Draw Step of the turn. This number is also affected by the altitude the aircraft is operating at. The base level shown on the card assumes the aircraft is at Medium but when it operates at Low it will gain a card to this draw and while at High will lose a card.

Burst is very important as this will tell you how many Bursts the aircraft can fire at an enemy. This number is modified when advantage has been gained or when tailing a plane as it is a little bit easier to shoot them. Bursts will be important as certain cards will be limited to play unless you have that many Bursts available. Performance is the normal maximum number of cards the controlling player have in their hand. The other information is for flavor, including the Aircraft Type and Month of Service. Although, some scenarios will limit the aircraft available based on early war or late war and Month of Service will become important at that time.

There is no board with Wild Blue Yonder, as cards are simply laid out on the table facing each other and two mechanisms are used to represent the spatial relationship between aircraft. First is Altitude. At the beginning of the game, each player will take an Altitude counter of their choosing to reveal simultaneously to identify their starting altitude. If aircraft are at differing Altitudes, an Attack card cannot be played until they are at the same level. This can be accomplished by the active player simply adjusting their Altitude at the start of their turn. This will however have a cost, or even a possible benefit. In order to adjust your Altitude up one level, you must discard a card. If you are adjusting down, you will pick up an extra card. Once the opposing aircraft are at the same level, then an Attack card can be played but we will cover that in the second Action Point in this series.

The second mechanism used to represent this spatial relationship ballet between the two enemies is Position. There are three types of Position that players will need to focus on and remember including Unengaged, Engaged (including both Advantaged and Disadvantaged) and Engaged (Tailed). 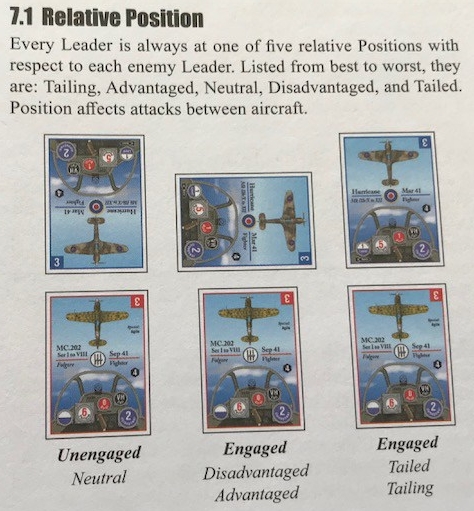 The difference in these types is important as it will determine the number of Bursts that you can fire at your enemy. During the Unengaged Position no aircraft has an advantage and they can fire only the number of Bursts identified on their Aircraft card. When you are Advantaged, you can fire an additional Burst in addition to your printed Burst level. When you are Tailing an enemy aircraft, you can fire an additional three Bursts in addition to your printed Burst level. Also if you are Tailed or Disadvantaged you cannot fire upon your enemy with your Leader unless you have a Rear Gunner. You Wingman can have a different Position than your Leader and will also have to pay attention to their advantages and disadvantages.

So that you understand why Bursts are important, I will show you a few cards.

You will notice that these two cards share the same name, In My Sights, but are very different cards. Notice on the left side the number of Bursts that are printed on the card. The front most card only has 1 Burst printed, which means that this card can be played as one of your available Bursts. The back most card requires 2 Bursts to play. If you don’t have 2 Bursts available, this card cannot be used. You will also notice that the lower the Bursts required usually equates to less Hits. 1 Burst equates to only 1 Hit while 2 Bursts equals 2 Hits. This is why Position is important.

The great thing about Position and being Advantaged or Tailing is that you will be able to play more Attack cards. If you have 4 Attack cards in your hand, that require a total of 4 Bursts to play, you will only be able to play all of them if you are Tailing your enemy and have 1 printed Burst on your Aircraft card. That is the key to the game. Managing your hand to make sure you can play the cards you want to when you can.

In the next Action Point in this series, we will take a look at a few situations in a dogfight and show you how the game plays.

Alexander wrote a review which you can read here: “68 Gallons Fortis Leader” – A Review of Wild Blue Yonder from GMT Games