Skip to content
Date: July 27, 2016Author: Grant 10 Comments
I acquired my copy of Combat Commander:Europe in May this year and over the past 3 1/2 months have played 8 scenarios and come to absolutely love the game. I find the game challenging, strategic, “thinky” and most importantly FUN with the added bonus of high replayability due to the many printed scenarios and the innovative Random Scenario Generator (RSG).  In fact, as far as small unit tactical combat games go, I don’t know if there is anything out there that even compares to Combat Commander.  As is always the case with these war games, the narrative told by the actions and game flow is the best part.  I always have been able to immerse myself in the moment and in essence transport myself to the battlefield to partake in the struggle.  GMT does a fantastic job of creating the game vehicle that takes us all on this wild ride of emotion and angst as we “experience” the struggle of the depicted time!  CC:M is no different in this respect and continues that tradition of great story telling!

So I now have acquired Combat Commander:Mediterranean (or CC:M) which is NOT the “expansion” but better yet follow-up effort to Combat Commander:Europe (CC:E).  CC:M covers the Mediterranean Theater of Operations in World War II including countries such as Crete, Poland, France, Italy, Greece, Yugoslavia and Egypt.  CC:M’s main contribution to the tactical family though is the addition of three new “nationalities”  including:

These nationalities come with their own unique feel and set of strengths and weaknesses (the Italian’s appear to only have weaknesses!) that add to the variety and enjoyment of playing the game.

CC:M is NOT a standalone game but is a follow-up (NOT an expansion) so you will also need to own CC:E in order to play. The things you will need from CC:E to play are as follows:

Here is a list of the new items/components that are contained in CC:M:

A Brief Look at Each New Nation

One of the things that I love about Combat Commander is that the game doesn’t pull any punches with the nations that they are trying to represent.  If your nation is not good at war, (I’m talking to the Italians) then your cards and forces represent that fact.  I have not had a chance to play all of the new nationalities but in looking over their capabilities and the summary that is so nicely provided by Chad Jensen at the beginning of the Playbook, I can definitely see several things that you must be aware of before playing each faction.  I will try to give a summary of each of the factions, including their strengths and weaknesses, here but more in-depth analysis and information can be found on pages 2-4 of the Playbook.

The British & Commonwealth (Tommy Atkins, Tommy, Kiwi, Aussie, etc.) – the average British soldiers were not farm boys that were simply thrown into a uniform, handed a rifle and shoved into the line of fire.  Their units are generally hardy in the game with an average Morale of 7. The elite Guards units need to be treated with care though as they will break a little easier than other nations elites.  The Leader-to-Squad ratio of 1:3 ties Germany for the best in the game but they have more 1 Command Leaders in their OB’s so you will have to make sure your formations are tighter so you can control your forces.  There is little worse than having units out of the fight because they are just out of Command range! The British Fate deck has 2 fewer Fire Orders than average but has a greater frequency of Marksmanship Actions (6) than other nations. Translation, fewer shots but better accuracy, so be judicious with your Fire Orders! This is to represent the British steadfastness under fire as well as an emphasis on personal marksmanship. They also have one additional Recover Order than is normal (10 instead of the normal 9) and can generate more Heroes and suffer less Cower and Prisoners of War Events than the other factions.  The British also have the only Light Mortar that is capable of laying smoke. This was used against me in our 1st game of CC:M as I couldn’t get good shots on the Kiwis as they were advancing up my left flank to run off the board for the victory due to their smoke cover! The French & Allied Minors including Polish, Belgian, Greek and Dutch – the French Fate deck is not bad and their units are generally on par with the other factions, especially in the area of Morale.  The biggest downfall for the French deck is that they are only able to discard one card per turn. This handicap causes your hand to become clogged with useless Command Confusion cards and can put you in a terrible position needing a Fire Order but having none!  To counter act this problem you will need to focus on using cards for their actions whenever possible, even if the benefit isn’t great at the time. This will allow you to draw a replacement card at the end of the round that could lead to a better hand for your next turn.  The French Fate deck is weaker in the areas of Artillery and smoke-making and will generally see a higher rate of weapons breaking when firing.  As alluded to earlier, it has a higher frequency of Command Confusion cards and couples with the poor discard ability, can really cause serious issues.

The Italians & Axis Minors including Rumania, Bulgaria and Hungary – the Italians appear to be the worst faction in the game. For one, they are saddled with a  discard capability of only 2, which is still better than the French’s one, but can lead to the same issues of hand clog. Second, their Leader-to-Squad ratio of 1:6 is by far the worst in the game. This means that you will often find yourself with several units that are outside of Command radius and that will require 2-3 additional cards to be able to get them in the fight to do some damage. The Italian Fate deck is the weakest among the factions and must be played with much care and thought. They have one fewer Move Order and one fewer Rout Order and they dislike close combat because they have fewer Ambush Actions.  There are also 6 Jammed and only 5 Sniper Events in the deck so your weapons will break more and your sharpshooters will keep their heads down and fire less! Their units Morale is fairly standard on their unbroken sides but once broken, they become less than average and will be finished off more easily than other factions, who usually have a better broken morale. There are also a higher rate of Cower and Prisoners of War Events, which reflects their historical tendency to run from combat and get out of the line of fire. They also generally have lower Firepower and Range which is historically accurate as they had poorer quality weaponry and little military training. What does this mean when you are stuck playing with them? Keep your units in cover, stay away from other units to avoid Melee and always have a Recover Order in your hand to save your soldiers!

As I mentioned earlier, I have not had a chance to play all the scenarios in CC:M but can share my observations about them from reading through the Playbook. The great news is that CC:M comes with an additional 12 scenarios which brings your total playable scenarios to 24 if you own both CC:E and CC:M. If you happen to own Battle Pack #1 Paratroopers like I do, you have a total of 34 playable scenarios.  The new scenarios appear to have a lot of focus on terrain such as hills, rivers, etc.  I can’t wait to play Scenario #17 Little Stalingrad as it is simply a mass of tightly packed buildings that allow for a lot of interesting cover and fire possibilities. And then Scenarios #23 and #24 have very little terrain and are simply fighting over open desert terrain.  This will make for a very bloody and fast play but it should be action packed and exciting.  Scenario #20 is an interesting fight with the Russians taking on the Finns in perhaps the most wood covered map in the game (reminds me of Scenario #1 in CC:E).  You can expect a lot of close combat in that one.  Conversely Scenario #23 (mentioned earlier) features the Italians versus the British on a featureless desert map where the only cover is a handful of trenches on each side.

While the follow-up may be called Mediterranean, the truth is the scenarios come from all over the war’s European Theater. You’ll find in the Playbook battles represented in Poland, Finland, Northern France and Holland. So while the title may say Mediterranean it simply is a catch all for battles from all over Europe. 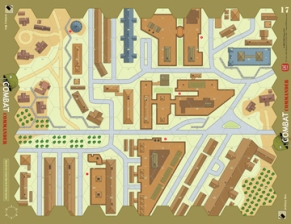 As you might have guessed from my treatment and review of the factions above, my biggest problem with this volume is the Italian deck. I don’t mind missing a turn or two to discard but this is my least favorite part of the game.  We have had this problem a handful of times in our other plays of CC:E with other factions but it is not something that plagues every game.  Now though, with the added French and Italian factions having poor discard abilities (only 1 and 2 respectively), this might become more of a common problem.  I do not know if there is a solution to this but in the end, it takes away from the enjoyment I receive from playing games.  An interesting side note, I noticed there are some unit counters included with the game that are never used in any of the provided scenarios (e.g. Italian Blackshirts). While I understand that these can be used in randomly generated scenarios and future published products, it would have been nice if they could have been used in a scenario so we can experience the units. Because I know this is not an expansion, I am not concerned with the fact that there is nothing really new here.  Some people might buy CC:M expecting to see new rules, mechanics or card types introduced to the game. Other than the addition of the Molotov cocktail rules, there is no real difference between CC:M and the base set other than the new scenarios and factions. This is fine if you love the base system but if you’re looking for an upgrade or an improvement of the game system or game play, then you’ll have to wait to try out the other volumes including Combat Commander:Pacific or Battle Pack #2 Stalingrad, when new rules were introduced including urban sniping and air support, for example. Overall, this iteration of CC is as excellent as the first and will bring me dozens, if not hundreds of hours of gaming enjoyment!

If you love CC:Europe, you must buy CC:Mediterranean. It is a solid addition to the series and will add many hours to your playtime and enjoyment.  I find that the game is fun not because I am able to dominate my opponent due to my forces power, amazing weapons or superior numbers but because I was able to figure out the best way to utilize those forces and circumstances (even if they are terrible like the Italians!) I was given in order to obtain victory!  This edition will offer many new tactical puzzles and difficulties that will need to be figured out and this to me is the true reason that the game is FUN!  Look for my first AAR for Scenario #13 Tussle at Maleme later this week where my German forces were outsmarted by the Kiwi’s!

10 thoughts on “A Preview of Combat Commander: Mediterranean by GMT Games which is NOT an Expansion!”