Occasionally I will come across an image of a game or some bit of news and immediately know that it is something that would interest me and that I need to find out more about. When I saw the cover image for a new game coming out from High Flying Dice Games called SAC: All Out Nuclear War Against the Soviet Union, October 1962, I just had to know more. The cover picture showing a lone B-52 Bomber replete with jet wash coming out of its engines and barreling down on a target is very evocative and immediately drew me into the conflict. As we have done several interviews with the designer Paul Rohrbaugh, I immediately reached out to him to get the low down on this upcoming design. 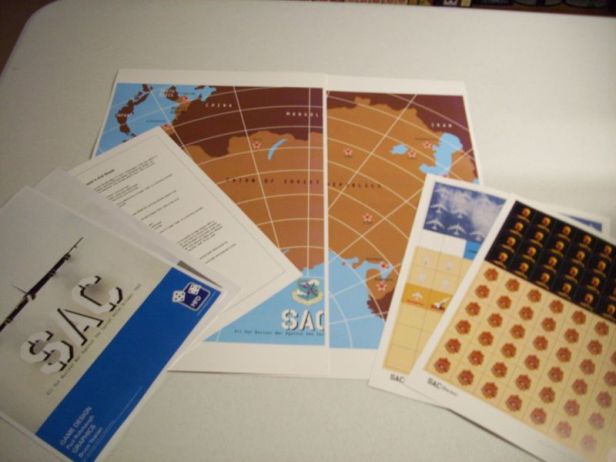 Grant: What was your inspiration for this very cool game on all out war on the Soviet Union during 1962?

Paul: The classic NORAD game (published in 1973 in Conflict Magazine) by Dana Lombardy was the inspiration. That game portrayed a Soviet strategic bomber offensive on Canada and the US. I got NORAD when it was new but thought it was too simple at the time and put it away. A few years ago I “rediscovered” the game and really got into it. I was inspired to do a “counterpart” with US Strategic Air Command (SAC) taking the war to the Soviet Union. I also added some “tweaks” of my own to use a six sided die to resolve combats in the game.

Grant: What would you classify this game as?

Paul: SAC, like its inspiration NORAD, is a very simple, introductory level game.

Grant: What historical parameters would have led to this situation?

Paul: I set the game in the Fall of 1962, assuming that the Cuban Missile Crisis “went sideways” and all-out nuclear war was the result. Although both sides had ballistic missiles, the primary delivery system for the nuclear weapons were still the strategic bombers; for the US that mostly meant waves of B-52s.

Grant: For those that don’t know, what does SAC represent?

Paul: Strategic Air Command. This was and is a separate branch of the US Air Force whose primary responsibility is to deliver nuclear ordinance at any time. Curtis Lemay was the first commander of SAC and a huge “force of personality” behind its creation. At any given time, at least one third of SAC’s planes are in the air, another third ready to take off within minutes of an outbreak of war and the other third being readied for operations.

Grant: What was your design goal with this game? Who is the audience you were designing for?

Paul: I hope all of my games can be vehicles to learn more about history and how/why warfare is often futile and can lead to unforeseen consequences that often make things worse for humanity. SAC is a very simple, introductory level game that plays in less than an hour. Curtis Lemay and many, many others in the military (and not just confined to the USA) believe a nuclear war is winnable. I hope all who play SAC can learn from and enjoy the game, and whether such a contention is valid.

Paul: The US has 24 B-52 bomber units, 6 of which are fakes/dummies (all set up with their generic sides up), and if playing with the SSN variant, up to 6 Ethan Allen class ballistic missile submarines. All of the B-52 units set up on the polar north map region and a number of SSN units equal to a DR set up in any all sea map area(s). There are no stacking limits. The B-52 units move one map space at a time until they reach a map space with a target city. SSN units are simply placed during any US movement phase in any Soviet target city map space. 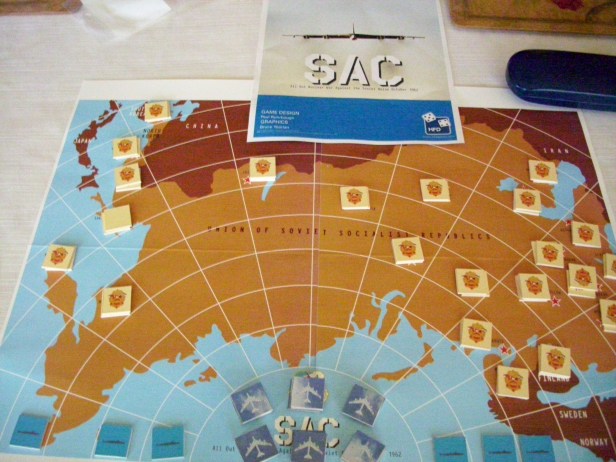 Grant: How does the US player use dummy units to deceive the Soviet player?

Paul: These are moved about the map in the same manner as “real” B-52s and can be intercepted by Soviet interceptors or SAM batteries.

Grant: What assets does the Soviet player have in defense?

Paul: The Soviet player has 16 Mig interceptors (17, 19 and 21 types), 5 SAM batteries and 25 Dummy/Fake units. If playing with the Warsaw Pact variant the Soviet player receives 1 additional Mig 17 and 1 additional SAM. These set up in any of the target city map areas, generic Soviet Air Defense side up (and again, no stacking limits).

Grant: How does the Soviet player use dummy units to deceive the US player?

Paul: The dummies and Mig interceptors can be moved 1 space on the map each movement phase as the Soviet player desires, and can be used to hopefully deceive the US player as to the nature and strength of the Soviet Air Defenses.

Grant: What overall strategy would you recommend for both sides?

Paul: Game play is pretty simple. The US needs to destroy (“nuke”) as many target cities as possible with the B-52s and SSNs. The Soviet player is attempting to save as many as possible. There can be a fair amount of bluffing in face-to-face games for both players. Good die rolling can also be helpful!

Paul: The US player moves the B-52s (real and dummies) and places any the available SSNs. The Soviet player then moves their Migs and dummies. Where opposing units exist the Soviet player attacks (with the real Migs and SAMs if also present). B-52s also defend. Both players roll a die. A DR of 1 results in the target being shot down for no loss. A DR of 2 through 5 results in both the attacker and target being shot down. A DR of 6 results in the attacker being shot down for no loss. There is a variant Soviet “Coordinated air defense” rule that gives the Soviet player a -1 DR modifier if both a Mig and SAM are present in the same map area. After air combat is resolved a surviving real B-52 or SSN is turned up to reveal the nuclear mushroom cloud that destroys the target city. Play proceeds until all real B-52s and SSNs have attacked (there is no set number of turns to the game).

Grant: What does the board look like and how is the grid layout used? 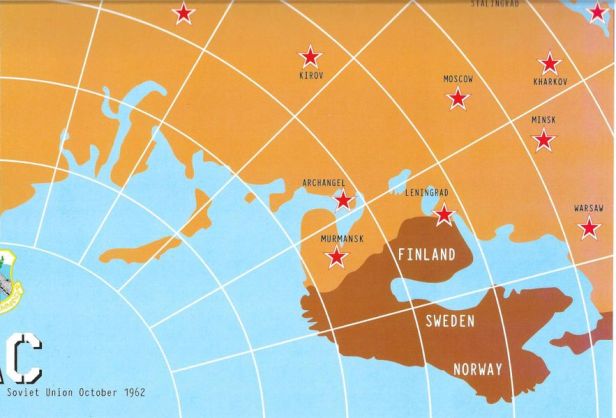 Paul: The map is a polar projection of the Soviet Union and has a square grid. I was going for a similar look and feel to the one used in the NORAD game but with more color (the NORAD game was largely done in black and white).

Grant: What variant rules are included in the design? Why not include these in the base game?

Paul: Variant rules include the SSNs, Warsaw Pact units, and coordinated Soviet Air Defense. I like variant rules as they introduce additional aspects of historical detail, help with replayability, and balance play between opponents of differing abilities. The latter is very important IMHO for an introductory game when you often have a novice who is new to wargames pitted against a “grognard” veteran who is teaching the game.

Grant: What are you most pleased with about the design?

Paul: I like how simple the game is to teach and learn, as well as how well it also plays solitaire. Games can be great ways to learn and teach history, learn more about the folks across the game table, and no one gets hurt. I sincerely hope all who play SAC learn and enjoy!

I hope you got a good feel for what this very cool hypothetical wargame on an all out nuclear attack on the Soviet Union is about. I think that these type of simple games with deception, bluffing and trying to outsmart your opponent are always fun, especially when they are focused on a what if type scenario that makes us all stop and give pause.

If you are interested in SAC, you can order a copy for $14.95 from the High Flying Dice Games website at the following link: http://www.hfdgames.com/sac.html

2 thoughts on “Interview with Paul Rohrbaugh Designer of SAC: All Out Nuclear War Against the Soviet Union, October 1962 from High Flying Dice Games”