If you don’t know, I grew up watching old war films as did many of us. Among my favourites is Battle of Britain. A topic close to my heart, a soundtrack for the ages, and a cast of actors surpassed only by A Bridge Too Far. I could not guess how many times I’ve watched that film, over and over again. Even today, I have a shortcut for the mp4 video file on my laptop’s desktop screen for ease of access. When PSC released their game Battle of Britain, which was a remake of a previous game published by TSR, I was very excited because I’ll try any BoB game and this one had plastic miniature planes in it!

Battle of Britain is a two player competitive board game that pitches the Luftwaffe against the RAF in the defense of Great Britain in 1940. The game touts more players, but you’re just splitting up the available forces, which means more downtime and less decision making for everyone involved, so for me this is a really a two player game. The German player secretly plans their raids by selecting target cards from a drawn hand and assigning them to the various groups available to them. As such, this one isn’t really solo suitable because it relies too much on disguising your flight paths, and some combat is resolved using hidden card selection as well. 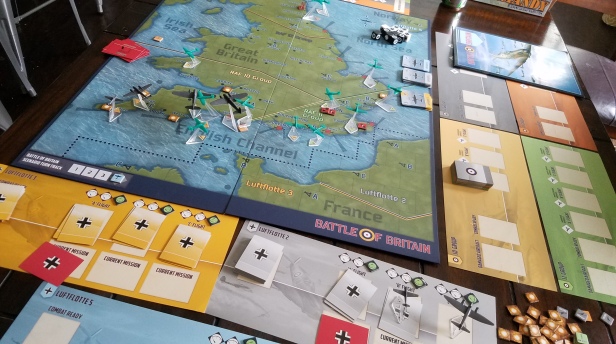 The game board is divided up into areas through which your flights must maneuver, either towards their targets as the Germans or in an intercept vector as the RAF. The German player has a large hand of cards that show all the possible targets and they are placed face down and assigned to each flight. So they know their intended target, and must try to do so whilst avoiding as much radar as possible. The RAF player is in a reactionary role and will need to intercept bomber groups as they cross radar nets or try to position themselves to dogfight them where they cannot intercept.

Intercept combat is, in theory, better for the RAF, whereas normal dog-fighting combat can be a crap shoot. The problem here is that the RAF player is limited to how many intercepts they can launch, based on a number of available intercept tokens. If the Luftwaffe ‘pings’ the radar net they have to stop in place and the RAF player has the option to intercept. If they do then a local squadron scrambles and pins the Luftwaffe in place and they will fight. If the RAF does not, or cannot scramble, then the Luftwaffe player can just fly on by to their target. Obviously you’ll want to intercept as much as possible, but again, there are limits.

If bombers make their targets they get to drop their payloads and accrue victory points for destroying targets, and therefore completing their assigned mission card. There’s also a tally of destroyed RAF aircraft that are worth VP’s as well. The RAF player scores VP’s equal to the number of Luftwaffe planes shot down. That might not seem like much, but a few bad raids and that number can sky rocket quickly.

Make no mistake, Battle of Britain is a dice chucker. There’s no combat odds, and no real modifiers. Each aircraft card in a combat has a printed number on it. You roll that many dice. The custom dice have either Roundels or Crosses printed on them. If more Roundels are shown after both sides roll, the RAF loses. Conversely if there are more Crosses then the Luftwaffe loses. Each faction has their own set of dice. RAF dice show a lot of crosses, and the opposite is true for the German dice. The dice look and feel great, until you miraculously, and spectacularly roll all of your own symbols and aid the enemy in shooting yourself down. But hey, it’s a dice chucker! It’s supposed to be random and chaotic, and it is. Sometimes the dice gods swing your way, and sometimes they do not.

The important part to note is that the strategy comes prior to rolling the dice. And there is strategy here. First off, the RAF player has some very important decisions to make about when to employ their intercept combats. The German forces are divided into three Luftflottes. Each Luftflotte has a number of sub-groups, or flights. Each flight has a corresponding plane standee on the map. That Standee corresponds to a holding box on the German player’s mat and has a number (up to six) of squadron cards. So when you move a single standee on the board, really you’re moving six squadrons of bombers and fighters in a formation. When they are intercepted by the RAF those six cards (or however many are left) are shuffled and three are randomly attacked by the given RAF flight. This is important because it’s possible that the RAF can get a favourable mix of enemy bombers and easily shoot them down. Easy VP’s for them and the German player is in a bind trying to bomb London with Me 109’s.

Conversely they could pull a bunch of fighters our of the stack and be in for a tough dogfight. However, if the RAF player is unable to intercept – in that they don’t have any intercept tokens left – and have to do regular dog-fighting the combat plays out differently. Each player picks up the cards from their flight and secretly chooses one. When revealed these two cards face off. Whoever wins the subsequent dice rolling shoots the other one down. The losing player then chooses their next plane. This continues until one flight is completely removed. Planes are removed due to being shot down, or if the dice rolling is a tie, both planes break off and return to base, and each player chooses a new card. As you can see, this combat is much more even handed. At least, compared to the random intercept combat. If you do really well and a card dogfights and shoots down two enemy cards they can become an ace pilot, which means they will get to roll one more dice in combat. But all in all the strategy is about positioning and reacting well, and then comes the dice-fest, which is very fun.

Is this one I need?

I love the air war, and seeing the little plane miniatures was awesome, so I was very happy to get to play this one. It’s not complex, and was easy to learn. It looks good on the table. For me this is a game that sits in the same category as 1754: Conquest – The French and Indian War from Academy Games or something like that. Easy to learn, fun to play, and remains a game instead of an overly involved consim. The dice keep it swingy and light, which means the game sits on the fun and relaxing end of the scale rather than the mind-melting zones of influence end.

The planning aspect from games like Bomber Command by GMT is one of my favourite things about the air war. I have Elusive Victory and Burning Blue which also involve a similar concept. Battle of Britain reduces that down to a simple choice of targets from a hand of cards. It keeps the game accessible whilst still giving you some things to think about with regards to route planning and strategic (and also diversionary) radar station destruction.

A concern I did have with this one is that some – not all – of the plane minis did not fit on the standees, they were too loose and needed to be glued, which was fine, but it means storage has to be a little more careful.

For a bit more information on the game play you can read over a series of Action Point posts written by Grant. In the 1st Action Point, we look at the two types of Attack options for the RAF in Interception and Dogfighting. In Action Point 2, we examine a German Mission Assignment and an example of a Bomb Run. In the 3rd and final Action Point, we covered the British Production & Repairs Phase as well as the finer points of squadron management.