Academy Games’ series called The Birth of America is a collection of dudes-on-a-map, historical wargames. There are three titles, 1754: Conquest, 1775: Rebellion, and 1812: The Invasion of Canada. Grant has played 1775 without me, but I’ve played 1812 with him and we most recently played 1754: Conquest. 1754 is the most recent of the games in the series and covers the French and Indian War. The French and Indian war is a fascinating piece of history from almost every angle you can possibly approach it. Academy Games prides themselves on making a game that is tactically rich, whilst maintaining it’s accessibility to gamers of all ages and abilities. As such, many non-wargamers can be found with these titles on their shelves. So let’s take a look.

This game can be played by up to four people. Split into teams of two. Each of the two sides has two sub-factions, The British Regulars and Colonial (American) Militia vs. the French Regulars and the French Canadian Militia. Each faction has a small deck of action/event cards that they will play in order to move their armies about the board and attack. The goal of the game is victory point based. Some of the key areas on the map have victory point symbols and you need to simply control more of those than your opponent does when the game comes to an end to win.

If that sounds simple, it’s because it is. 1754 is a game I’m cracking out with family, friends and anyone that wants to play. If I want some deep, crunchy war game with combat factors and odds based tables then I’ll turn to literally any other game in my collection. If I want to push cubes, put on the Last of the Mohicans soundtrack and throw some custom dice on a great looking map – this is what I’ll be playing. But with all that said, this title actually provides some pretty interesting strategic choices. With the ‘frontier’ so wide open this is a game that is almost impossible to turtle in. You’ll never be able to build an impenetrable wall and sweep the map. There’s simply not enough pieces and not enough movement points to allow it. 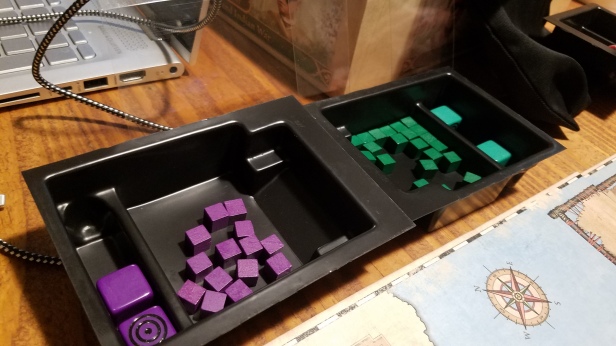 1754 models the small vicious skirmishes and larger pitched battles that occurred all over the region in decent fashion. You might find yourself investing a lot of time and resources into the siege of Louisbourg, but that level of commitment can leave you grossly exposed out in the forests and mountains to the west. So as mechanically simple as this game is, there’s some great fun to be had in picking and choosing your battles and commitments, trying to rally forces and max out your available dice pool and strike at opportune times.

The combat system in 1754 uses custom dice with either a hit symbol, a flee symbol, or a blank face, which is referred to as a command decision. Each faction has a number of dice (two or three) that match the colour of their factions pieces on the board. In combat you simply roll a number of dice equal to the number of corresponding coloured cubes in the space, up to the number of dice (again, two or three). The defender chucks their dice and resolves them first. Any hits are immediately inflicted and flee symbols mean those corresponding colours must remove a cube to a special holding box to be brought back onto the map next turn. Any command decision (blank faces) results are an optional retreat. So if you do a ton of damage you might risk moving a couple guys back out of the fray to minimize potential losses and so you don’t have a massive force charging forward without rearguard, or make a tactical retreat to save forces from extinction. Then the Attacker does the same thing. Boom! It’s that easy. You go back and forth until only one side survives. It’s so simple anyone can learn it. Which is exactly what this game sets out to accomplish.

The nuance in the combat system is arranging your forces pre-combat. Let’s look at the British side for example. The red cubes are British Regulars, well trained and professional. They only have two dice to roll, but those dice have only hits and command decisions. No flee results possible. The American Colonial Militia have three dice to roll, but those have flee results and fewer hit results. So if you can combine an area with both red and white cubes, you can end up chucking five dice if you have at least two red cubes and three white cubes. Now imagine if they were in an area with two native green cubes. they now get to roll the two native dice as well which means seven dice. If that combined force attacks, say, a force of only French regulars you’ll have a 7:2 dice ratio. A combat that heavily favours the British forces. And this to me is the crux of the game.

Anyone can push around cubes, but you’re trying to pick up those native forces, and mix your army compositions in order to get good dice pools for combat. But doing that at the expense of efficient movement, when movement is very limited by the cards in your hand, can put you in some tense situations. Which is something I love in a wargame. Make my decisions matter. Even a game this accessible you have to consider options and weigh up which gambits are the most beneficial for you at a given stage in the game.

One of the nice things about 1754 is that it introduces Forts to the system. If an area is being attacked that contains a fort then the defender rolls the fort die. It’s basically a 50:50 that the fort die will negate an enemy hit against the defending forces. Nice and simple, mechanically speaking, but an extra little piece to think about when surveying the battlefield. This is a perfect addition to the game from earlier titles as the strongholds were a key part of the French and Indian War, but you don’t get bogged down in prolonged sieges and extra complexities. Just some healthy attrition you’ll need to account for when really making a push against a region containing a fort.

Should I pick this up?

This isn’t the biggest, deepest wargame ever. But it’s a chance to recreate history in a quick, accessible and beautiful game. If you want a hardcore French and Indian War simulation there are others out there. But can you play those with everyone on game night? 1754: Conquest can play four people and doesn’t take all that long. It’s a game that you can play with anyone that has the capacity to play Risk, but isn’t a ridiculous slog like Risk. Also the history involved is interesting but not overwhelming. Playing with cards and events that highlight key commanders or turning-point battles open the mind to learning and education without getting bogged down in minutia.

I like the Birth of America Series, and I like 1754 more than I did 1812. It’s a fantastic introductory wargame. I found the game to be more compelling and vibrant, whilst being more strategically focused. This can help new players to pick up what they “should” be doing, but it doesn’t have to hinder you in creating interesting new strategies. I had a good time with this one, and now only need to play 1775: Rebellion to complete the series! 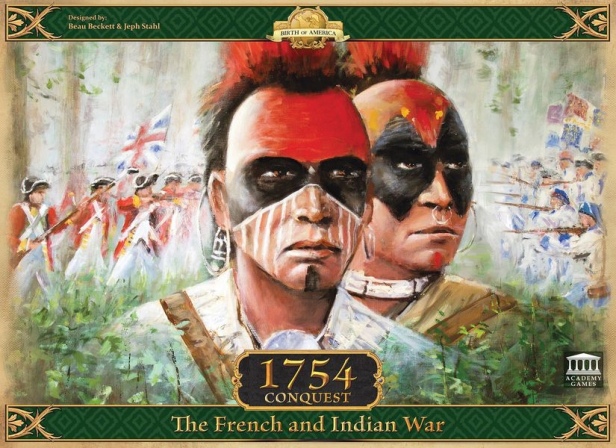 2 thoughts on “Review: 1754: Conquest – The French and Indian War from Academy Games”