A while back I took a look at Where There Is Discord from the now defunct Fifth Column Games. It’s a big game, both in scale, and physical size-wise. It mainly revolves around the air/naval combat and political situation around the Falklands as the British task force steams towards that frigid, barren rock. I made a video about that game after having played it and you can see it here. In that video I mentioned I hadn’t seen a smaller scale game about the Falklands, and then low and behold, not a couple of weeks later, I came across Heroes of the Falklands from Lock ‘n Load Publishing.

This was something that I simply could not pass up the opportunity to try out. We’ve played a few games in the LnL system, namely Heroes of the Pacific and Heroes of Normandy. Both of those were WWII titles, which is a very popular setting amongst wargmers. At the time of playing those we were using the v4.1 rules, which are divided into two books – WWII and Modern. We obviously used the WWII in those titles. By the time I actually got Heroes of the Falkands to the table, LnL had put out it’s newest edition of the rules v5.0 which basically combined the two versions, and then tweaked the rules and added huge extended examples of play, diagrams and overall streamlining of the rules. If you’ve seen the new v5.0 rules, you’ll know it’s a ring bound tome, consisting of around 250 pages. So how can I claim it’s streamlined? Well, tentatively.

Heroes Of The Falklands

First off, I didn’t read 250 pages of rules. Not even close. If you want to use the v4.1 modern rules that come in the game you will not be missing out in anyway, shape or form. I wanted to use that huge book to see if it was worth it. So I ditched the small ~40 page rules that came in the box and used the v5.0 rules. The book is organized and colour coded very well and to look up rules is a dream. I’ve never had a rule book that can initially seem so bloated be so accessible. Does it help that I know the system decently, and the changes from v4.1 aren’t super radical? Yes. But I was able to read about 20 pages of rules, put it on the table and play immediately. If you’ve never, ever played a tactical game, or even never played the Lock ‘n Load Tactical System, then that tome is made for you. It’s there to teach you the basics from the ground up with detail, examples, pictures and designer notes. For veteran’s of the system, it brings everything into one easy binder that can be used across every title and expansion in the system, which is a welcome reprieve in my eyes. Do not be intimidated by that book. It is there to help and dies aces in that regard.

Anyways, onto the game itself. Whatever you think of The Falklands, it’s undeniable that the conflict was a fascinating one. Both from a geographical, political and militaristic stand point. Heroes of the Falklands is a tactical game where your counters are either squads of three or four men, or single man counters like leaders, medics, snipers, and heroes. You’ll be navigating terrain on that individual scale, like crossing a road, entering buildings, even shooting out of a bell tower. Why I mentioned Where There is Discord earlier is that Heroes of the Falklands gives an entirely different scale and feel of the samish conflict. You are the boots on the ground and the fighting is furious, close, and deadly. Some of the maps are very sparse with terrain and you’ll need to be canny with your employment of mortars and air strikes to pin enemy units and positions before being able to move safely. Other maps are dense urban areas where you can’t spot more than a few hexes away with all the corners and blind spots. 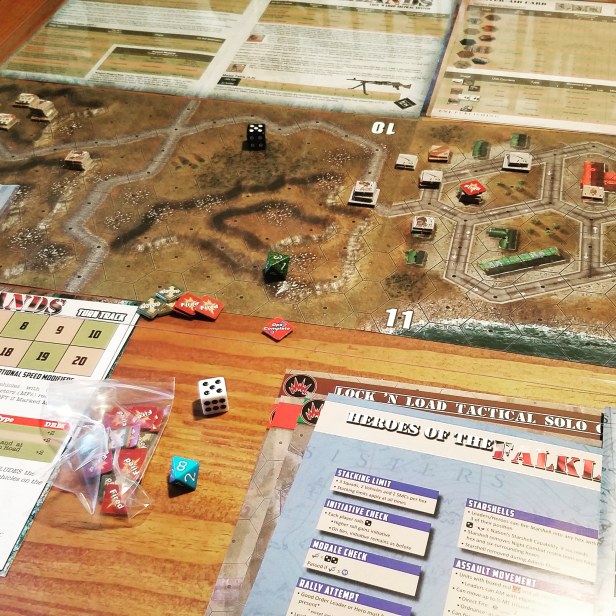 Either way, you get a rich tactical feel to the game in a conflict that, for me at least, is a very meaningful topic. I was born six years after the conclusion of the conflict and many of my peers had fathers, uncles and other relatives fight in the war. So playing a game about a conflict that directly affected the lives of those I know has an interesting feel to it, especially since the politics and the sovereignty of the islands, as well as the strategic importance (or perceived lack thereof), leave many people to be very reticent about the loss of life over the place.

For the Argentinian regime the capturing of the Falklands was a massive political success, and hugely popular with the masses, who were otherwise living under an intense military rule. On April second 600 Argentine marines and commandos landed in Port Stanley and after some small firefights accepted the surrender of the approximately 100 British combatants, of which only 2/3 were professional soldiers or seamen. Heroes of the Falklands gives you a bunch of scenarios, of which a significant amount are the British liberation of the Islands when the task force arrived. But they did create a few “what-if” scenarios, so you get to put up much stiffer resistance in defending the beach landing on initial invasions. Whilst a fantasy and a-historical, they do make for some excellent tactical situations. 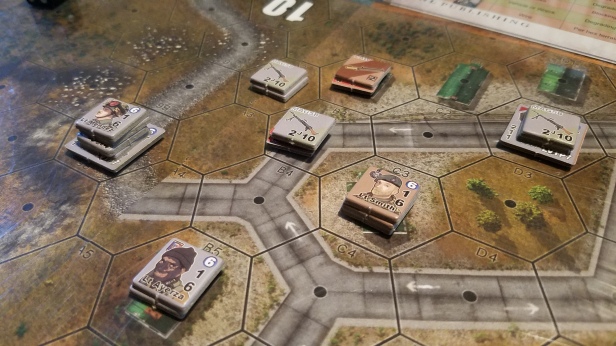 The combat system in LnL Tactical generally is a fairly unique one. I remember first learning the system and being a little confused by all the rolls needed to conduct combat. But, effectively, it boils down to the attacker and defender making opposed rolls, and then, the difference between those rolls as a modifier for a morale check to see if the target breaks. Some games I feel like the dice rolling can be very swingy and random, but what I enjoy about LnL Tactical is the sheer volume of dice rolling. The more rolls there are, the more mathematically stable the game is, as the larger sample size of rolls means you should see more even keeled games that don’t tip on a couple of bad rolls.

Heroes of the Falklands pits Argentinian troops and fresh faced conscripts against a well trained and disciplined force of career soldiers in the various PARA and Royal Marine outfits you’ll deploy. Typically, units roll a six sided die to attack with, but not the British. This game gives them an 8 sided die to roll, so they can achieve better attacks. At first I was worried about the balance of this game, but typically the British are outnumbered so that professional edge gives them an a-symmetric but equal playing field on which to fight. There’s a lot of support weapons and chrome in this one, which make the game engaging and interesting at every turn, and the vehicles give you some great challenges when assaulting with infantry. 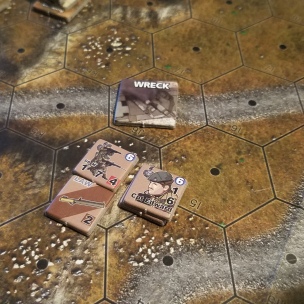 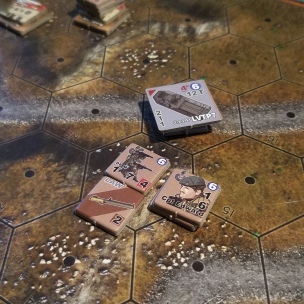 Do I need this game in my collection?

Need is a strong word, but I suspect if you’re a veteran LnL Tactical player you might be looking to collect the whole set. I had a blast playing this title, but can 100% understand that my nationality gives me a much more vested interest in this topic. Whilst playing this game, I had various documentaries going on in the background and found the whole experience engrossing. At times you get some really dramatic moments as a single man counter might hold down an objective heroically or reinforcements come barreling in at exactly the right time. 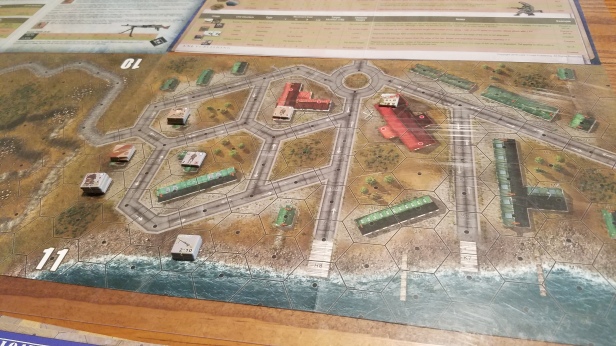 Heroes of the Falklands is a really fun game. From the history, to the what-ifs, they tried to make this game really come alive and tell the story of The Falklands on the table. Much of the scenario book can be stitched together and tells the chronological, and brief (relatively speaking) liberation campaign. If you’ve any interest in the theme, then this is a must-buy, but I wont tell you that it speaks to everyone. That’s the joy of the LnL Tactical system though; there is something for everyone. There’s so many titles from the past 80 years of conflicts that you’ll be hard pressed to not find one you like.

In the pictures in this review I’m using the X-Maps, which are enlarged versions of the maps included in the game, so you have larger hexes and it’s less crowded. These are sold separately and are entirely a vanity item.

3 thoughts on ““STAND BY PLEASE!” – A Review of Lock ‘n Load Tactical: Heroes of the Falklands from Lock ‘n Load Publishing”