In our previous Action Point covering Conflict of Heroes: Awakening the Bear! 2nd Edition from Academy Games, we examined the Activation System. In this Action Point, we will take a look at the combat system and how Attacks work. But first, I want to show you some of the interesting cards that are included with the game and how they can be used to enhance an Attack, take additional actions or even force enemy units to become Spent.

There are a few different types of cards in the game, including Action Cards, Bonus Cards, Event Cards and Weapon Cards. Each individual scenario will dictate what type of cards are included in the draw deck, how many cards each side will start the game with and how many cards will be drawn each round by the players. I really enjoyed the addition of the cards and look forward to using more of them in the future.

The cards will have icons in the upper left corner which will help identify the type of card and how and when they are generally used. Notice on the picture of the cards below, you will see a green lightning bolt (Action Card) and a blue plus sign (Bonus Card). I didn’t take a picture of the Event or Weapon cards as they were not used in our scenario. The Action Cards are played as an Action and these cards typically give the player additional APs, CAPs or allow certain actions to be taken for free.

For example, let’s look at Command Action. It reads “Take one free action of any cost with any unit.” This card allows for a player to identify any unit on the board, including a unit that is currently Spent, and take an action with that unit. These cards can be very powerful as they can allow for players to take the really expensive actions, such as a Rally which costs 5APs or Hasty Defense which costs 7APs, for FREE….and free is always a good thing!

The Bonus Cards are also very good and typically are played in connection with an Action that a player is taking, such as an Attack, and don’t cost an Action. “Luck!” is a great card that can be used by players to add +2 to any die roll, whether an Attack or Defense roll, by simply rolling a die and hoping for anything other than a 1.

Cards add in some uncertainty and also some flavor as they attempt to add in more thematic parts of the battlefield to the game.

Let’s take a quick look at how an Attack action is carried out. If you read our first Action Point, you will remember that each unit has a printed value in the upper left hand corner of their counter identifying their cost to Attack. This number is written in black text and should not be mixed up with the movement cost printed in the upper right hand corner in red text. For this example, I will be playing as the Russians.

First off, I have activated these 2 Russian Rifle units as a group and they will take Actions together, including movement and any Attacks. The reason that I am doing this is that their Attack Rating or AR is only a 3 and those German Units are taking cover in Woods (Heavy), which will give them additional modifiers to their Defense Value that I will need help to overcome. Doing a Group Attack will increase the main units Attack Rating by +1 for each participating unit.

First off, you need to understand what the target’s Front Defense value is. It is the number printed in red letters on the bottom right hand corner of the counter. The German Rifle units have a Front Defense (red circle) of 12 while their Flank Defense (blue circle) is lower at 11. 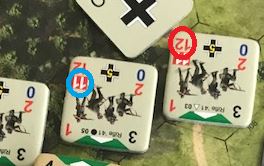 So, as my Russian units are firing at the fronts of the German Rifles, we will use their Front Defense Value. To this Front Defense Value of 12, you will need to add in any modifiers from their terrain, any fortifications in the hex and even any Hit Markers that they are currently carrying, but more on that aspect later.

In this example, the German Rifle unit that we are firing at is located in Woods (Heavy) and as such will add a +2 DM (Defense Modifier) to their Front Defense meaning they will be a 14. The Russians will then add up their Attack Rating, using the red Attack Rating number in the bottom left hand corner of the counter (not the blue value as this is for Armor Piercing). As they are doing a Group Attack, the Russians will identify a main firing unit, the right most Rifle unit in the picture, and then add +1 to that unit’s AR. In this case, the firing unit will have an AR of 4 (base AR 3 + 1 for Rifle assisting = 4AR). The Russian player also decides that this Attack is important so after calculating the AR, decides to play his Careful Aiming Bonus Card that will add +2 to the AR of the unit before rolling their dice. The firing unit will now have an AR of 6 (base AR 3 + 1 for Rifle assisting + 2 for Careful Aiming Card = 6AR), but wait there is more. Because the firing unit is adjacent to their target and at short range, they will receive an additional +3AR (If at long range, they would take a -2AR penalty). So their final modified Attack Rating equals 9AR.

Now, the firing player will roll 2d6 and add this to their AR giving them their final Attack Value. In this case, I roll a 5 which when added to the current 9AR, gives a result of 14! A hit is scored as any number equal to or greater than the target unit’s DV is a hit. If the final AV is 4 higher than the target’s DV, a critical hit would have been scored which destroys the target unit.

So with one hit being scored, what happens to the target unit? Is it flipped over to a reduced side? Does it take a numbered damage counter? No, there is a random element to this Attack Resolution and is something that I really enjoy. A “hit” means that a Hit Marker must be blindly drawn from the draw cup. 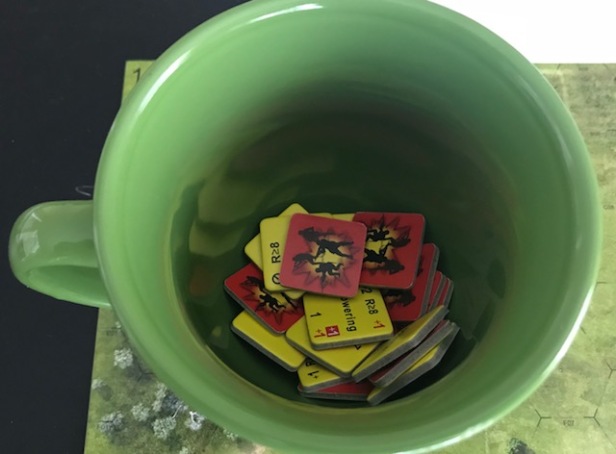 Contained in this draw cup, there are 20 Hit Markers, with some of these being multiples of the same marker. There are actually only 8 different markers as there are multiples of quite a number of them (Pinned x5, Suppressed x5, etc.). There Hit Markers are blindly drawn by the player being attacked and they don’t show this marker to their enemy, unless it is the dreaded KIA! This marker is then placed beneath the target unit and must be used in future Attacks against it as some of these markers change Flank and Front Defense Ratings, sometimes positively (such as in the case of Panicked or Cowering) and sometimes negatively (Panicked). These Hit Markers will also effect the units ability to Attack, such as with Stunned, or modify those Attacks (Cowering) by increasing the AP cost to perform those Actions. Once a single unit has accumulated 2 such Hit Markers, they are considered eliminated. 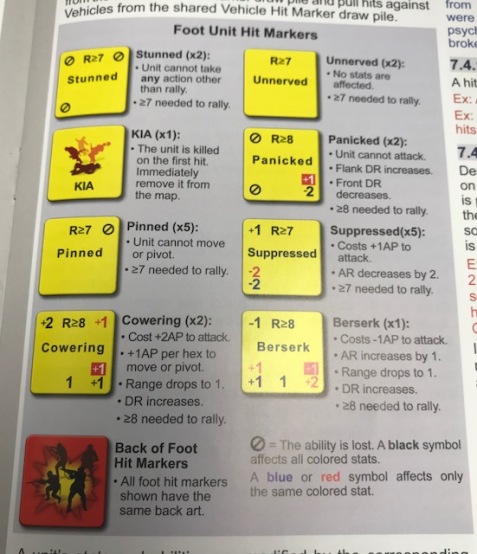 One other interesting point about the number of markers. There are 20 such markers and as they are taken out of the draw cup, and placed on units that have been hit, the odds of drawing the remaining markers from the cup increases. Once 4 or 5 such Hit Markers have been pulled from the cup, it is then more likely that you will draw the single appearing markers such as KIA and Berserk. In our play last weekend, we pulled that darned KIA counter several times. Each time it is pulled, the unit is immediately eliminated and guess what? That KIA counter simply gets returned to the draw cup so that you can possibly draw it again. Great fun and a level of uncertainty that creates some great tension and nail biting situations.

Combat is very simple in Conflict of Heroes Awakening the Bear! but that doesn’t mean that it is not well done. The “crunchiness” found in heavier tactical wargames is there with the various calculations of Attack Ratings and Defensive Values. There also is the addition of the cards and then the best part is the uncertainty affiliated with the Hit Marker draws. Not just the draws themselves, hoping and praying that you don’t get the KIA marker, but not knowing how your enemy is affected is a really neat addition to the game. Overall, a very good experience that is good for an introductory squad level tactical game, but also has something for the Grognard who loves crunchiness and strategy. I heartily recommend Conflict of Heroes and can’t wait to get my hands on the other expansions.