Not a new game by any means, but one that I finally got off my shelf and was able to play. Conflict of Heroes is a series of tactical titles from Academy Games that has been around for a good amount of time. I acquired the game as part of a trade, and do have the solo expansion for it. We’ll tackle that another time – but I’ve heard it’s very good and was a big selling point for me. Today we’re just diving into the normal two player version. There’s an optional three or four player version where you divide your forces up and play as squad leaders, but I doubt I’ll ever play that way. Anyways, let’s dive in!

I’ve played my fair share of tactical games, with only a couple of major titles left to knock off my list. With that in mind I’m always looking at tactical games with a question in mind: “What is the designer trying to do with this system?”. Tactical games are great, in my opinion, because they typically offer an experience that is somewhat realistic. What I mean by that is you or I, if we ever found ourselves in a combat situation, would most likely be in a man to man, squad level situation. It’s rare that any of us would actually be a four star general and lead entire brigades at huge operational levels. Those games are fun, but tactical games offer something more visceral.

Awakening the Bear gives you combined arms on the Eastern Front. Normally for a game with the tag line “Operation Barbarossa”, you’d expect a massive game of army groups, supply lines and pockets. But this offering from Academy Games gives an intimate feeling to a campaign that is often gamed on that huge macro scale. There’s nothing quite like having your teams dragging their wheel mounted medium MG’s diving for cover whilst German SMG teams pour on the 9mm fire. Conflict of Heroes is a system that uses impulses for activation. You choose to activate a unit and that unit gains action points to use for firing, moving, rallying etc. You only get to perform one single action though with the activated unit, and then your opponent will do the same thing with one of their units. Seems intuitive right? Well it’s only the beginning. You are only allowed to have one active unit at a time. So whilst I might be laying down the heavy fire with an HMG nest, a unit flanking on the other side of the map might have free reign to move if I don’t change my focus.

What I mean by that is that in order to activate another unit on the other side of the map to intercept the flanking enemy unit, I have to mark my active HMG nest as spent. That HMG nest can now do nothing else the rest of the turn, unless you want to expend some of your very precious (read: limited) Command Action Points. You’ll get a very small amount of these CAPs which can be used as universal Action Points (AP), even on units flipped onto their spent side. They’re a very powerful resource in that regard, but again you can’t use them willy-nilly as they are limited.

The single unit activation makes the game quite easy to learn, especially when teaching someone new. You only need to worry about one unit at a time. But as soon as you move past basic tactics the single unit activation can become agonizing. You’re faced with myriad timing decisions about when to fire, when to move, whether or not to take an opportunity Action, etc. If you can force an opponent to blow all of their APs and use units in certain firing positions on the board then you’ve got free reign to advance quickly on their positions without any fear of opportunity fire being incurred, as an example. There’s a ton of nuance to the strategies you can get yourselves into.

The components, as you’d expect, are top notch. Academy Games consistently puts out products that have some of the best pieces in the board gaming world. You can see a deck of cards in the box, but it’s not a CDG. Most of them are one time use event cards or bonus cards that enhance attacks, or can help you in other ways, but you have only a very limited number of these at your disposal and this is usually determined by the scenario. Check out the picture below – Awakening the Bear! has a full box insert like you’d find in a premium board game. Not pictured is the clear vacuum formed lid that keeps everything in there (even stored side ways) like a normal counter tray. I’m in love with the storage solution included as I don’t need to fork out money for my own. 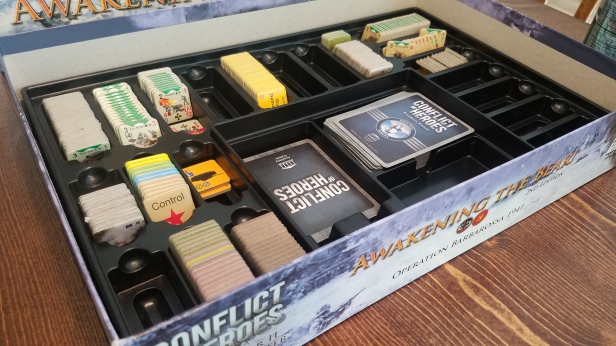 The combat in this one has one of the most fun systems I’ve ever seen. When you take a hit you draw a random yellow Hit Marker that has a random condition on the back and you secretly place it face down on the bottom of your unit. You do not show your opponent. That way, they have no idea what actual damage they’ve done to you. There’s always an element of the unknown. That is, of course, unless you draw the fabled KIA marker, which eliminates your unit outright if they draw that as their Hit Marker. The pool of markers isn’t massive with only 20, but it’s big enough where you shouldn’t draw it as many times as I do in a scenario, but such is my luck.

Seriously! I think I need to start holding preemptive memorial services for my counters that I lead into battle because if there’s an insta-kill marker you can be damned sure that I’ll draw it. 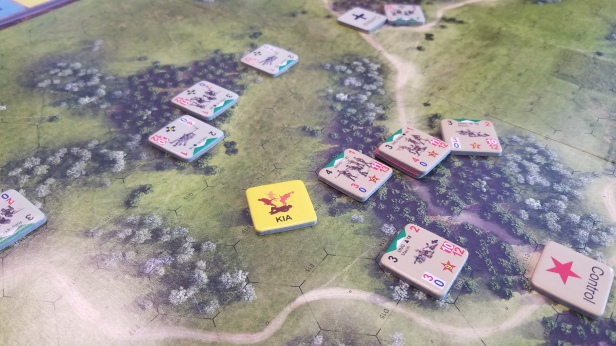 The other part of Awakening the Bear! that I liked, was the scenarios themselves. I’ve played a fair amount of Combat Commander and there started to come a point where some (not all) of the scenarios were just clear variations on attack/defend/exit the map scenarios. There’s nothing wrong with that, after all there’s only so many engagement types out there on a tactical scale, but it’s nice to come up with something new. Awakening the Bear! has a lot of combined arms scenarios as well, but just perusing the scenario booklet, and even the one pictured above was a type of engagement that was very refreshing.

There were objectives for each side to take and hold, but there was a sweeping pincer movement from reinforcements for the Russian side who were initially grossly overwhelmed by a stronger German platoon. The German platoon however was quickly flanked and then themselves had to re-position themselves to hold a larger area of ground with the new found objectives. It might not sound like much, but the scenario felt very fluid. I don’t know if it was particularly realistic, but it was very engaging to play. Normally, tactical situations are “move here, take the building”. Awakening the Bear! has that, but there was much more movement in the scenarios and not just one side being hamstrung and clinging on for dear life. Conflict of Heroes forces you to be proactive in your objectives. A welcome refresher.

Pick this game up. It’s really fun and has great production value. I’ve heard the solo is the best system out there, but I haven’t tested it yet, so watch out for my thoughts on that later.