Pendragon: The Fall of Roman Britain is the latest in the COIN Series of games from GMT Games, a system originally designed by Volko Ruhnke, that has taken off and become a wargame staple in the hobby. COIN, or COunter INsurgency, started off tackling modern conflicts such as the turmoil in Columbia, The Cuban Revolution, and the war in Afghanistan. Since then the system has been taken back in time to tackle more historically distant conflicts. Pendragon takes us into the 4th and 5th centuries A.D. and to the embattled Isle of Britannia.

If you want to take a look at the components of the game you can check out our unboxing video here. The game is exactly what you’d expect from a premium product from a flagship GMT line. The map is once again gorgeous, and reminiscent of the styles of Falling Sky: The Gallic Revolt Against Caesar and Liberty or Death: The American Insurrection. There’s a plethora of wooden pieces including the all important settlements, that look like small castles!

Pendragon revolves around 4 factions, there’s the Dux – the original Roman Army in Britannia, a faction with many forts and very powerful cavalry units. There’s the Civitates, the ruling aristocracy left over from Rome. They have wealth, culture, and a few military units, but have to tread the line of home grown forces and paid foreign mercenaries. Speaking of which, the other two factions are both outsider barbarian factions. The Scotti and the  Saxons. These two factions are some of the most unique in any COIN game, they deploy quickly and easily steal gold and pillage the land. Their units however can be paid off and hired as mercenaries by the Dux and Civitates at which point the units switch player control. 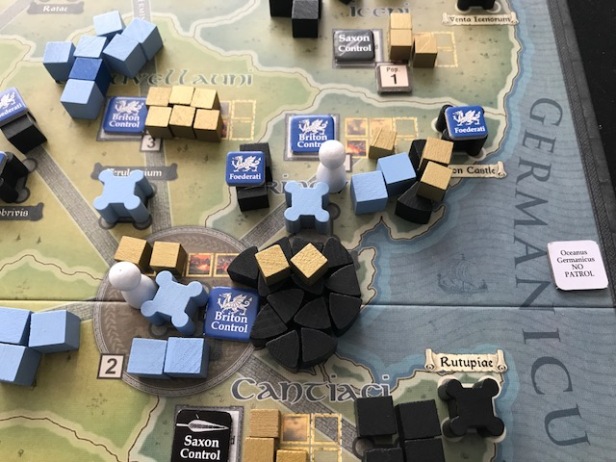 Politically/historically speaking, Pendragon has a lot of game in the box. There’s a few different scenarios which illustrate the various states of decay of the Roman Empire, or you can play the long game in which the Roman’s have strong influence to start. The roads are in good order and the Raiding factions seem to be less of a threat, but over the course of several Epochs the Roman empire collapses and retreats back to Italia and the resulting power vacuum and dearth of resources means the fighting quickly becomes bloody.

Combat resolves with some level of familiarity, but has a lot of cool nuances. Each faction has a “home” terrain where their units can more easily gain defensive/ambush bonuses, so picking your battles is very important. There were far fewer pitched battles in this game than in something like Liberty or Death, or Fire in the Lake. This stems from the nature of the two barbarian factions. The Scotti and Saxons both use raiding tactics to establish themselves on the board. The controlling player uses a number of dice to roll and places that many pieces on the board in a space adjacent to a legal sea-zone or friendly stronghold. It means you get huge hordes of war bands just dumped onto coastal areas that start stealing gold and going ham on the garrisoned forces. I can only imagine the abject terror that the locals would have experienced at the hands of these marauding bands of steely warriors. 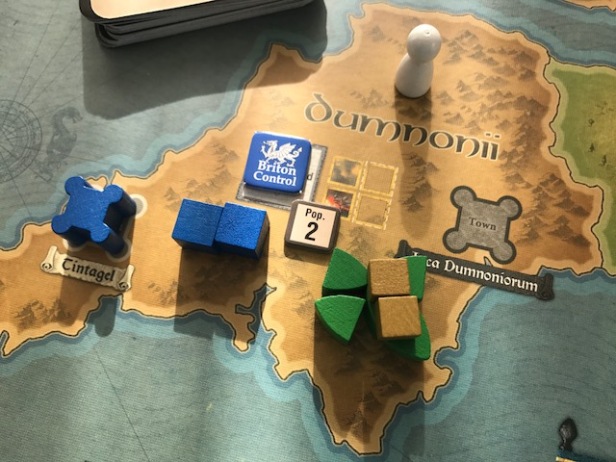 Each barbarian war band is only worth 1/2 a strength point in pitched battles, so you’ll find they spring up, take your gold, and then return home to cash in on the spoils of war. This makes for an effective harrying technique as the barbarians. The barbarians need to do this kind of thing in order to actually earn money in the game, but it means that there’s rarely large stationary forces in a given region. I personally think that the way the barbarian factions work brings me back to the feeling of some of the earliest COIN games in the series. As the Dux or Civitates you’re trying to stamp out a thousand barbarian fires whilst maintaining some kind of economy, or growth. As the barbarian factions the raiding is never enough, you’re always needing more money than you can plunder and bring home. On top of that you’re trying to keep your weak forces in place long enough to establish them into full strength troops and establish strongholds. This is time consuming and often your war bands will be swept away by Dux cavalry or Civitates trained troops. This process can be very frustrating and take a committed player to pull off. It is not for the weak of heart or impatient.

This frantic feeling, of trying to claw together enough resources, and put band-aids on your fragile alliances makes this game constantly engaging, engrossing and exciting. The combat is performed in a few different stages where ambushes can knock out units before they have the opportunity to attack, but failing to set up an ambush can make you susceptible to cavalry over runs. Either way, battle is both bloody and prolific. Rarely were there times in Pendragon we had severe stalemates – something that I as a cautious player typically get myself into.

Should this be my first COIN game?

No. No, it should not. I say that because the game is on the more complex end of the COIN spectrum. It’s also quite different from the other ones in it’s focus, and I’d hate for you to get a false impression of what the rest of the series is like. In Pendragon, there are no Support/Opposition markers like in every other game. The game has a much heavier economic focus than any previous game in the series.

On top of that this game has a lot of moving parts. The core mechanics with the event cards, action/special activities are very familiar to COIN enthusiasts. However this game is draped in historical detail and as such has a lot of small rules. That can make the learning curve quite steep. I did not however feel like the game was overly crunchy or complex for complexities’ sake. Everything in Marc’s design is very purposeful and that comes out in the overall feel of the game. I loved Pendragon, but this isn’t my first COIN rodeo. That’s not to say that you couldn’t jump into the deep end (so to speak) and buy this one right away. There’s a detailed and exhaustive Playbook that will guide you through a few dummy turns.

Now, if you’re a solo gamer there’s also great Non-Player AI’s in the game that allow you to play with any number of players, and you just automate the ones not being played. Or you can just do your typical Best Possible Move style game, but having the Non-Player bots can help put you in situations that are very unexpected and keep the pressure up in ways that are not of your own creation.

Get this game. My only real complaint with the game is that the box artwork and some of the card artwork is CGI generated and to me doesn’t live up to the grandeur of this game. It felt a little like an early 2000’s PC game graphics, which is only a shame because GMT has some unbelievable box art like the Wing Leader Series for example. So with that said, if my only complaint was entirely cosmetic, and is such a non-factor in the game play itself, you can be assured that Pendragon is top notch. An eternally worthy edition to the COIN family. I’ve not heard any purists shunning the game for breaking the mold, but I for one love the versatility this game has shown the COIN system of displaying.

Understand a full game will be very long, especially with AP (our games are prone to this) and that the best possible experience is with 4 players. But playing with any player count still gives a deeply satisfying and richly rewarding gaming experience. You’ll also learn whilst playing this one. There’s so much extra information in the Playbook and Designer notes from Marc that really helped to open a new world of historical learning for me.

Use the search function on the blog to find multiple interviews with the designer Marc Gouyon-Rety, Action Points from Grant on the various aspects of the game, and a video review with a mechanics overview, as well.

5 thoughts on ““An Eternally Worthy Edition to the COIN Family” – A Review of Pendragon: The Fall of Roman Britain from GMT Games”