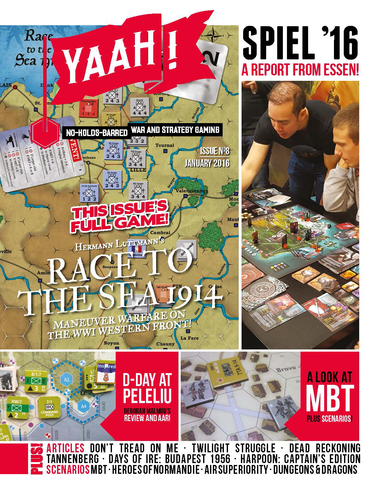 I have been fortunate to obtain a copy of Yaah! Magazine Issue #8, which is a wargame magazine published by Flying Pig Games that includes articles on upcoming games, reviews of recently released games, strategy articles and tips and a pack-in game. The game included in the magazine is called Race to the Sea 1914 designed by Hermann Luttmann. After the Battle of the Marne was won by the Allied armies in early September 1914, the Germans withdrew to a formidable position north of the Aisne River and entrenched themselves on the high ground. Numerous French efforts to dislodge them failed and the two great hosts stared at each other from their respective trenches. German General Erich von Falkenhayn and French Marshal Joseph Joffre realized that there was much open, exploitable territory to the north of these solidified lines and each prepared to maneuver around the flanks of his opponent. These mutual and simultaneous flanking moves resulted in a series of headlong battles that gradually shifted the forces north toward the French Channel coast. These maneuverings yielded a series of encounter battles at Picardy, Albert, Artois, La Bassee and along the Yser River. But these engagements were ultimately indecisive and the campaign’s final stage was set for the dramatic clash at the end of the “race”, at the ancient textile city of Ypres.

The game system is based on the same system used in the game Dead Reckoning by Tiny Battle Publishing. There are no dice, no CRT’s, no lists of modifiers and no combat factors. A card-based combat resolution and initiative bidding system drives the action, along with a random event table that provides variety, WWI theme and campaign-specific events.

All in all, a really impressive amount of content that is worth the price.