Welcome to another painting guide for Flames of War. For Christmas, I picked up the brand new Panzer Kampfgruppe from Battlefront. This box set was released in conjunction with their Armies of the Late War book, that was used to bring all the Late War stuff in line with V4 of the new rules. For the Germans, I only had 3 Stug III’s and a couple of random Zvezda models, so wanted a jumping off point to a larger, more organized force. So here we are! I started with the Panzer IV’s, making the Ausf H variant used in Normandy 1944.

The construction was very easy with single piece track and road wheels. I like the Zimmerit anti-magnetic paste detailing on the models, although this would have been discontinued at this point in the war so might not be all that historically accurate. 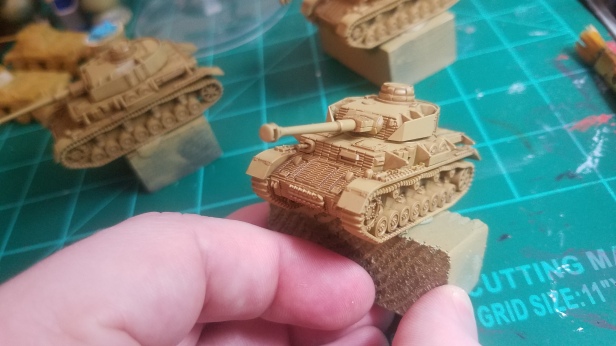 The detail was crisp, and very clear. I based the tanks in Italian Armour, a bright sandy colour. I like using this colour because I think the brightness makes it stand out a little more, and gives some good contrast to the camo and weathering applied later on down the line.

After spray painting them I used Army Painter Soft Tone (a light brown) to do localized pin washing in the details of the tanks. Normally, this can be quite time consuming but with the Zimmerit paste there were parts of the model it was easier to be much more liberal with the wash making this process fairly quick. I used sticky tack and a block (see below picture) to do the Schuertzen separately to make the painting process with the tracks and wheels easier.

I used MSP’s rust brown (I think) for the tracks. It might look garish at first, but with only very simple weathering, the final effect looks great! Make sure you remember to hit up any spare track link you have draped over the tank.

If you’ve read any of these other painting guides you’ll be familiar with my ‘Pavement’ grey from Walmart. This cheap acrylic paint is so handy and versatile I use it all the time. Best 99 cents (plus sales tax) I ever spent. I hit up the gun muzzles, road wheel tires and other small details, like machine guns and tools on the hull. With the wheels (and this is a general theme) I was a little rough. This isn’t a Van Gogh. After all the shading and weathering, and the application of the Schuertzen, any imperfections will be neatly covered up. 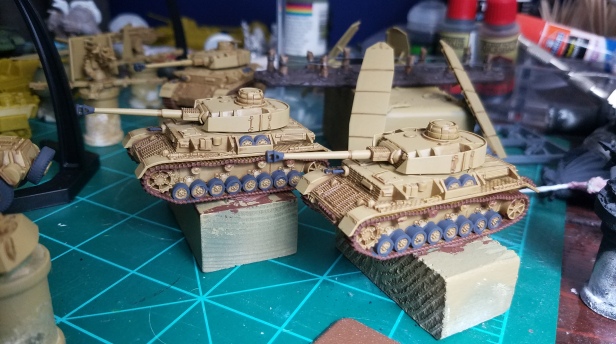 Now that all the base coat colours have been applied I used that pavement colour to dry brush the tracks, and then used a Nuln Oil black wash (from Citadel) over the tracks and road wheels. I forgot to take a picture of these steps, but you can check out the technique over here: Stug III Painting Guide. I also then washed all the other grey parts of the miniature with the Nuln Oil. Nuln Oil is a fairly dark wash, so you don’t need a lot of it, and can even thin it down 1:1 with water for a more gentle look.

Next, came the application of the Schuertzen. I just used super glue. Honestly, you don’t need me to tell you to do that. I feel like the contact points on the Schuertzen are a little flimsy and small and the extra gripping power of the super glue will help immensely, especially so with the side skirts as they are somewhat delicate.

For this platoon, I went for a simple camo using a dark olive and making small curved lines all over. If you look at the green paint on the Zimmerit paste it looks very bright and clean, and removes the cool depth from the texture. After the green dried, I applied a pin wash of green to those areas in order to give back that definition.

The process was repeated for a rusty brown colour to complete the camo scheme. The brown I use was actually the same one I used to base the tracks with, but you can’t tell with how much darker the tracks are because I used the grey dry brush and black wash.

The box set came with enough Water Slide decals to have a couple left over. I applied these to the turrets of the Panzer IV’s after doing some research about where the markings should go. I was tempted to put them on the Schuertzen but decided against it after looking through extensive contemporary images from the Normandy Campaign.

I then cracked out one of Citadel’s Technical lines called Typhus Corrosion. It’s brown/olive paint that is very thin, almost a wash that has sand mixed into it. This gives an excellent oily, greasy, gritty feel. At this small scale though it looks like good wet mud and the viscosity of the paint means it creates great looking splashes. I also applied some streaks to break up the sandy undercoat of the tanks. I used a technique where I loaded the brush and dabbled the paint heavily where I thought the mud would be thickest. I then went back over those parts with a larger brush but with much less paint on it to give a slight gradient and more messy look to the mud. This will ruin your brush, so you will need to use a cheap acrylic brush for this one.

And this is the final product! I’m very happy with how these look. The models have great detail and the only egregious error in the kit is the gap on the gun mantlet, which, frankly, I don’t care about. If you look at the tank on the right, you’ll see the side armour isn’t straight, but looks like each panel is  slightly off centre. Each kit comes with the option to do the battle worn armour like that or the normal fresh-off-the-line armour as pictured on the left.

I picked up some Plastic Soldier Company Panzer IV’s to flesh out my formation, so you can look forward to comparison between the two kits coming later on down the line.

Anyways, thanks for reading and you can use the search tool up top to find a bunch of other 15mm Flames of War models like this one.

One thought on “Flames of War: Battlefront’s Panzer IV H Assembly and Painting”