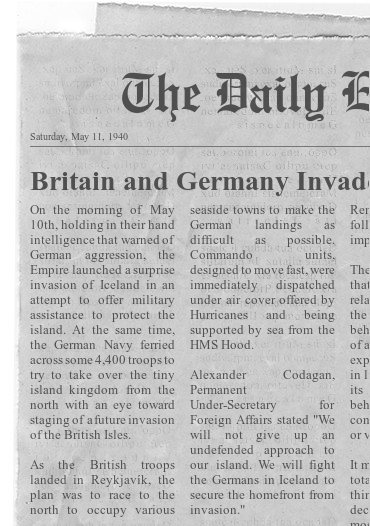 Operation Icarus from Tiny Battle Publishing is a simulation covering the hypothetical German invasion of Iceland in an attempt to establish a base from which to invade Great Britain during World War II. The game looks at the event at three different time periods, May, 1940, July, 1940 and June 1941, with each of these dates having its own playable scenario. The Americans also get involved in scenario 3 during June 1941 with Warplan Rainbow. The game is fairly simple to play but offers some very interesting chrome elements to the design to create a thematic feel for the fictitious battle.

In this Action Point, we will take a look at the Naval Movement Phase, Spotting and the Naval Combat Phase.

As this hypothetical game is based on a naval invasion of Iceland taking place concurrently with Operation Sea Lion, and includes several different types of naval units such as U-Boats, Submarines, Transports and Warships, there are rules that cover Naval Movement, Strategic Reconnaissance and Naval Combat. I will warn you in advance though, the rules for this element of the game still need some work in my opinion. We read the rules, struggled with their meaning, as well as interpretation, and finally had to simply decide amongst ourselves what seemed right and go with that. So, I only say that because those that play this game might look at our descriptions and wonder. 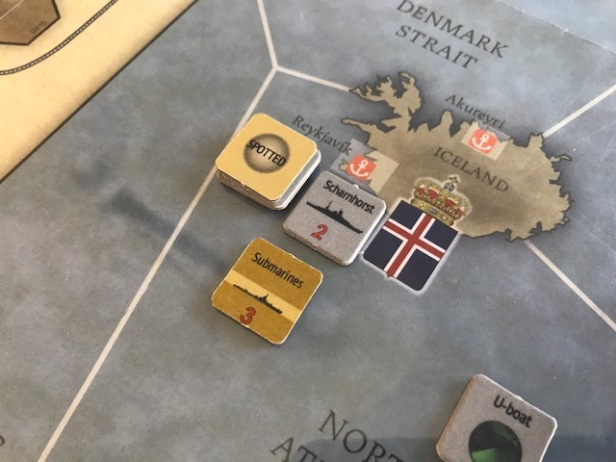 In Operation Icarus, as the game is an invasion of Iceland, which is surrounded by oceans, the players must ferry their units across the Norwegian Sea or the North Atlantic in order to initiate the invasion. The Germans disembark from the port of Trondheim in Norway and their shortest route is to use the Norwegian Sea to land on the north side of Iceland at Akureyri. The British fleet leaves from Scapa Flow and their shortest route to landfall is through the North Atlantic to land at Reykjavík. Naval units can only move one space at a time and they start on land, which represents their presence in the ports, so they will always spend at least one turn on the high seas which makes them susceptible to attacks by Submarines and U-Boats. The Transports that are used by each nation have differing carrying capabilities, as the Transports used by the U.S. and British can carry a maximum of 5 battalion-level units or trucks while the German Europa can carry a staggering 10 different units or trucks.

When these Naval units reach their destinations, they must switch from the strategic map view of the sea zones and move those units to the tactical view maps that show areas where they can land in ports. In order to land in a port, the Naval units that are carrying troops must simply end their movement in a full sea zone adjacent to a port and then disembark their Land units. The rules were a little vague on movement, but we finally figured it out and didn’t really use the rules that much anyway as our scenario simply used a Naval Movement phase to start the game and a second Naval Movement phase during turn 4 when British reinforcements were ferried across the North Atlantic to land in Reykjavík to bolster the attacks of the initial wave of underpowered Commando units.

In order for Naval units to attack or be attacked, they must be Spotted. How and when to spot depends on the type of target being attacked. The action of Spotting takes place in the Naval Combat Phase. During the Naval Combat Phase, both players can use their Naval units, including their Transports, to attempt a spot of enemy Naval units which are located in their same sea zone. The only exception to this rule is that Submarines and U-Boats cannot be spotted. In order to Spot a Naval unit or stack of Naval units, you simply have to assign one of your Naval units to this task and can focus on a single enemy Naval unit or stack of Naval units. This Spot can only be attempted once each turn.

To Spot, you simply roll a d6 and compare your result to the current Poor Visibility Die Roll Range that is assigned by the scenario. If your die roll is greater than the Poor Visibility Score, then the target is Spotted and the Naval Combat can begin. If the roll is a failure, you simply place a Poor Visibility marker on the Naval unit or stack and this means that no other units can attempt to Spot that target. Submarines and U-Boats can also Spot Naval units but cannot be Spotted by other Naval units. If the Subs or U-Boats ever attack a Spotted unit, they are immediately Spotted and can be fired upon by any surviving units in that sea zone. Also, Subs cannot Spot or attack other subs. That is not what this game is about. We had a little bit of difficulty finding the Poor Visibility Die Roll Range value on the scenario card. I’ll chalk it up to “old eyes” but I wish it would have been more clearly visible. I guess I failed my Spot roll!

Now onto the exciting part, Naval Combat. You may attack a Spotted enemy ship or ships stacked together if, and only if, you have combat capable naval or air units in the same sea zone. Naval Combat takes place between an attacking force (whether Spotted or not) in a sea zone and a Spotted enemy force. Ship-to-Ship combat between Spotted units is simultaneous. If there are Air Strikes, these are executed before Ship-to-Ship combat. The Combat Between Ships process starts with lining up the Spotted non-phasing non-Submarine Naval units. The Phasing player may now choose to place one or more friendly ships to attack each enemy ship. Firing Ships always match up with ships one for one, at the discretion of the firing player. The firing player may gang up and focus on prime targets by assigning their ships to attack one ship. If both sets of ships, both enemy and friendly, have been Spotted, firing is simultaneous. Unspotted ships may fire first and their hits are removed from the battle before they get a chance to fire. Remember, if an Unspotted ship fires, it immediately will become Spotted and can be fired upon.

Each ship of the Phasing player in combat simply rolls a single d6. To inflict a hit on an enemy ship, the die roll result must be equal to or less than the firing ships Combat Factor. Once the Phasing player is done with their firing, the Non-Phasing player can return fire in the same manner. Pretty simple process. If a Naval unit sustains a hit in Naval Combat, it is eliminated. There are ships in the game that can sustain 2 hits before elimination, including the Bismarck for the Germans and the King George V, but those were not used in Scenario One.

Overall, Operation Icarus is a neat wargaming experience as it deals with a very interesting What If scenario, that of the invasion of Iceland by the Germans. The mechanics used in the game are pretty simple yet the game evokes a palpable theme that can be enjoyed in under 2 hours.

In our next Action Point, we will take a closer look at the strategic element of this game and focus on Land movement and the use of the Off-Map Roads Box.

Also, if you are interested, you can check out our unboxing video for the game to get a closer look at the components.