In our first Action Point for Operation Icarus from Tiny Battle Publishing, we discussed Naval Movement and Naval Combat. In this Action Point, we will take a look at the strategic element to this game and focus on movement and the use of the Off-Map Roads Box. 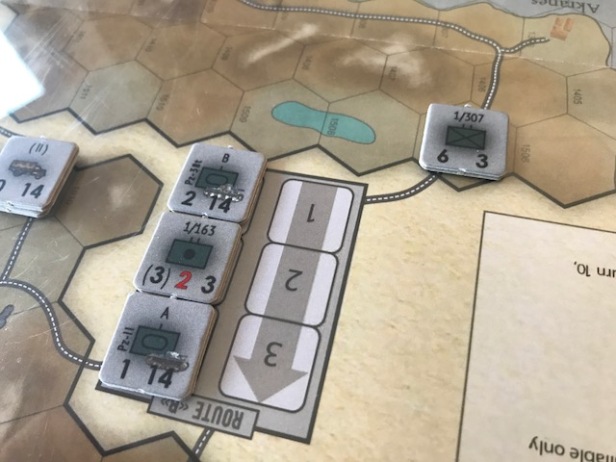 As I mentioned in the first Action Point, as the Germans, my most direct route to invade Iceland was to traverse the Norwegian Sea and make land fall at the port of Akureyri on the north side of Iceland. There were very few Victory Point options on the northern side of Iceland for the scenario, as I could only gain 4VP for occupying the port of Akureyri, but these are pretty much guaranteed points as it is very difficult to move units from the north to the south or vice versa. As you may know, Iceland is a fairly vast island that has population centers on the north and south coasts but not much in the middle as it is covered with poor soil for agriculture and active volcanoes. In the game, this element is taken into account with the method available to the invaders to move units from north to south.

In the middle of the game map sits the Off-Map Roads Boxes. These boxes are used to transit units from north to south or vice versa of the island via the only two roads that traverse that distance. As you look closely at the boxes, you will notice that one is marked Route “A” and the other Route “B” and that each has a route for northerly travel and southerly travel (notice the arrows pointing either up or down). These boxes simply allow players to manage the transit of units between the two map areas. Once any unit of one side enters one of the two roads, the other side may not use that box until the enemy units are out of it. These are small and poor roads after all and if the Germans have a column of Panzers with Trucks carrying soldiers and towing artillery behind them, there isn’t quite room for another column moving in the opposite direction. Plus, the boxes are a no combat zone for the purposes of the game, so thematically, two sides can’t coexist in the boxes.

While one group of units is moving south on the particular road, the owning player (the player whose units are already in the road moving to the south) may place more units on the same road in the boxes behind their front units. These units simply enter the box at the number 1 space and exit at the number 3 space and no more than one unit can enter each numbered space. No stacking on these small mountain pass roads. These units will simply move along this track one space each turn and must continue to move and exit 3 turns later. This is a thematic delaying element as the box simulates the rigors and time it would take to traverse this distance in game turns. If players don’t get their units out on time for whatever reason, either do to changing their mind and turning around or because of still enemy resistance amassing at the end of the track, their opponent will be awarded six VPs, and that is nothing to sneeze at in this game as the VP total for Scenario One was no more than 10 VP.

The enemy can set up an Opposed Exit from the boxes by simply moving their units in position to stop the transiting units. If this is the case, the transiting units have the option of simply entering the map via any legal hex within five hexes of the nominal entry hex. If this is impossible due to other units occupying these hexes, or from violating stacking rules, a combat can ensure at the exit point. This combat will not count toward the 3 round exit rule and your opponent will not be awarded the 6 VP. This can be a very savvy move by the side that is not using the Boxes as they can set up a pretty stiff defense that will be difficult to overcome with only one single unit. This could really cause some back log in the Off-Map Road Boxes and allow the other side to set up their defenses, sabotage ports and airfields or capture and reinforce various Victory Point awarding ports.

Operation Icarus is not the only wargame that I have played that has used some form of an abstracted box system to represent long distances being traveled by troops. One game that did this type of abstraction well was The Battle of Stalingrad from Turning Point Simulations where boxes were used to represent the transit of troops on the Trans-Caucasus Front from Baku to Krasnodarsky and Rostov.

I really enjoyed the interesting thematic elements and abstractions used for Operation Icarus and look forward to getting this game back to the table to play the other two scenarios. In our play of Scenario One: May 1940, my Germans were able to use superior numbers and better units to move down the length of Iceland to capture several key ports including Hvalfjörður and Hafnarfjörður to take away a close victory 7-4 over Alexander’s British troops.