Surprise! I really wasn’t expecting, nor prepared for, this month’s update from GMT Games. I have been pretty busy lately at work with creating our 2018 Budget and really wasn’t paying that much attention. Usually, around the end of the 2nd week of any month, I start to get a tingling in my legs, signaling that the monthly update is nearing. By the start of that 3rd week, it is a full-on tickle as I know the update is imminent. Usually by that Wednesday, my joints are aching and I can feel it in the air as I know that Gene and Rachel are feverishly working on the update and if it ever gets to late Thursday afternoon and it hasn’t hit the World Wide Web, I am downright jubilant with anticipation. But not this month.

This month, I was taken by surprise. In last month’s update, there were 4 new P500 games offered, and I ordered two of them. I also reached out to 3 of the 4 designers of those new games to see if I could get an interview (Bruno Sinigaglio – A Time for Trumpets, Greg Lauback – Death Valley and Mike Nagel – Saint-Omer to Saint Crispin). You see, the monthly update is a great and fertile ground for our blog as we not only are interested in the games, but do our TPA Designer Interviews, and each month, have new designers to reach out to in order to help bring some greater insight into their games to you, our faithful readers. Most of our interviews log over 1,000 views a piece, and some have exceeded 2,000 views (or is that just Beat Darwin reading them over and over and over again…..???). So, as you can see, we really look forward to these monthly updates.

In case you missed the email, here is a link to the October Monthly Update from GMT Games: http://myemail.constantcontact.com/October-19-GMT-Update–New-P500—a-Reprint–Digital–Production–More-.html?soid=1103480314715&aid=2aLY3ZsjEC0

So, now, on to the news from this month:

I have said it before, but World War I has never been a war that I was really that interested in. I think the main reason for my lack of interest was an incorrect, pre-conceived notion I held that the war was nothing more than a large muddy stalemate with little in the way of excitement such as maneuvering, tactics, etc. I thought the war was simply fought in trenches and was characterized as slow and plodding. I have since found out that my perception was not totally accurate. I also experienced a really well done World War I game from GMT Games. You probably have heard about it. Fields of Despair: France 1914-1918 designed by Kurt Keckley.

With that in mind, when I saw this month’s new P500 offering, and saw that it is another game focused on The Great War, I was immediately interested, but not quite yet hooked. 1918/1919: Storm in the West is designed by one of the greats in the industry who has designed such games as Paths of Glory, 1914: Glory’s End/When Eagles Fight (also both focused on World War I) and The Dark Valley. Storm in the West is a remake of a game published in Command Magazine in 1992. The game covers the last 9 months of World War I and includes Ted’s follow up design Plan 1919. The game includes many elements that help to make the game more playable than a traditional continual slogging trench battle as there are tanks, cavalry and air support. The game features, at least for the 1918 scenario, a vast number of highly trained trench warfare specialists in the form of Stosstruppen. The game is marketed as being simple to play but not simplistic and states that it can be played in one session, which to me usually means 4-5 hours or so. I am definitely interested in this game but have not yet pulled the trigger on it as I want to do some further research. The game is a bargain and comes with 1 1/2 counter sheets and a  backprinted 22×34″ map.

More 18xx Games on the Way!

In the monthly update, Gene also shared that GMT will be doing more 18xx games in the future, due in part because of requests from fans on social media and the success of their first 18xx game 1846: The Race for the Midwest, which came out late last year. We did a review on 1846 and really enjoyed the game. GMT has not committed to doing a specific number of 18xx games or even what ones they will choose but they have said that “we’ll be able to add a new 18xx game to our P500 list sometime in the coming two months, with one more to follow on the P500 later in the first quarter of 2018. I can also say that the first game up will be a GMT version reprint of a popular game, like we did with 1846.” So there you have it. At least a couple of upcoming 18xx games with the first being added to the P500 over the next few months. I for one think that this is a great move for GMT as typically those that enjoy 18xx also enjoy wargames, so it appears to be a match made in heaven. With GMT’s commitment to doing such high quality and upgraded deluxe editions of games recently (such as their recent efforts with 1846, Conquest of Paradise and 1960), I am sure this will be a successful venture for them and a good for us gamers.

I just want to take this moment to thank GMT for their undying commitment to us content creators who work hard to share our experience and knowledge of their great games, as well as other fine publishers, with the gaming community. 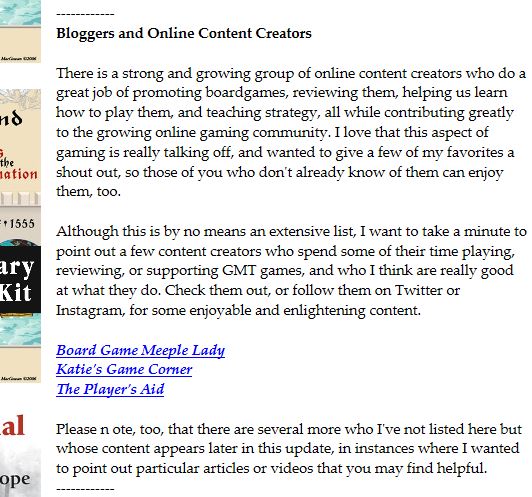 In the monthly update, they gave a shout out to us at The Players’ Aid, as well as a few others in Katie’s Game Corner and the Board Game Meeple Lady. I follow both these fine content creators on social media and enjoy reading their takes on the great GMT Games that we all know and love. I have always said that GMT is a company that gets it. From the way that they communicate, in these monthly updates as well as through social media, the fact that they share content creators posts on their various outlets and that they allow access to their InsideGMT blog, where we have had 3 separate posts appear over the past 2 years. Just a great company that really gets how to interact with us gamers and has definitely created a community that plays games together. Thank you Gene and Rachel! Keep up the good work.

Conclusion and Summary of my P500 Orders

As I always do, I will now wrap this post up with a summary of where my 25 P500 games stand as of October 20th. I routinely check the status of each of my games and also will show the change in orders as compared to the last time I wrote them down on September 22nd.

I ended up ordering no new games this month on the P500, which is a rare thing for me and I would consider that a solid victory for my wallet and budget. It doesn’t mean that the new P500 offering isn’t any good, but it just means that I want to do a little more research before pulling the trigger. I still have my eye on several of the other more recent new offerings (including Golden Gate Park and Red Storm) as well as others that have been on the list for a while (Absolute War! The Attack on Russia 1941-1944). Please consider helping me out by P500’ing one or all of these great games on my list! You will be helping me personally as I will get to play these great games sooner and you also will be helping out GMT Games, who has given us all such great joy with their creations!