Where There Is Discord. What a fascinating game. It’s solitaire only, and you’ll spend a lot of time withstanding the onslaught of Argentine air sorties as their naval assets are a lot less potent. I’ve played a fair few solo games and they usually fall into one of two broad categories: Either withstanding wave after wave of attacks, or sending wave after wave of attacks. WTID is the first one; the Argentine Air Force will launch a large number of sorties, especially during the mid-late game. There’s a lot of strategy that revolves around ship classes and how you place those in the Task Force formation. On top of that you’ll be stretching your own Sea Harriers to the limit as you organize Combat Air Patrols (CAPs) or scramble them if you have early warning. 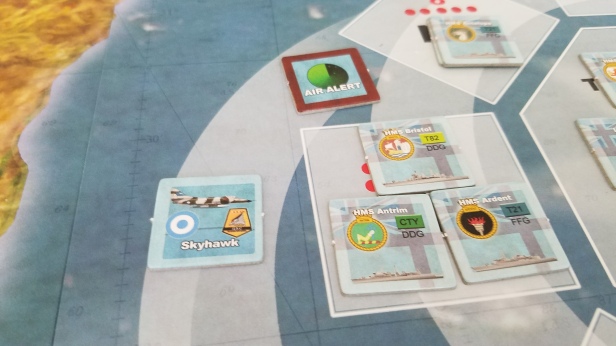 Trying to manage your resources (the Harriers) is a really fun part of the game, as they are very precious and irreplaceable. Do you gamble that your surface vessels can shoot down the enemy and leave the harriers on deck, or scramble them to fend off the bogies? The enemy Aircraft aren’t necessarily that potent but a 1-in-8 or 1-in-10 chance that they sink a vessel is a hell of a risk if you don’t shoot them down or force them to abort.

Where There is Discord is covers a conflict that is modern enough where many of my peers fathers fought. It’s a conflict that I grew up and it was fresh in everyone’s minds. Playing this game really was a personal experience as I delved into documentaries and articles online to help learn more about what was going on. I enjoy modern era games because they help me to stay grounded as a wargamer. Many of these men and women that served are still around and perform everyday functions in society. WTID helped me to appreciate more the experiences that other’s have had and to understand (on a theoretical level at least) some of the stresses, sacrifices and heroism of those involved. Other modern games do this too, Things like Labyrinth: The War on Terror, or the expansion The Awakening. I really enjoy this aspect of wargaming because I feel like it does more than give me a good time, but helps to broaden my mind, make me more sympathetic at times and provides some level of education as well. So here’s to many more wargames in the future!