Cool Mini or Not are one of the most interesting board game publishers to pop up in recent years. Cool Mini or Not started off as a website for showcasing miniature paint jobs and custom sculpts on which users would vote if they were cool or not. Sounds simple enough, right? At some point with the massive collection of miniature’s pictured they took a step into the production world and started to make their own minis and stuck them in board games that have since become some of the most successful games in the hobby in recent years.

Zombicide Black Plague is the most recent iteration of the Zombicide series, a collection of fairly light zombie themed coop games. There’s the modern versions, which launched the series, and now Black Plague (and Green Horde that just ended a Kickstarter campaign), which moved the Zombicide world into a fantasy setting. I picked it up for a couple of reasons, which I’ll go into later, but here’s a look at the retail version of Z:BP. 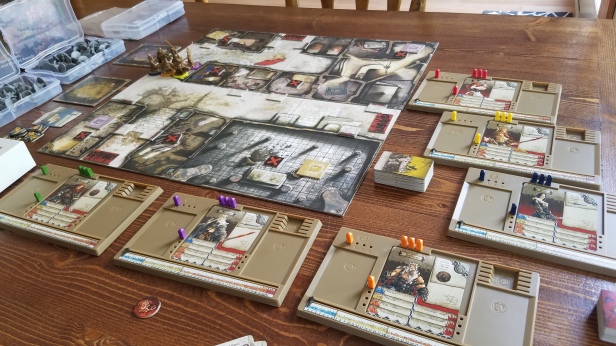 There’s a lot of zombie games out there. Too many some would say, and whilst my collection isn’t chock full of them, I’ve played a couple and can see the enjoyment in the zombie theme. There’s nothing like playing a lighthearted, trashy game where you wade through the guts of Zombies as you cut them down by rank and file without remorse. Conversely, games like Dead of Winter give you a much grittier and intense feel, and shift the focus away from the zombies themselves to an extent. Zombicide Black Plague falls into the first category though, and this is not a bad thing. 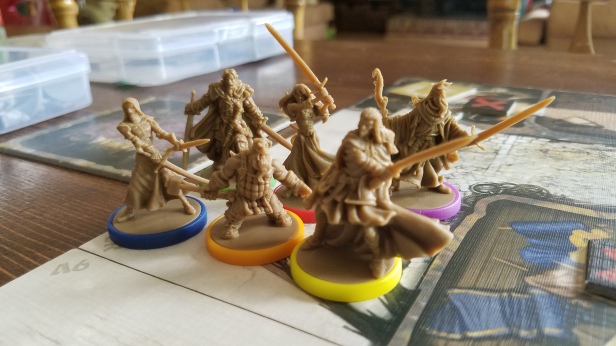 The players control anywhere from 4-6 survivors, most often 6, and are trying to survive the undead onslaught whilst achieving a given set of objectives per the scenario. I purchased this game because it said that it was from 1-6 players and the solo aspect was a sweetener in the deal. My immediate observation as far as solitaire goes is that the game isn’t scaled in any way. If you play this with one person, that one person controls all six characters. If you play with any other number you just divide up the survivors between the players. So, just understand that playing the game alone means you have to manage everyone and everything, which can get a bit overwhelming. You don’t get to be a stealthy lone wolf in a fantasy zombie infected world. You get to micro manage the entire heroes department. I was a little disappointed at this because the table creep is real in this game and I was hoping that soloing this game could reduce the footprint, but that’s not the case. 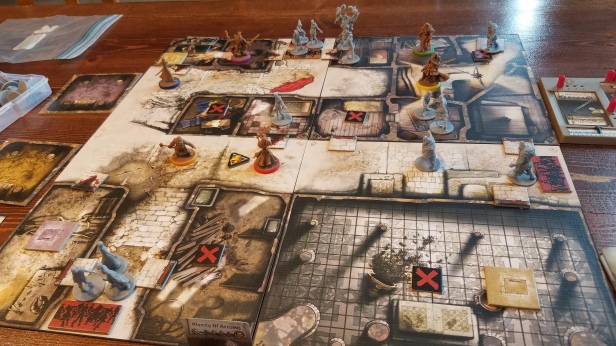 Zombicide Black Plague is mechanically very simple which is exactly what I want in a zombie game. I’m here to just relax, and smash things and not really think too hard about it. If I wanted to melt my brain, I’d play Labyrinth: The War on Terror. Black Plague uses a really simple dice rolling mechanic to score hits on zombies. The number of dice you roll varies with the weapons that you use and any special abilities you might have. Each hit you score on a die kills one zombie figure. The crux here is that there is a targeting priority. What happens is that you swing your sword in a square for example, and you do X amount of hits and remove X amount of zombies. But Zombies have to be killed before fatties, so you can’t snipe the big guy! You have to instead wade through the blood and guts of the regular walkers before you can remove the scary mean guys or the Necromancer. So as trashy (read: awesome) as the game is, it actually can provide you with some really interesting tactical situations to try and game your way out of before getting overwhelmed. 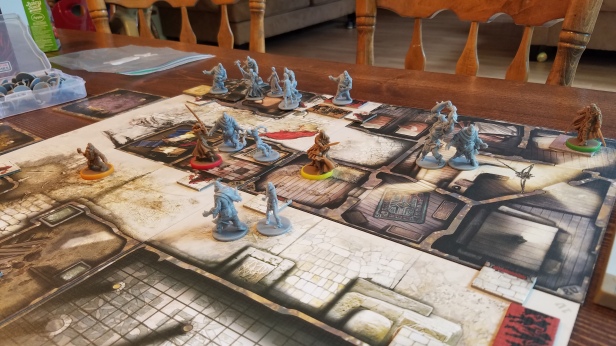 All that being said, my main gripe with the game is that it is really, really hard. Normally I’m all in favour of that. Co-ops had better be hard, otherwise why are we wasting our time? But Zombicide Black Plague puts you so far on the back foot with the awful starting weapons that it’s really difficult to make any real progress in the game. I’ve played now four times, twice solo and with three or four others. Every new game you will spend the first third of the game trying to accrue any kind of good weapons to defend yourselves with. I have found though that by the time you can stand up to the zombies, it’s too late. You’re overwhelmed simply from a numbers stand point. 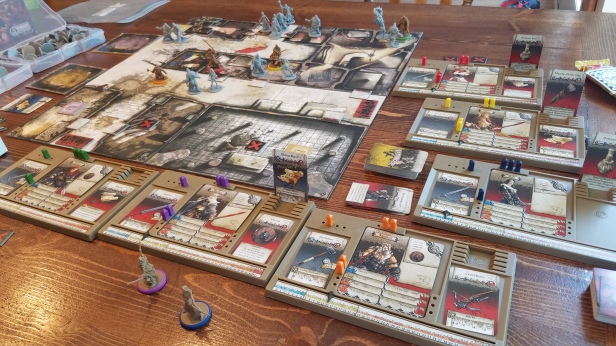 The key here is that when zombies spawn, if there are no more zombie figures of that type to place, then each zombie figure on the board of that type gets an extra activation. As you can imagine, as the pool of zombies dries up, you get swamped really, really quickly.

Should I Get This Game?

I originally got this because the first Zombicide (the modern version) apparently had some silly targeting priority rules. You had to target friendly characters before zombies if using a ranged attack into a hex. I felt like that would have been a fun killer, and in Black Plague they changed it where only missed ranged attacks would target friendlies first, so there is a risk, but you didn’t just murder your friends to try and escape. That rule came into effect more often than I thought it would, so I’m glad I made that choice. 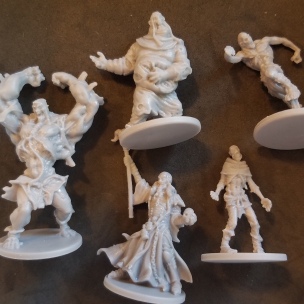 What I’m not as glad about is what I mentioned earlier, that the survivors start extremely under-powered in my opinion. Again, in the original game you start in a safe room and get to chose a starting weapon that packs a punch, but the starting weapons in Black Plague are just a disaster. It’s a simple house rule, as are the ranged attack rules discussed above, but you’d like to see these all polished up by now, with the game being a few iterations old.

The last thing that drew me to Black Plague was the fantasy theme. I enjoy a good, trashy zombie game, but the fantasy theme on this one meant that I could more readily reuse the miniatures for RPGs. For the price of the game (retail copy on amazon is ~$75), you not only get a full fledged board game, but I now have a bunch of really well sculpted miniatures and a huge zombie horde as well that can be used in other settings. There’s a lot of opinions about miniatures in games recently but I personally enjoy them because I’m one of those people that gets to double down with the minis and utilize them outside of the game. That gets me the biggest bang for my buck.

I wont pretend the game is easy, but it is lighthearted fun. At some point you just give up and get swamped and die swinging away, which has it’s merits. I enjoy this for the low stakes fun it provides with a group. A few house rules here or there and the fun factor gets ramped right up. This will stay in my collection, but I did cancel my Green Horde kickstarter backing because I could not justify the expense for more of the same. Zombicide isn’t $120 (minimum) good, even with all those exclusive minis.