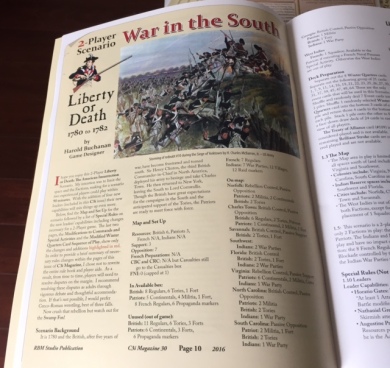 We were finally able to play the War in the South Scenario for Liberty or Death: The American Insurrection, which is contained in C3i Magazine Nr 30. The scenario is designed as a true 2 player only game that sees the players controlling the Patriots and the British with the Indians and French playing only a very minor support role in the game. The scenario is aptly named as it focuses only on the Southern colonies including Virginia, North Carolina, South Carolina and Georgia. The scenario lasts three rounds and can be played in about 2 1/2 hours. We enjoyed our playthrough immensely and really had a good time with the scenario. One of the optional rules that you will want to use is the 2 player Initiative Track that was designed by Brian Train for his COIN Series game Colonial Twilight. Here is a picture of that track for your use:

If you are interested, you can also check out our unboxing video for C3i Magazine Nr 30 as well as our Action Point from our first play, which is where we create fake headlines from our battles and share various game elements through them. Action Point 1

13 thoughts on “Video Review: War in the South Scenario for Liberty or Death from C3i Magazine Nr 30 by RBM Studio”