We have all played Clue at one point or another through out our gaming life.  I like the premise of Clue, there is hidden information that you need to find out before others but lets be honest, you can only play Clue a certain amount of times.  Deduction games are hit and miss for me, they are either really good or really bad.  My wife loves deduction games due to the puzzle nature involved, so I am always looking for good ones.  They just make your brain work in a different way.  This week I will look at the games that I feel do deduction right.  Deduction in the sense of someone has some or all of the information and you have to figure it out by eliminating other information.  So, here are the Best 3 Games with…Deduction! 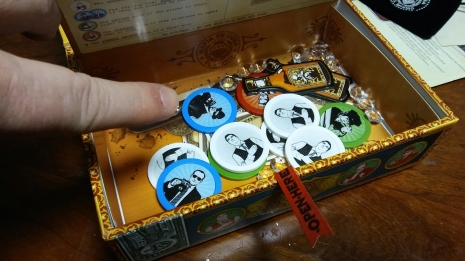 We recently bought Mafia de Cuba, designed by Phillipe des Pallieres and Loic Lamy, because my wife wanted it.  I had known about it and after I described it to her, she said I want that.  The game did not disappoint when we got it out during Christmas.  During the game one person plays as the Godfather.  He starts the round with a box full of diamonds and identity chips.  He passes the box to the person on the left.  Each person, when they get the box, takes either diamonds or an identity, FBI Agent, Driver or Henchman.  When all have had a chance to take something, the questions start flying.  The Godfather wants to find all the people who took his diamonds.  All players during the questionnaire can lie their rear end off.  If you are the Agent you want him to pick you, you automatically win.  If you are the henchmen, you want the Godfather to win.  It is so much harder than you think it would be…..I don’t know how many times we chose the Agent on the very first guess.  It is a great party game that gets everyone involved. 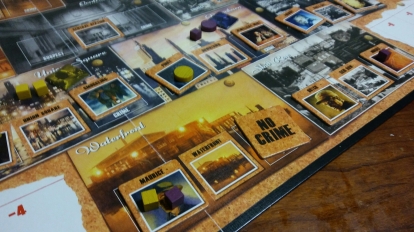 P.I. is the best Euro style game that is closest to Clue, in my opinion.  When looking for games for my wife I wanted to be as close to Clue as I could but with out the paperwork.  I never did like having a piece of paper to check things off.  I wanted that experience with just my thoughts and a board…..P.I. does a great job of that.  During the game each detective is working on a different case.  I have the case of the player to my left.  The player to my right has my case.  During your turn you take cards or use investigators to track down a suspect, location and a crime.  Cubes and discs are placed on the board in response to your guesses and you have to deduct the information by just those things.  If you are able to get your case solved before the others you will get more points.  You play three rounds with a new case for each round and the player with the most points wins.  Did I also mention that you lose points for guessing wrong?  Martin Wallace does a great job of creating that feel of Clue without the annoying paperwork and random dice rolling. 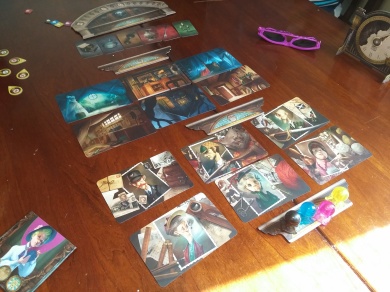 The theme in Mysterium is almost identical to Clue.  There is a murderer who killed someone at a location with a weapon and you have to figure it out….only this time you are working as a team.  One person plays a ghost who has been killed and knows who the killer is, and the other players play as psychics who commune with the ghost in dreams.  This is similar to P.I. where each player has their own case to solve but in the end there will only be one killer, location and weapon.  The ghost will pass out dream cards to each psychic to help them along the way…..without talking at all.  It is so much fun, trying to interpret what the ghost is trying to tell you.  All the while trying to help others determine their own dreams.  Oleksandr Nevskiy and Oleg Sidorenko created a wonderful design that similar to P.I. gives you a great deduction game with out the paperwork.  The other great thing about Mysterium is almost any age can play.  My four year old even loves to play.

One thought on “Best 3 Games with…Deduction!”