Fortress Europa is a game that’s been around for an age. Originally released in 1978, the game was a follow up to the wildly successful The Russian Campaign and whilst a lot of people have played it, it is widely considered second fiddle. Part of that is the nature of the conflict, historically speaking. Allies land, build up force, break out and then traipse across France and head to the Rhine. The German player in this one will be conducting delaying actions, organized retreats and opportunistic counter attacks. In game terms that just isn’t as dynamic as something like North Africa with the ebbs and flows of control and power, or even East Front games from Barbarossa to Bagration. I never played the original, I mean, it was released a decade before I was even born, so this was my first interaction with it and I will say there is a lot of polarizing chatter about this one.

I could be easy to please, or just inexperienced, but Grant and I had a blast playing this for a day. It’s a two player game, that’s very easy to solo (there’s like sevel hidden units), uses two maps and has a classic wargame feel to it. From what I can tell almost all of the game is exactly the same as the last edition from decades ago, and the DSE just brings the production quality forward. The counters are clean, clear and a larger size than the originals, which for me is the biggest improvement. Lacking any real experience with older titles the tiny small red and blue counters are just not as functional as modern ones.

The play aids in this one are plentiful and well put together, and I felt the rule book was easy enough to read through. I found that a surprise as I had read on BGG that the rulebook was effectively a straight PDF scan-to-text with basically no changes or editing. I’m sure that’s not true, only because I typically struggle reading older rulebooks for some reason. Maybe I’m just a moron, but I feel like a lot of older titles read like a technical manual that somehow isn’t explicit enough when it comes to the technical aspects. I guess that’s also part of why I don’t look up comments or reviews of games before I play them, that way I don’t have preconceived ideas and prejudices to taint my view. 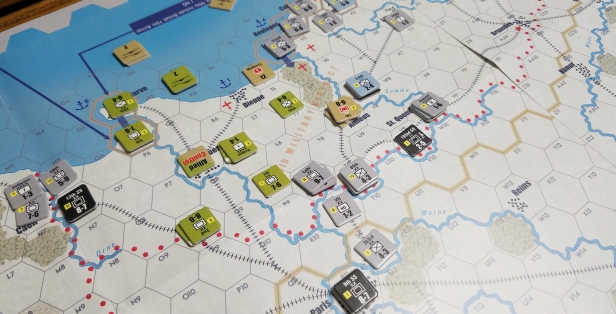 Anyways, Fortress Europa is a mini sand-box style game of the Liberation of France in 1944. I say sand-box because you can stage the Invasions from basically anywhere, each coming with it’s own set up instructions and constraints. Sure, doing it at Normandy gives you the capacity to land the most forces, but sometimes those Champagne landings in the south look really appealing, especially after your brutal initial landing rolls. And they will be brutal. Invasions are not easy. I think we re-did the beach landings two or three times because of terrible rolls by Grant leaving the landing forces in tatters.

But that’s what this game is about. Land forces, establish a beach head, land the mulberries and try to breakout. Liberate Paris and race to the German border. When the storms hit and wreck your mulberries though it can wreak havoc with your supply and command. The mulberries and ports you control determine how many steps of units you can have and use in France, so a wily counter attack from the Wehrmacht can really screw up the Allies. That’s something I enjoyed. This wasn’t a linear simulation. It was a game. There was space for both players to conduct operations and make some meaningful choices and not just run, run, delay by the Germans, although they will have to do that at some point.

Combat is odds based on a CRT, nothing out of the ordinary. The decision space within your combats is, however, enhanced by things like committed air cover. Prior to each round you’ll conduct an Air War mini game where the Allies and Germans commit to various air missions. With the Luftwaffe severely outnumbered the Germans will be prioritizing things like fending off close air ground support, or defending bridges from being bombed, etc. They will never be able to stop all of it, but you can force the Allies into some tight decisions about which combat out of the three key ones this turn gets the Air Cover modifier, for example.

I did enjoy things like the hidden set-up of like seven German units, you could use that to bait the Allies to land on certain beaches, or try and double bluff leaving places vulnerable and doubling up others when they try to outsmart you by not going where they think you’ve hidden them. I’m always a sucker for games where I get to play the player as well as the game, and these little droplets of that were just enough to make some great moments in the game.

So, this is the real question. It is also a question I’m probably not qualified to answer because I’ve never played the earlier editions, nor have I played any of her sister games. So take whatever you read here with a pinch of salt. There’s plenty of games covering this topic, and this is definitely one of them. Grant and myself had a fun time playing this one, there’s a lot of classic feeling to this game, because in reality the mechanical updates are very minor. We play a lot games that aren’t your standard hex and counter, or are trying really hard to be new and innovative. So it’s actually refreshing to play something that hasn’t changed in forty years.

The chrome in this one gives you an interesting side show, but in turn affects certain modifiers in different combats, or other movement capabilities amongst other things. So all these extras serve to actually enhance the games experience, rather than just being tagged on for historicity’s sake. The Aircraft mission chart was an enjoyable sideshow to the main maps, a quick couple of minutes each round to try and curb what Allied air forces could do. The German’s will never be able to stop all the allied air missions, but can prioritize the halting of carpet bombing, or close air support, or destruction of bridges, etc.

This was an enjoyable game, that has a lot of options. If you like exploring alternate histories then there’s plenty of different ways to liberate France. Long two-mappers are tough for me to play again and again purely from a space stand point. I have no problem with committing multiple sessions to one game, but I don’t have a practical space away from my family to leave something set up like this, so until I get my basement space fixed up this one will wait patiently for us to revisit. If you’ve got this kind of time and space then this game is easy to get into and gives you some interesting options to recreate D-Day in your own fashion.

2 thoughts on ““They fight to end conquest” – A Review of Fortress Europa: Designer Signature Edition from Compass Games”