During the summer of 2017, we were contacted by Kevin Bertram who was working on a card driven game focused on the Barbary Coast and the American intervention in that region called The Shores of Tripoli. The game looked very interesting and Kevin agreed at that time to do an interview with us for the blog and do a series of Event Card Spoiler posts that provide an inside look at the game mechanics as well as the history behind the game and the cards which are based on historical events.

Keep in mind that the pictures of cards shown, as well as the text on them, are not yet finalized and are for playtest purposes only at this point. 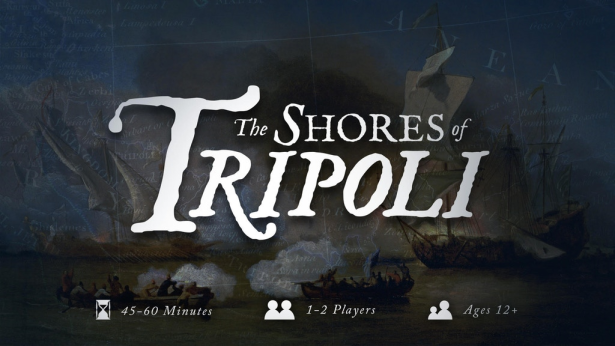 In the previous Event Card Spoilers post, we looked at the two cards that the United States can play to win – Assault on Tripoli and the Treaty of Peace and Amity. The Tripolitans have very different victory conditions. They win by making the price in blood and treasure too high for the Americans to pay. This can happen in one of three ways:

The least likely – but most satisfying – way to win as Tripoli is by sinking four American frigates. And to have a chance, Tripoli will need some luck on two cards.

The first card is The Philadelphia Runs Aground. I will go into further detail about the Philadelphia in the next Card Spoiler post, but for now let’s take a look at the card. If there is at least one American frigate in the naval patrol zone outside Tripoli, the Tripolitan player can play this card. Two-thirds of the time it will result in a sunk frigate.  A roll of 1-2 is mostly useless. A roll of 3-4 sinks an American frigate. A roll of 5-6 (the historical result) allows Tripoli to capture an American frigate. It not only counts as a sunk frigate for winning the game, but Tripoli also gets to add a frigate to its fleet. The card can only be used once and is removed from the game after play. 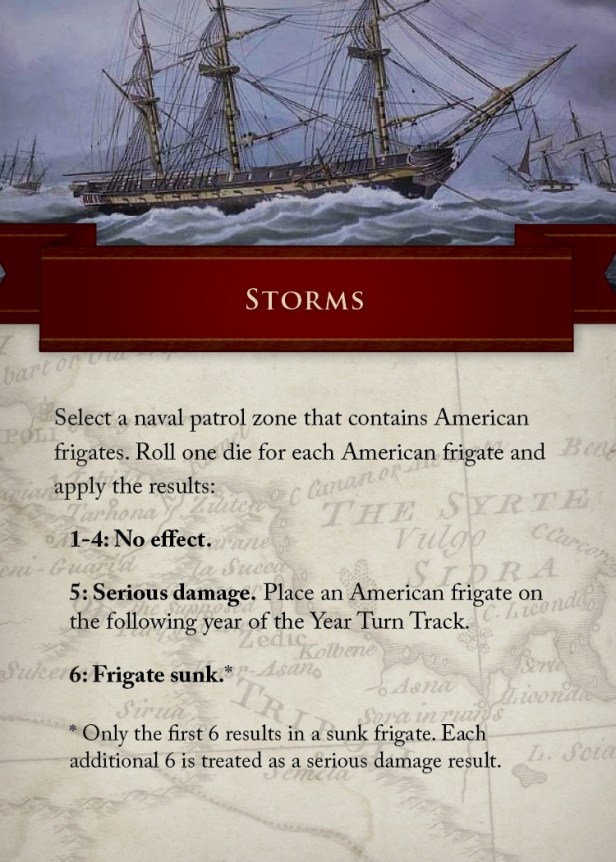 The second card is Storms. Storms is not removed from the deck when it is played, so the Tripolitan player can play it sometime between 1801-1804, and then get it back again in either 1805 or 1806.  With Storms, the Tripolitan player rolls one die for EACH frigate in a particular naval patrol zone. If played with three or four frigates in a patrol zone, there is an approximately fifty-fifty chance of sinking a frigate. (Yes, I am simplifying the math here and it is important to note that on each play of Storms only one frigate can be sunk – otherwise the card is too powerful.)

This means there is a one in six chance that Tripoli can sink three frigates through card play – 2/3 times 1/2 times 1/2 – leaving Tripoli only needing to sink one frigate in combat to win the game.

The downside to playing Storms too early is that it is what inhibits the Americans from bunching up their fleet outside Tripoli. The American is afraid to have six or seven frigates there – it is just too risky with Storms still out there. Storms is almost more powerful as a threat – unless a few American frigates are already on the bottom of the Med.

In the next Event Card Spoiler post, we will discuss what Horatio Lord Nelson pronounced as “the most bold and daring act of the age.”

Thanks Kevin for the insight into these historical event cards and the explanation of how they work. Kevin is planning to provide us with several more examples of Event Cards along with the history of the conflict.

If you missed the first set of spoilers, you can read them here:

Treaty of Peace and Amity/Assault on Tripoli

If you want more information on The Shores of Tripoli, please check out our interview with Kevin about the design process and mechanics.

Also, the game is still on Kickstarter and you can check out the campaign at the following link: https://www.kickstarter.com/projects/fortcircle/the-shores-of-tripoli?ref=bmvc7d