If you know me at all you know that I’m always trolling Facebook and Twitter looking at games. A few months ago I came across a very interesting post on a possible early design for a COIN Series inspired multi-faction treatment of the Northern Ireland Conflict from a budding designer named Hugh O’Donnell. 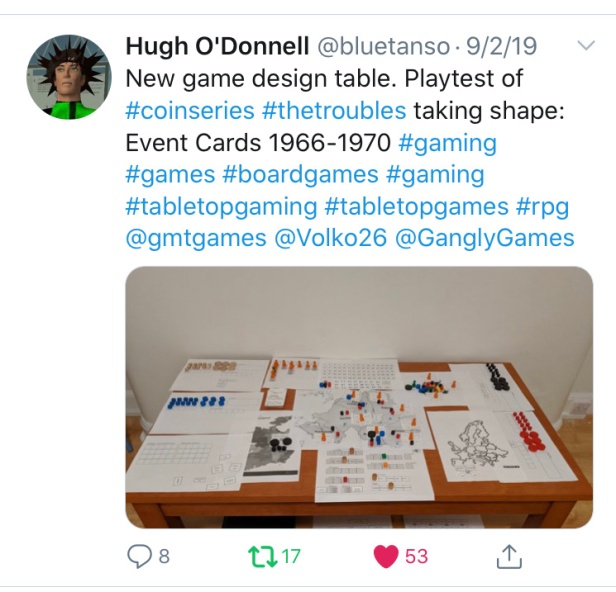 I reached out to Hugh to see if he would be interested in writing a few guest features for our blog on his design to get the word out and share his vision. He was interested and decided to do three separate posts. Here is the first of those posts, which will appear on our blog over the next month:

On the 8th of November 1987 a crowd gathered in Enniskillen, Northern Ireland at a monument for the war dead, for a memorial service on Remembrance Day. Eleven people died that day: the Provisional IRA had planted a bomb. 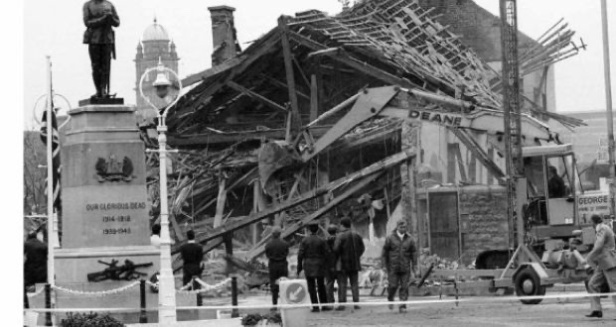 Marie Wilson, a twenty-year-old girl, and her father, Gordon had been standing near the monument. They were buried under bricks. Gordon Wilson recalls:

“We were both thrown forward, rubble and stones and whatever in and around and over us and under us. I was aware of a pain in my right shoulder. I shouted to Marie was she all right and she said yes, she found my hand and said, “Is that your hand, dad?” Now remember we were under six foot of rubble. I said “Are you all right?” and she said yes, but she was shouting in between. Three or four times I asked her, and she always said yes, she was all right. When I asked her the fifth time, “Are you all right, Marie?” she said, “Daddy, I love you very much.” Those were the last words she spoke to me. She still held my hand quite firmly and I kept shouting at her, “Marie, are you all right?” but there wasn’t a reply.

I have lost my daughter, and we shall miss her. But I bear no ill will. I bear no grudge. Dirty sort of talk is not going to bring her back to life.

Marie’s father told the BBC that he forgave her killers and added: “I shall pray for those people tonight and every night.”

The Provisional IRA was forced by its own horrified supporters to apologise, and the incident has come to be seen as a turning point in The Troubles. 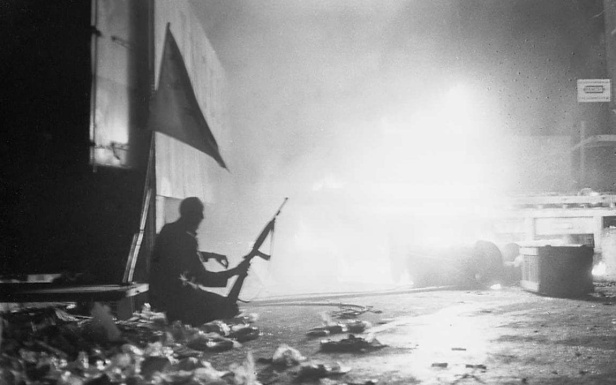 So where does one start when approaching the period of the civil war and political unrest known as The Troubles?

“[S]omeone may well ask. “Why recall such things?

It is the writer’s duty to tell the terrible truth, and it is a reader’s civic duty to learn this truth. To turn away, to close one’s eyes and walk past is to insult the memory of those who have perished. Only those who have learned the whole truth can ever understand…” (Grossman, V. p165-66, The Hell of Treblinka in The Road: Short Fiction and Essays, Maclehose Press, 2011).

As a Secondary English Teacher I am interested in the cognitive benefits that learning through narrative brings, and RPGs and boardgames can provide vivid and fluid narratives within which participants have a particular sense of agency that is not afforded to the more passive reader or viewer.

My aim is to approach this 30-year harrowing narrative context from a perspective of what players can learn from immersing themselves in this particularly sensitive narrative; the tragic events and bloody situations; the actions undertaken by those responsible as peace-keepers, paramilitaries or politicians.

This is unlike any work of non-fiction: not only are the participants being educated in a historical context, they are immersing themselves within a ‘world’ constrained by the mechanics of a situation that will challenge their own moral perspectives.

I would never have considered this design if I wasn’t completely confident that I had the integrity and humility required for such an undertaking.

And in doing so, and as with any narrative, one must consider each and every word – its connotation; its order of appearance; its political, religious, and emotive weight. Should I use Game to describe this – or even Serious Game? Or Playful Learning? How about Simulation?

And the term Player. Should we use Participant instead? Is Faction too depersonalised?

This ‘project’ will undoubtedly provide that juncture where we do (again) ask, What is a game? What is a simulation? And force us to consider the moral and ethical implications of unfolding that map, dispensing those pawns, and shuffling that Event Card deck.

It is my aim that The Troubles will offer that pivotal moment where we can – at last – point to the serious, and academic endeavour not only in the participation of its world, but also in its design. The process involved in COIN-series game creation is – as Brian Train put it – a form of journalism; so it is with participating in its play.

Last May, and after interacting with Volko Ruhnke, co-designer of A Distant Plain, Jason Carr, Trevor Bender and Brian Train, I suggested that The Troubles narrative would fit well with their COIN-series: it perfectly aligns with General Sir Frank Edward Kitson’s ‘asymetric warfare’ philosophy that he brought to Northern Ireland, and the subject of academic investigation later published as ‘Low Intensity Operations: Subversion, Insurgency and Peacekeeping’; and being situated in the West Coast of Scotland, we have been acutely aware of the situation in Northern Ireland, which – unfortunately – manifest in Sectarianism on and off the Scottish Football terraces, in our towns and on our streets.

And in keeping with having experts in the field to support ongoing game design, Dr John O’Neill (former researcher and lecturer in Archaeology in Queens University Belfast and University College Dublin) has been invaluable in providing me with the necessary historical background to supplement my background readings and continued research; and I continue to be supported through my affiliations with Edinburgh University, where I obtained a Masters Degree in Digital Education, which was subsequently published and featured in the Times Educational Supplement. [Note: I will be forever grateful to Dr. Hamish Macleod who not only supported me as a tutor on this programme, but he shared my work during the university’s Digitial Education Programme’s European ‘tour’ in 2015.]

So, if the COIN-series games utilise mechanics and resources analogous to the real-world events that they are trying to mimic, and if it employs a historical context based upon real-world events which also affect the developing and final outcomes of the game – does this suggest that it is a Simulation, an academic study?

Participants have the opportunity to evaluate opportunities and situations involving the resources available at that time, but which may have existed under different circumstances, and perhaps saved the countless lives that were lost, and brought the war to an earlier and amicable conclusion; not the protracted, bloody war that it became. 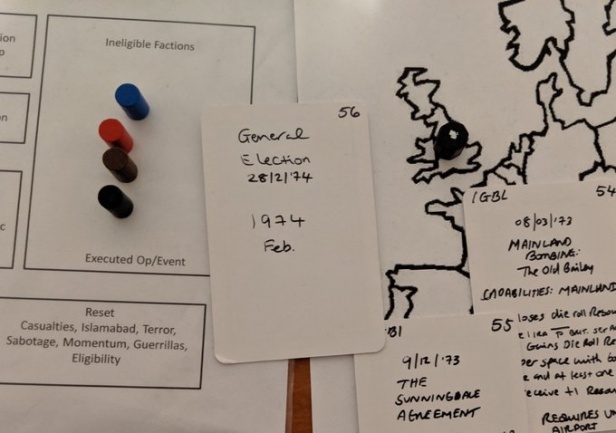 The Troubles shall aim to be a teaching tool; its Participants will be able to analyse, to make decisions, to evaluate – and to empathise. So, yes: this aims to be a simulation.

And to those who lost their lives directly and indirectly to the violence enacted throughout this period of the 20th Century, we return to Vasily Grossman:

“Great is the power of true humanity. Humanity does not die until man dies. And when we see a brief but terrifying period of history, a period during which beasts triumph over human beings, the man being killed by the beast retains to his last breath his strength of spirirt, clarity of thought and passionate love. And the beast that triumphantly kills the man remains a beast [ultimately there will be] victory of good over evil, of light over darkness, of the forces of progress over the forces of reaction”. (Grossman, V. p152, The Hell of Treblinka in The Road: Short Fiction and Essays, Maclehose Press, 2011). 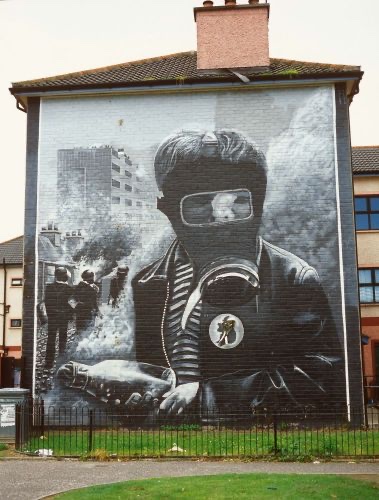 In Part 2/3 in this series, I will look at the question of Four Factions vs. Six Factions – Avoiding a War of Attrition. I will discuss the need to augment the typical 4-Faction model inherent in A Distant Plain. 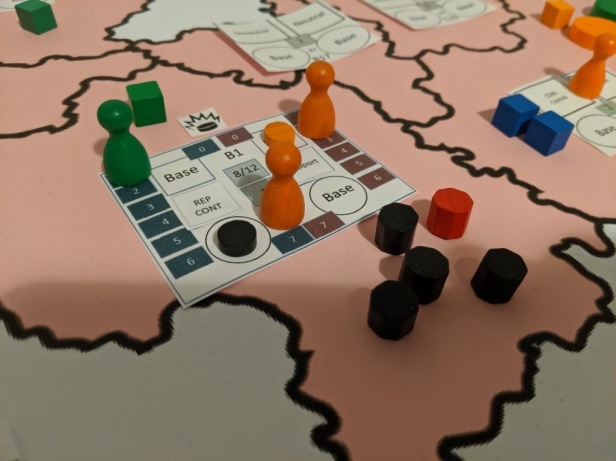 A very big thank you to Hugh for his time in sharing these provocative words and to helping us all to think about these things in a different context. I look forward to seeing what he writes in the next few parts in this series but also look forward to seeing more in his design and ultimately one day getting an opportunity to play, or rather experience and learn about The Troubles through the lens of the COIN Series.

19 thoughts on “Guest Blog Post: The Troubles Part 1 – An Early Look at a COIN Series Inspired Multi-Faction Treatment of the Northern Ireland Conflict by Hugh O’Donnell”