In Brave Little Belgium, you assume the role of either the Germans or the Entente (Belgians, French, and British) at the start of World War I. This introductory wargame is designed to be quick-playing and uses a point to point map and a Chit Pull mechanism, one of our very favorite mechanics, to simulate the beginning of World War I on the Western Front. The game takes place over the period of time between August 4 and August 27, 1914 and each turn represents three days. 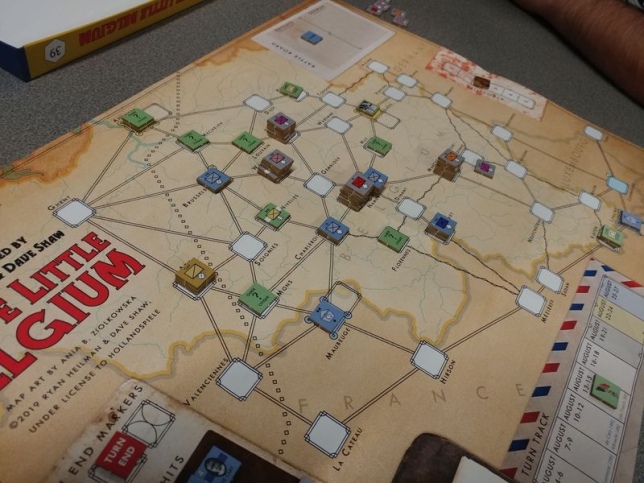 The goal for the Germans is to quickly smash the Belgian defenders before they can be reinforced by the French and British, destroy the forts at Liege and Namur and occupy a city on the other side of the Victory Line with an Infantry unit. The Entente simply need to stop the Germans from accomplishing their goal by slowing their advance down. As I said, a fairly straightforward wargame with some of our favorite mechanics.

In this series of Action Points we will examine the Chit Pull Activation system, take a look at an example of Combat and discuss some of the other interesting aspects like Atrocities and the valiant and undermanned Garde Civique.

At the start of each turn comes the Chit Pull Phase. The Players place all the available chits, and there are three types, into an opaque cup. Players simply reach in and pull out one chit without looking in the cup. These chits are then resolved completely before the next chit is pulled.

The three types of chits are as follows:

Event Chits – may cause a special Event to happen.

Turn End Chits – lead to the end of the round once all three have been drawn.

If an Event Chit is drawn players will place the chit into the Pulled Chits Box. These chits don’t activate immediately. At any time prior to the Movement step of an Army Activation (see below for more details on this step) or before resolution of Combat, the player whose event it is may take the chit from the Pulled Chits Box and choose to resolve the Event. The Events can only be used once and are flipped over to the Event Used side to denote they aren’t available after use.

There are several different Events for each side. The German Events are as follows:

Zeppelin – for only one Combat, all German Units add +1 to their die rolls.

Movement is very important for the Germans, both in making sure you plan your routes to avoid difficult terrain (that costs 2 Movement points) and to avoid encounters with enemy Units that will stop your Movement such as the Garde Civique or Forts that you don’t need to attack. You must maximize your Movement as much as possible and keep moving. Speed is the key!

Big Bertha – For one Siege Combat, the Germans automatically deal one Hit to a Fort regardless of the dice roll results. Also if a Fort is Activated by the Entente, the Germans can return fire if they use the Event where normally they cannot. As the German player you have to be efficient with Combats and make them as short as possible. If you roll poorly, and also don’t use your Events well, you will see sieges last 2-3 rounds and lead to your defeat as you are bogged down.

The Entente Events are as follows:

Sabotage – during a German Activation, all German Units subtract -1 from their printed Movement Factor.

Forced March – for all moving Units this Activation, all Entente Units add +1 to their Movement Factor.

If an Army’s Activation Chit is drawn, then any Units belonging to that Army can be Activated. The Activation is very simple and starts with Units moving and then ends with Combat if they are in the same Box. Movement is all resolved first followed by all Combats in the order chosen by the activating player. The real key to this sequence is you have to make all Movement decisions and then proceed to Combat. No move first and see how that fight turns out before you move your next Units. This is key to the design and makes the need for proper spatial planning important. You will end up with lots of log jams if Combat doesn’t go well for you and you haven’t planned well.

If a Turn End Chit is drawn it is simply placed in the 1st of the three Turn End Boxes. Once all three Turn End Chits are drawn, the Turn will end. As you draw one, the German player will only blink and not yet begin worrying. Once the 2nd Chit is drawn though they may begin perspiring and wringing their hands. You see if they haven’t drawn their Event Chits or their Army’s Activation Chits, the progress of their round can be severely hampered. Once that 3rd Chit is drawn, the round will end. Quick rounds are good for the Entente player because if the German didn’t get to Activate their Army’s they didn’t get a chance to advance or defeat the Entente defenders.

But as the German player, don’t despair yet. There is hope. You have the option of Activating those armies that didn’t Activate this turn. You also can then use any unused Event Chits that were remaining unused in the Pulled Chit Box. There is a risk though and this is where the press your luck element comes into play. The German player announces which inactivated armies will Activate but before carrying out the Activation, they will roll a d6 for each such forced activation.

On a roll of 4 or higher the Army will be able to Activate but will end up perpetrating an Atrocity on the local civilian population. This is an abstracted element that has its place in history but is the price of these forced Activations. The German player has an Atrocity Track that is numbered from 1-5. Each roll they fail and commit an Atrocity, the marker will be advanced up the track. If the marker ever reaches 5 on the track the game will end immediately in an Entente victory. So as you can see, these forced Activations can be costly but are important to try and to manage. Without forcing the Activations the German will have no hope of reaching their goal by game’s end.

I hope you got a good understanding of the Chit Pull System and can see that while simple the design is very solid and requires proper planning, a little bit of luck and some intestinal fortitude to make the choice to push your luck when necessary as the German player.

In Action Point 2, we will take a look at a few different types of Combat, including Combat in City Boxes, Combat in Forts and Siege Combat.