The Great War (Centenary Edition) from PSC Games is a lite wargame that relies on cards and dice to decide the outcome of various scenarios during World War I. The game uses the same system found in Commands and Colors designed by Richard Borg that allows players to activate units located in specific sections of the battlefield with cards. The units activated can perform various actions such as move and fight, and the great thing about the cards is they sometimes break the rules and give your units extra abilities.

There are 58 different Command Cards in the deck and each player will be given a specific number of cards to start each game based on the scenario. Among these 58 cards there are 40 Section Cards and 18 Tactics Cards. We will talk about each of these types a bit later in the post.

At the start of each turn, players will alternate playing a Command Card from their hand. These cards are used to order a player’s units to move, battle or do something special. The card that is played will dictate which section or sections of the battlefield that orders can be executed, including either the Left, Center or Right section. These sections are denoted by dotted lines on the game board that divide each section from the section or sections adjacent. 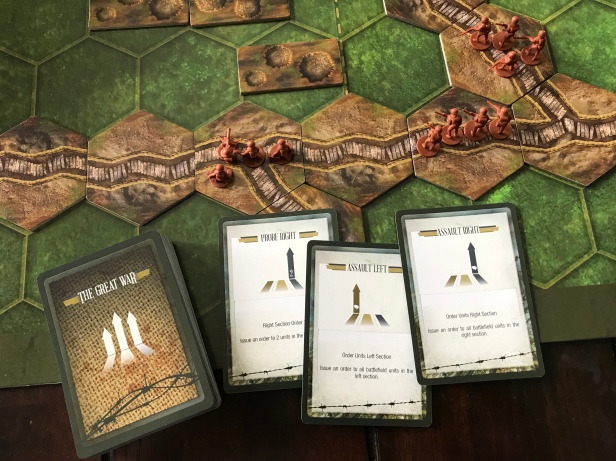 These type of cards are your bread and butter and will be used to order a set number of units in the section or a combination of sections of the battlefield, highlighted by an arrow and a number. There are 10 cards that focus on the Left, 12 for the Center, 10 for the Right and then 8 cards that effect multiple sections of the battlefield at once. Here is a closeup look at a Section Command Card: 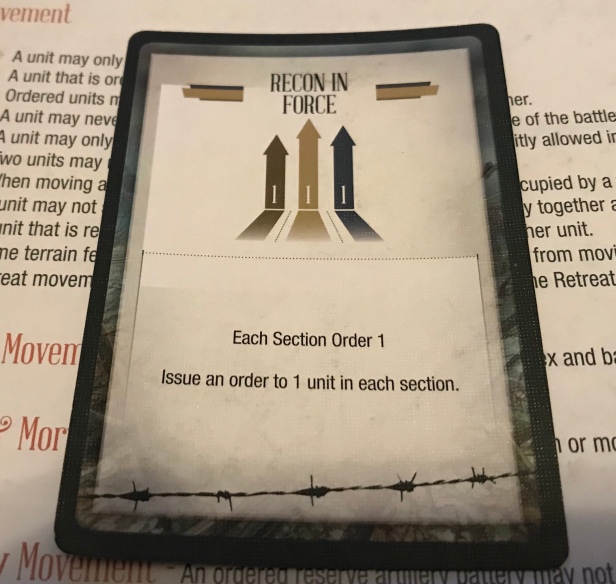 This card is named Recon in Force and allows the player to issue one order to one unit in each of the three battlefield sections, including the Left, Center and Right. The player will refer to the table that depicts the unit movement allowance and range and will activate that unit who can move and even fire with the single activation.

As the picture above shows, here are examples of cards that focus only on one section of the battlefield. The key to the use of Command Cards is making sure you always have at least one card for each section to maximize your options to move and attack or defend each section. Of course, the luck of the draw can make it really difficult and I have played many games with no cards being drawn for one section.

A Tactic Command Card orders unit’s across the battlefield in any section and may allow the ordered units to move and battle in ways that are not normally allowed by the rules. These cards are the real power and n the game and the shrewd play of them will more often than not make the difference in the outcome. 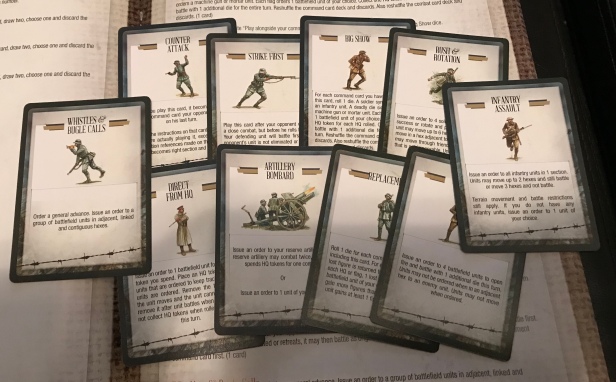 There are 10 different Tactic Command Cards and as mentioned earlier they allow you to take actions that aren’t normally allowed by the rules. Here are a couple examples.

Storm of Fire allows you to activate four different units to open fire and roll one extra battle dice in the attack. Normally a unit will only roll a few dice but adding one to their attacks can be a huge advantage. The principle is simple. Roll more dice more often than your opponent and you will win. This is one of the most powerful of the Tactics Command Cards.

The Command Cards are one of the elements I really like about The Great War, and frankly is what makes this game chaotic and unpredictable and keeps the game lite. There is strategy required in the game but good strategy goes out the window when you just can’t seem to draw the card you really need.

In Action Point 2, we will take a look at the different types of units in the game and their abilities, which are represented by really cool 15mm plastic models.

If you are interested, you can check out our unboxing video to get a good look at the components and our video review to see what we think of the game play.