Armageddon War is a game that is just that. A game about a near-future fictional end-times war. I’ll be honest – not a theme I had any interest in. From the title, you can see it’s a platoon level game which is a scale I’m rapidly becoming more fond of though. Platoon level games give you the tactical feel whilst stripping away the nitty-gritty, thousands of rules and exceptions to said rules. By tactical feel I mean small combat elements moving too and from terrain/cover making shooting lanes, using range, laying smoke, firing mortars, etc. But again you’re not bogged down in micromanaging support weapons, explosives, limited ammunition and all the extras you find in tactical games that keep you constantly flipping back and forth in a rules tome.

Set in the Middle East and surrounding region, Armageddon War is an excuse to simulate combat with modern arms, and some cool futuristic tech, in a what-if kind of scenario. A lot of the names and places will be familiar to anyone paying attention to current foreign affairs, but the game comes with it’s own lore. Certain political moves have been made and religious ideologies are also a motivating factor between belligerents. All of this culminates in a fast paced, rolling war game.

We buy wargames because we like fighting, right?! Well, Armageddon War has plenty of that. The game has a couple of unique systems, the most obvious being the custom dice rolling for combat resolution. In the box you’ll find a bunch of black, red and green dice with a varied number of hits and armour symbols on them. You roll the dice to see how effective your fire attack is. You only roll some of the dice however. You start with a pool of the black dice. There’s a series of combat modifiers from range, terrain, unit status, special abilities and many more. These modifiers are totaled and the net modifer adjusts the dice being rolled. A positive net modifier will upgrade that many black dice to the more potent red dice. A negative net modifier will downgrade that many black dice to the very weak green dice. 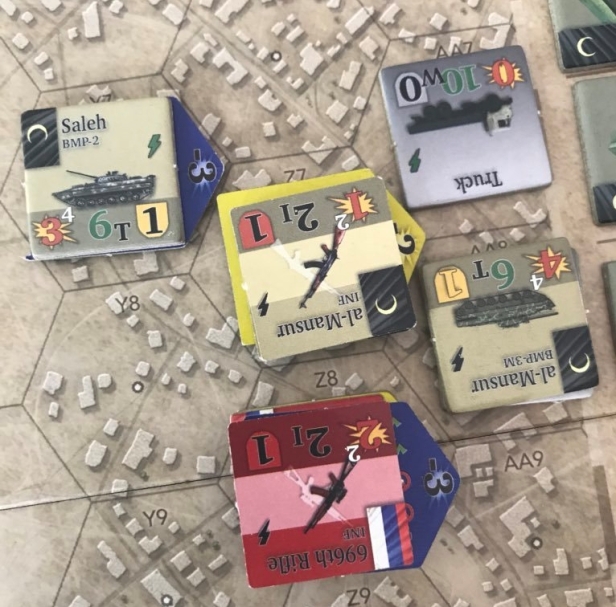 Then, you roll away! I’m going to be honest up front. That system was hard as hell to remember. In principle, it’s a very simple and streamlined system. But it’s a very different style of mechanism than you’d find in traditional wargames. In that way I had to reshape my thoughts to make sure I was calculating it all properly. After the first few rounds however the combat felt fluid and very simple as you started to memorize what did and didn’t give bonuses.

Now, looking through the pictures in this review, you may have seen the coloured “flags” protruding from underneath counters. These flags are just like normal shaken/exhausted counters you see in many games, except the shape of them means they’re easily visible and you don’t need to rifle through stacks to find out what’s what. Seriously. This is an ingenious little detail that makes the game very user friendly. In other games you might have status markers with different sizes, but those just make the stacks more unwieldy. The new shape is something I hope to see bleed into other productions.

The last thing I wanted to talk about, with regards to combat, is also the most important. The activation/initiative system. Turn taking in combat games can often be the most important aspect. Some games are simply I-Go-You-Go. Others use some other random method. But most games have a beginning phase, actions/activations phase, and then clean up and admin. You then move to the next round and do it all over again. Not so with Armageddon War. This game uses a chit pull activation system, which is nothing new. What is new is that there are no traditional static game rounds; only a fixed number of activations. A scenario might be 30 activations long for example. The game uses a sort of rolling activation system. Once you pull the last chit from the bag and place it on the activation track you then pull all the ones behind it on the track and put them back into the bag.

There’s no clean up and end of round procedures. Any rallying or whatever you might expect to do in such a phase is done at the beginning of each units activation. You just keep on rolling. There’s a couple of special “command chits” that you can use when one of your chits is drawn – it replaces that chit. This command chit activates which ever platoon you want (including the one just drawn), but also puts the just-drawn chit back into the bag. This enables you to get an extra activation with one formation or put what might be a “wasted activation” on a unit further away from the fray.

Either way, this rolling activation means the combat feels like one single battle. There’s no arbitrary rounds, enabling everyone to activate, everyone will activate but the state of the battle field is always fluid and in flux. Units that are in bad shape might not get the chance to reactivate, or they might get a fortuitous draw and save themselves. Either way, I’ve never played a game where a battle felt quite as dynamic as this one. The action felt constant and unrelenting. After a scenario gets done you breath a little easier now that the fury of combat is over. Seriously, this game succeeds at giving you a continuous battle feeling and is easily one of the best aspects of this game. It provides tension, realism, and chaos. I’m desperate to see the activation/status system in Armageddon War put into other themes and settings!

Sh-should I get this game?

Straight up, this game isn’t for everyone. It’s a little on the pricey side, and it’s one of those topics that can at times leave a little bit a of bad taste in your mouth. Grant noted during our play that he felt a bit off trying to get ISIS units to win and perform attacks on US troops. For some, it can be a bit too close to home, and that’s more than understandable. For those that are interested, or can overlook that, the game system is fascinating. The dice resolution is fun, and keeps the game from becoming a slogging simulation but rather remains an entertaining battle game.

But honestly this game should be played by everyone if only for the activation/status/damage system. It’s ingenious, clean, and really easy to manage with those “flagged” counters. Sometimes stacks can get a little unwieldy, but that’s rarer than not. Masking the rounds of play into a continuum makes the game engine incredibly dynamic and one that has limitless possibilities with regards to historical application.

Armageddon War far exceeded my expectations. Admittedly, my expectations were fairly low, as the theme wasn’t something I had a lot of interest in and the dice chucking system seemed gimmicky when first reading about it. But in actuality the game system is extremely fun! There were some key goals the designer Greg Porter tried to achieve in this game. One of those goals was to make the game fun to play. And it was. He also wanted to make the entire game feel like one continuous battle, instead of alternating rounds of combat. At this the game also succeeds resoundingly. It was an entirely refreshing experience and I’m desperate to see the activation/damage system implemented into other periods with pitched battles.

I haven’t played the solo yet, but will do so at some point, but there are one or two scenarios in the game that are already solitaire (you play against some US guard drone robots in a military complex). As always with Flying Pig Games the production quality is very good with huge and beautiful counters and maps, so if you’re interested you can always order from their website at https://flyingpiggames.com/t/armageddon-war.

It’s not the cheapest game in the world, so consult your SO’s before buying (you’ve been warned).

If you are interested, you can check out our unboxing video to get a better look at what’s in the huge and heavy box.

11 thoughts on ““…So mighty an earthquake, and so great” – A Review of Armageddon War: Platoon Level Combat in The End War from Flying Pig Games”