In this Action Point, we will take a look at one of the very interesting optional rules contained in the Close Encounters expansion covering Research and Industrial Centers and will also examine Ship Experience and Military Academies. One of the great things about the Close Encounters expansion is that each new addition is optional and can be added in when players are ready for a new experience or challenge. 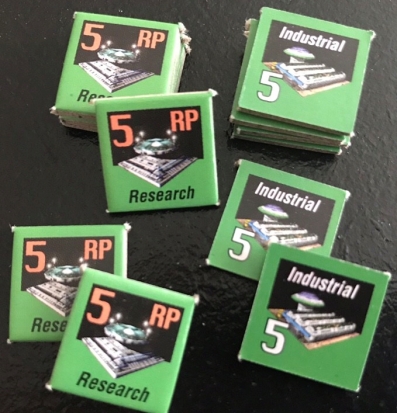 Bookkeeping. This is one of the complaints that I see from those that don’t enjoy Space Empires 4X. I am not an accountant but I do enjoy me some crunchy numbers. Some would say that this doesn’t belong in a Sci-Fi wargame but I say Bah! Every wargame I have ever played has used some form of a Combat Results Table or CRT that involves the calculation of odds for attacks. The CRT also usually has multiple Die Roll Modifiers that must also be included when you finally find the correct column. These DRMs come from items such as terrain modifiers, distance, type of units firing, etc.

Now, Space Empires 4X requires this as well but also requires the tracking of your economy and various technology upgrades on a sheet that is provided with the game. The Close Encounters expansion has a new sheet that takes into account all of the new units, new technologies as well as these new concepts such as Research and Industrial Centers. These new elements require a little additional bookkeeping and will require that players add some time to their anticipated play time. So why would someone want to add a new element to an already long game? Well, it simply adds another level of strategic planning and decision making to the game. And the best part about this expansion is that it is modular and you can simply add what you like and keep out what you don’t.

What are Research and Industrial Centers? They are simply additional improvements that players can purchase and place on a planet with a colony in order to gain a benefit. They do, however, provide a lot of additional buying power and because of this will change the rules slightly. The biggest change is that players can only spend 15 CPs per turn on researching technology and they don’t actually buy the tech, as in the base game, but convert those funds to 15 RPs to be used on researching technologies. This is done because Research Centers will create Research Points that can be spent to buy those same technologies and it will make for escalation that is too quick to be supported by the game’s parameters. You also have to use the 20 CP Homeworlds if you are playing with RCs and ICs.

RCs and ICs each will cost 3 CP to purchase and you can only ever have one of these improvements on any given colony. Once placed, an RC or Research Center will generate 5 RPs per turn, which can only be used to research technologies. Players can carry over up to 30 RPs per turn so you can build up quite a machine for research. An IC or Industrial Center will generate 5 CP each turn after placement and these CP can be used as normal to purchase ships, units and other infrastructure, such as MS Pipeline. The trick to these new options are that you have to decide how to use them. Remember, in your home system, you only have 8 Colonizable Planets and you have to be choosy about how you use them. You will have to make sure to invest in RCs as you can no longer spend your normally generated CPs to research indiscriminately. I like to use about 5 of those planets for RCs, along with my Homeworld, which allows me to generate 30 RPs per turn along with an additional 15 RPs being able to be converted from CPs produced. This will give you 45 RPs to spend which will be plenty in the end.

CPs are also very important to the game as they allow players to build bigger and more powerful military units, especially now that Titans cost 32 CPs and you know that everyone needs a Death Star! But, you can’t simply use all of your Colonizable Planets for Industrial Centers. There must be a good balance of the use between these two items.

Players will have to keep this extra information on their new sheets that are provided with the expansion so it will add some time to the bookkeeping aspect, but I still think this is a good addition to the game that offers some interesting choices. Is it absolutely necessary to enjoying the game? No, but it does add some additional need for planning. And, I do enjoy planning and economy building!

It makes perfect sense to me that you would reward players that have been aggressive with their Extermination protocol for Space Empires 4X and it also makes perfect sense that you would reward victory. Ship Experience is now available and has 5 different levels, including Green, Skilled, Veteran, Elite and Legendary. Experience is actually tracked by a group of ships but not individually. Groups of ships that have fought and destroyed enemy ships will gain new experience. This extra bit of bookkeeping is tracked on the Ship Tracking Sheet provided in the expansion. The limiting factor with experience is that you cannot combine two groups of ships of the same type with differing levels of experience and gain the advantage of your highest experience. If combining groups with differing levels, the entire group will revert to the lowest level of experience in the new combined group. For example, if you have combined a group of Destroyers from two different fleets, one that is Veteran and one that is Elite, the entire group of Destroyers will gain the benefits of the lower of the two experience levels or Veteran in this example.

Here is a closer look at the same picture of the Battle Board. 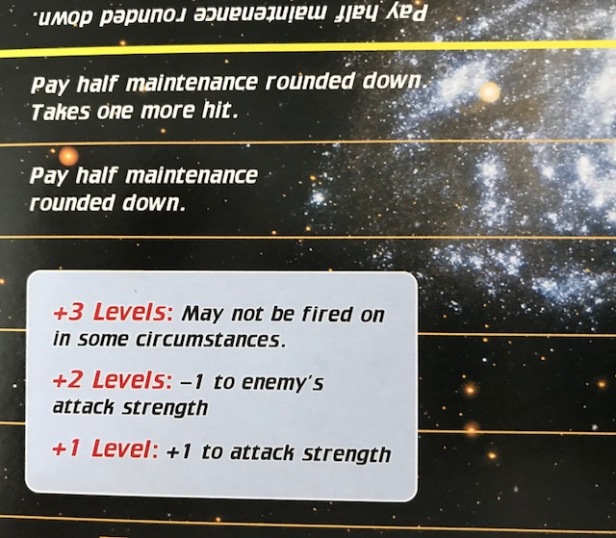 How is experience gained from Combat? The answer is that it is just a die roll. Each group can gain experience whenever they destroy a ship in combat. For each ship destroyed by that group a die will be rolled after they are done firing. If the die roll is less than or equal to twice the Hull Size of the destroyed ship, then the group that destroyed the ship gains a level of experience. For example, if a ship that was destroyed has a Hull Size of 2, then a die roll of 1-4 will result in experience being gained.

This Combat Experience Die roll can be modified under two circumstances. One, if the destroyed ship has a larger Hull Size than the firing ship, the die roll will be modified by -1. Two, if the firing ships have researched Military Academy Level 2, they will gain a -1 DRM. These DRM are cumulative.

This experience is gained immediately during battle. So, if my ships destroy a ship during their fire turn, I will make the Combat Experience Die roll and can gain the next level of experience that will take effect in later turns of this same ongoing combat. This can be a big advantage and must be used wisely to gain the maximum benefit.

I hope that you have enjoyed our look at the Close Encounters expansion for Space Empires 4X over the past few weeks. If you missed them, we did a few other Action Points on the expansion. Action Point 1 covered the new Empire Advantage and Alien Technology Decks and Action Point 2 covered the many new ships and ground units that are included.