Recently, we have been doing a lot of content covering Space Empires 4X from GMT Games. Why you might ask? Well, we think the game is simply fantastic and want to share it with you so you can experience it.

Close Encounters is the first expansion to Space Empires 4X and adds some really interesting elements to the base game. The expansion now adds ship boarding engagements and planetary invasions using different types of ground troops. There are also the addition of cards called the Empire Advantage Deck which adds in unique racial abilities that players can use to bolster their empires. One thing that I really like about this expansion is that it is modular and players can choose to use only the parts that they are interested in using. And believe me, there are lots of choices!

In this Action Point, we will take a look at the Empire Advantage Deck as well as the Alien Technology Deck to give you an idea of the types of abilities that your empires can now take advantage of.

The Empire Advantage Deck is a vehicle to introduce one of my favorite elements of the Close Encounters Expansion, which is variable player powers that can drastically change what players might focus on during the game. There are 25 of these cards and they provide special powers to the player that controls them during the game. These powers might be in regards to attack strengths when fighting certain types of ships, the cost of certain upgrades and technology improvements might be lessened or their ship movements might start enhanced. These cards are dealt to each player with a few alternative methods and these cards are kept secret from the other players until the condition is met that will require them to be revealed.

Here are pictures of a few examples of the cards. In looking at these three, I don’t see any game breaking abilities that will imbalance anything. In the case of Ancient Race, their ability is a start of game ability that can give them a very fast start, allowing them to inject CPs into researching technologies and in getting a head start in their production. I have found in our plays that the player that gets a fast start on their economy, either because they find a lot of planets close to their home planet or have the ability to collect a lot of minerals, will have a slight advantage at the beginning but this will even out over time.

The Industrious Race card is also fairly good as it allows the player to be able to colonize asteroids as if they are a Barren Planet once they have researched Terraforming. Remember in the 25 home system chits, there are 2 asteroids which will bring the Colonizable Planets in a player’s home system to 11 (8 Colonizable Planets, 1 Barren Planet and 2 asteroids). This additional 2 colonies can create 10 CPs (12 if they are connected with an MS Pipeline) and can also give a great advantage to a player. Not an immediate advantage but one they can work toward by investing in the Terraforming technology.

A few more examples of Empire Advantage Cards from the expansion. With Traders, another economic based card, the player can obtain an additional CP per planet that is connected with an MS Pipeline. That could equate to a very significant advantage as you could get an additional 16 CP after colonizing each of the 8 Colonizable Planets in your home system. This will take time and investment as you build up your MS Pipeline (remember these merchant ship counters cost 3 CP to build and have to be connected back to your home planet) but can be a significant benefit. With an additional 8 CP, a player can purchase another Destroyer.

Expert Tacticians is also a very good card that deals with combat. Normally, players only get a +1 advantage for a greater Fleet Size if they have 2 times the number of ships of their opponent. With this card, you only need have +1 more ship to get the +1 and your opponent must then have 3 times the number of your ships to gain an advantage. This could be a great benefit as that +1 bonus is added to the power of each ship in the fleet.

So far, the cards that I showed you are pretty balanced, and while they offer a very good ability for their owner, the ability is generally no more powerful than the others. I now want to show my only concern with the Empire Advantage Cards. If you know anything about the game, there is a lot of book keeping which is generally made up of tracking the Technology Improvements that you have made as you buy new ships. Once a Technology is researched and purchased, the player doesn’t automatically get that ability for their existing ships that are out in space. Those ships must spend a round located at a Ship Yard facility and the player must pay a cost for those upgrades. Typically, to gain all of the Tech Upgrades to an existing ship that have been purchased since it was bought, you must pay 2 times the Hull Size of that Ship. For example, if a Cruiser (CA) is upgraded with Attack 2 (from its current Attack 1) and adds Move 2 (from its current Move 1), the cost will be 2 times the Hull Size. Cruisers Hull Size is 2 so it would cost 4 CP. If a player has the Nano-Technology card, their ships may instantly upgrade to the newest Technology for free regardless of location. Let me rephrase that, you upgrade ships for FREE no mater where they are! Wow, that is a very powerful ability. Not only because it saves a lot of CP, but because you can upgrade your ships that are deep in enemy territory before they move into combat with other ships. In my humble opinion, this card is broken! (Alexander will laugh as he trashed me with it). Over the course of a game, it will easily save a player well over 100 CP and will also provide additional modifiers on Attack and Defense rolls regularly.

Compare that overpowered card with the other card shown, Star Wolves. Star Wolves gives a player’s ships, limited to their Scout Ships, Destroyers and Fighters, a +1 attack strength against ships with a Hull Size of 2 or greater. Also, their Destroyers cost 1 less CP, 8 vs. 9. Don’t get me wrong, this card is nice but when paired up against the Nano-Technology card, it just doesn’t compare.

Overall, I really like the addition of the Empire Advantage cards and would never play the game without them. They just add some really great options and choices for players to customize their race and try new strategies. I would however make sure that you house rule the selection method. I prefer to have each player draw 3 cards to choose one from as it gives you more chances of finding a card that is really good versus just alright. 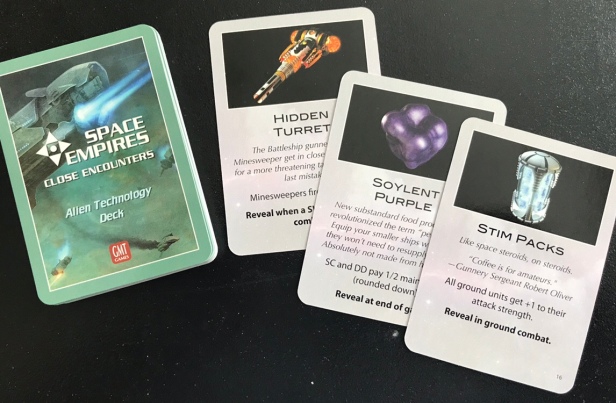 There are 30 Alien Technology cards in the game. Before the start of the game, this deck will be shuffled and placed face down next the game board. Before shuffling, the players should remove any cards from the deck that only modify rules not being used in the game. The Alien Technology cards are an interesting addition to the expansion as they give some really great incentive to players to be aggressive and try to get out into Deep Space to colonize planets there. When a Barren Planet in the Deep Space portion of the map is initially colonized or captured, the player may draw 2 of these Alien Technology cards. The drawing player will keep the cards secret, retaining one card and discarding the other card face down. If playing with non-player aliens, this card is free. But if not playing with non-player aliens, then the player must pay 10 CP in the next Economic Phase if he chooses to keep the card.

So what kind of technology is found on these cards? Well, the simple answer is lots of awesomeness! Most of the tech is combat related, but that is fine with me. Once again, the attraction in this part of the expansion is choice and options. These Alien Technology cards really can change how you play the game once you have discovered them and make the choice to add them to your empire by paying the 10 CP.

The Anti-Matter Warhead is a simple upgrade that gives all of your Destroyers a +1 attack strength. Imagine that? All of your DDs now have a based attack strength of 5. Also, don’t forget that you could increase their attack strength to a 6 if you have purchased the Attack 1 Technology. Not an overpowered ability but something that might cause you to start building more DDs.

The Photon Bomb is also pretty cool. If you have Fighters, all of a sudden they get an additional attack strength of +1 when firing on a ship with a Hull Size greater than 1. A nice ability that you could focus on and really do some damage with.

Minesweeper Jammer is one of those “take that” cards. You have invested heavily in Mines and your opponent knows you have. When you find this technology, all of a sudden your enemy’s Mine Sweepers are obsolete. The unfortunate part of this card is that once revealed after your first battle, they will then start to invest heavily in upgrading their Mine Sweeper technology but this has caused them to invest in something they weren’t planning on and gives you a few rounds to do something to them. A great distraction!

Improved Crew’s Quarters is a fantastic card as it makes your Carriers cost 3 CPs less. I tend to buy a lot of Carriers and really like using Fighters so this tech can be a great benefit if found early enough to be used. If you are already into the Dreadnoughts and Titans, Carriers become less useful as you must match their firepower with the big guns of your own.

Mobile Analysis Bay and the Advanced Comm Array are also very good cards that allow you to bend the rules of the game. That is what I like about the Alien Technology Deck; it allows you to play Space Empires 4X in a different way with different parameters! And different is very good in my book as it makes a game infinitely replayable.

I hope that you enjoyed this look at just one part of the Close Encounters Expansion for Space Empires 4X. The expansion contains so much goodness and this is just one part. In our next Action Point, we will take a look at some of the new units available to players. Talk about escalation. I feel like the game went from a knife fight to a nuclear holocaust, and I am totally ok with that.