Last Battle: Ie Shima, 1945 is a pretty unambiguous name. Revolution Games put out this title a couple of years ago, which I picked up in 2017. After nearly a year of owning it, I finally got it to the table and found a really nice game, at a great price point. Ie Shima was, as you might imagine, the last major ground assault in the Pacific and this game gives a taste of what troops and commanders faced in a relatively approachable and fast playing package.

Ie Shima uses an area impulse system, which we experienced for the first time in Patton’s Vanguard a few weeks ago – also from Revolution Games. In this iteration the board is very small, the island is divided into only 16 regions and as such the game is fast paced, tense, bloody, and does not over stay it’s welcome.

Touted as a two player game I’d actually only recommend this one as a solitaire experience. I say that because the fighting is very one sided. If your opponent wants to sit there for 90 minutes taking a savage beating and maybe doing two or three key counter attacks then by all means go for it. But for me I found the solo experience much more rewarding than I would have with a live opponent.

You control seven regiments from the 77th Infantry Division that stormed the Island over the course of four days. Each regiment has four battalions which are best kept together, as doing so provides a +1 combat modifier, representing regimental cohesion and strength. The majority of the game involves the American player moving the stacks around the Island attempting to wipe out the Japanese defenders, but more importantly capturing the key strategic areas that have printed VP values on them. Typically these are mountainous/urban areas which are much easier for the Japanese to defend and they’ll quickly retreat and fortify these areas, awaiting the inevitable onslaught. 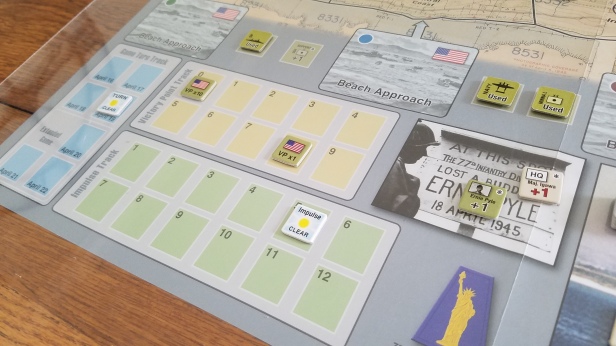 Each game turn (four turns in the normal game) is broken up into a series of impulses. Each impulse provides an opportunity for both players to act, the Japanese always being first. During the American half of the impulse a check is made against the first die roll of the impulse. So, if the American player decides to attack and rolls 2d6 the combat is resolved as normal. However, those 2d6 rolled are also compared to the current impulse number. If the number rolled is lower than the current impulse the daylight phase ends, signaling the end of the turn. If the die roll is equal to or greater than, then the turn continues and the next impulse will be played out. This is called the sunset roll.

This does a few things in terms of game play. It rewards you for using all of your bombardments in a turn. There’s a few naval, aircraft and artillery counters that can be used as a single attack action, usually with relatively favorable odds, that do not put your troops at risk (bombardment impulses do not incur the sunset check). It also means that you need to press the attack as the Americans, and the game rewards aggressive play early in an impulse. Having a turn end early plays into the hands of the Japanese who are simply trying to delay the inevitable and inflict as many American casualties as possible.

On initial set up it’s immediately obvious that the Americans have overwhelming force and numbers. I was a little dismayed that there’s basically only two Japanese units defending a beach against twelve incoming allied units. But the Japanese can pull out some very significant Pillboxes and the reality is that they were historically brushed aside with minimal losses, at least comparatively speaking. The real struggles began in the ascent of the moutain and the surrounding urban terrain and caves, where Japanese fighters, and civilian conscripts, hid around every corner and defended tooth and nail with improvised weapons. 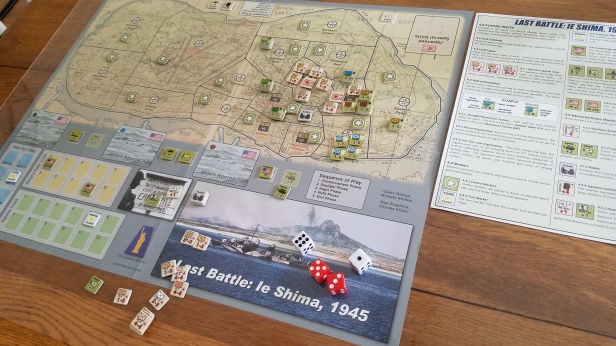 I imagine almost every single game of Ie Shima ends up with the Japanese forces surrounded on the mountain clinging on for dear life. The battle will never be won for them, but history may be re-written in the sense that an even more stubborn defense might last a few days extra. From the outset, the American’s have a significant combat bonus, from battalion cohesion (+1), air support (+1) and the ability to muster far larger combat stacks than the enemy.  Later on they can also bring in artillery (+1) and tank (+2) support in certain situations. It’s pretty clear the overwhelming odds are in their favour, but it’s still very risky at times to engage heavy defenses.

As units move in to areas to attack a lead unit it chosen to spear head the operation. Their combat factor is used as a base modifier, and they will also typically suffer losses – even in a victorious battle, from attrition. If attacks are ever repulsed by the enemy the effects on the attacker can be deadly as every unit in the attacking force suffers a step loss. The Japanese will want to mount strong defensive efforts as a result, and stacking everything in the mountains, surrounded by pillboxes can seem a very tempting offer. This however allows the Americans to bring the full force of their military might to bear though, so they’ll need to do some (read, very few) strategic counter attacks to keep the Americans off balance and in sub-optimal positions 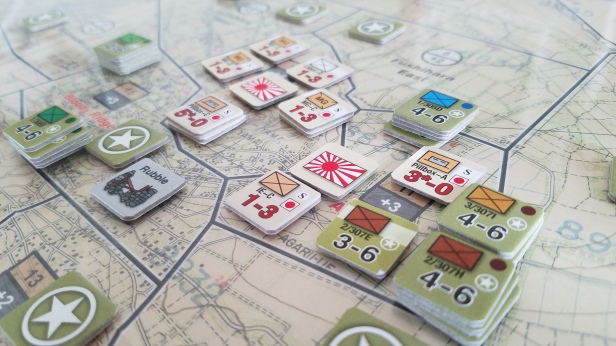 The game provides a few benefits for the Japanese, outside of steep terrain modifiers and those strong pillboxes. They have a single bombardment counter that isn’t particularly effective, but they can roll a dice when attacking to try and activate an improvised Satchel Charge bonus that adds a +4 which can help to bring the pain during surprise night time attacks. But really the combat is typically lopsided. Rolling 2d6 for combat helps to keep it swingy, there’s always a chance for snake eyes vs. box cars which can entirely turn the tide of a battle. This also helps to keep the frame of reference that this is a game for fun. Sometimes the dice are simply crazy and you have to say “oh, well!”. It’s a game. Sure it’s a historical simulation but there’s no CRT’s and everything is fast paced and simple, compared to other systems. This was a breath of fresh air. Sometimes in other games, we get bogged down in overly complex simulations and heavy strategy, whereas Last Battle: Ie Shima provides a lighter, experience that is very fun to play.

Should I get this game, though?

Honestly, only for solo purposes. If you wanted to play it two player then expect the Japanese player to be bored from being under the cosh for so long, or a huge masochist. Ironically in my solo play through – recorded in it’s entirety for you here – the Japanese player won the game! But it didn’t feel all that triumphant. “Not dying” isn’t a very satisfying win condition in a game this one sided. That being said I had a blast, and this makes the list for introductory solo wargames for me (one day I’ll have to re-shoot that and put it in). It’s easy to learn and easy to play.

I love the artwork and production value in this game and I learned a lot about a battle I knew little about, whilst having a lot of fun. So, honestly, this game ticks a lot of boxes. The rules are easy to learn, and the game is very intuitive as to what you need to do. For a solitaire exercise that you’ll get a handful of plays from I can think of far worse ways to spend $25. Did I mention the artwork? I think I need to mention the artwork one more time. The map is one of my favourite. Area impulse maps can sometimes be a little…lackluster, but this one gives a great aesthetic. It looks like (and may well be a facsimile of) a real WWII era road map of the island. Seriously, it looks awesome and feels very cool to play upon.

Anyways, this game is a neat one for any rainy lonely weekend!