Once again, High Flying Dice Games is doing their thing, delving into lesser known conflicts, and bringing us fun and playable little games from history. Paul Rohrbaugh has been working on a new series of solo play format games called Depths of Courage, which revolves around small 1 and 2 man submarines and their operations during major wars including the Civil War, World War I and World War II and beyond. The two volumes that are currently in the works, and have plans to debut prior to the end of this year, are Volume 7: The Attack on Gibraltar Harbor, December, 1941 and Volume 8: The Attack on Algeciras Harbor, July – December, 1942. I reached out to Paul and he was more than glad to give us a look into these games. Here is the interview:

Grant: What was the genesis for the Depths of Courage series of solo play games? 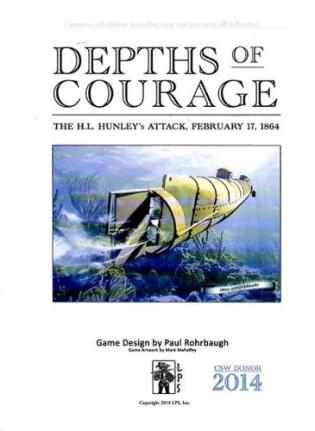 Paul: About 10 years ago, the publisher of Against the Odds asked if I could do a game on the attack of the CSS Hunley during the Civil War. I had also been long interested in that event, as well as the Charleston Campaign. Once I got into actively designing the game on the Hunley’s attack, it occurred to me that a series of games on famous submarine attacks/raids would be even more interesting.

Grant: What other volumes are included in the series? What does their release schedule look like?

Paul: The game on the Hunley attack (Volume 1: The H.L. Hunley’s Attack, February 17, 1864) was published by ATO almost two years ago. I like to do new small mini-games, and variants for games published earlier, to reward subscribers for their commitment and loyalty to ATO. That was one of those bonuses and any left-overs are offered as “Black Swan” specials to anyone to purchase. The same will likely be true for the other 5 in the series that I’ve given to ATO. I am not at liberty to disclose the topics for those games, but they are all from WWI and WWII. I have no idea when those will be released, but they are done with play testing and just need graphics, as well as a publication slot, for them to be released. The two High Flying Dice Games will publish (Volumes 7 and 8) are on the Italian Frogmen raids at Gibraltar (#7) and Algeciras (#8).

Grant: Who did the art for the game? The theme and style is very reminiscent of the 1940s. Was this a parameter you gave the artist?

Paul: Darek Buraczewski is doing the graphics for the game. He is new to High Flying Dice Games, but has done work for several other game publishers before he contacted me to ask if he could do some work with us. I don’t limit artists in any way, aside to guide and making sure the graphics reflect how the game was play tested and finished during development.

Grant: What is your goal for the experience of the players of the Depths of Courage series?

Paul: To appreciate the history of this form of warfare, how dangerous it can be for both the attackers as well as targets, and to understand how this weapons system has become the most lethal form of combat in our time. One Ohio class submarine can deploy the firepower equivalent of all of WWII. IMHO that is staggering (and scary)!

Grant: What do you need to be aware of in designing a solo play only series?

Paul: Focus is first, as well as the historical narrative. Determining who the active player is, what aspects of the history to portray, the decisions that are to be made, and the “play balance” are key. If a player is constantly frustrated, or has too easy a time of it, the game won’t be played and nothing will be learned. There is as much to consider and balance in these small games as in a full-sized one. In these games, size doesn’t matter!

Grant: How do you go about testing the AI?

Grant: What historical events are covered in Volume 7: The Attack on Gibraltar Harbor? 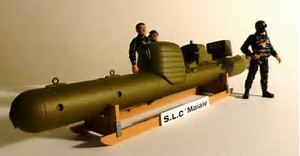 Paul: That game (number 7 in the series) portrays the Italian mini-sub attacks at Gibraltar Harbor. On September 18, 1941, the Italian submarine Sciré released 3 two-man crew S.L.C (siluro lenta corsa) Maiale (Pig) class mini-submarines to attack Allied shipping in what many thought was an impregnable harbor, safe from any enemy attack. The Italian raiders sank three merchant vessels; the cargo ship Durham and two tankers, Denbydale and Fiona. For their daring raid, all 6 of the Italian frogmen, as well as the entire crew of the submarine Sciré were hailed as heroes.

Grant: What does setup for the game entail?

Paul: Players shuffle a standard deck of playing cards after removing the 8 through 10, one Joker, Queen and King cards. The British Alert Level (BAL) and Harbor Defense Level markers are set at 1 on the Turn Record Track. 3 mini-sub units are placed in the Sciré map (start) space, and all are Undetected.

Grant: How does a player determine the enemy units that are located in the target area?

Paul: During the course of a turn (Alert Phase) the active player will perform a DR check to see if any Allied ships are spotted and placed on the map. These can be transports (targets) or warships (that can be targeted, but are worth less in terms of victory point awards and can also make it easier for the frogmen to spotted and attacked).

Grant: Describe the thought behind the layout of the map. How does it guide game play?

Paul: The map is divided up into areas in the harbor that the frogmen had to transit and where their targets could be anchored. The player won’t be sure until they get into the game where the targets or enemy warships will be, how many, and how the garrison’s alert level will change. The active player also needs to get the frogmen back to the Scire to have the best chance of winning.

Paul: There are 5 sub-phases to each turn; Action, Reaction, Alert, Attack and End. There are no limit to the number of turns as play continues until there are no longer any frogmen units in play (all are back in the Scire space or eliminated).

Grant: How does detection happen during the Action Phase?

Paul: During the Reaction Phase the player draws a card. If it is a Face card, a DR check is made against the British Alert Level (BAL) for any one of the Frogmen units in play (active player’s choice) to determine if it becomes detected (or attacked if already detected).

Grant: What increases the difficulty of these checks?

Paul: Whether the frogman unit is already detected and how many escort patrol warships are in play.

Paul: The British Alert Level and Harbor Defense Level increases via card draws, DR checks made during the Action, Alert and Attack Phases. Basically, the more risks/attacks a player makes the more potential there is for bad, as well as good, things to happen.

Grant: What do these two Alert Level elements model?

Paul: These represent the alertness and effectiveness of the harbor’s garrison (HDL) and ships’ crews (warship as well as transport) in responding to the raid, and overcoming the effects of surprise.

Grant: How does the combat step work?

Grant: How does the game come to an end? How is victory determined?

Paul: The game ends when there are no longer any mini-sub/frogman units in play. Victory is determined by earning Victory Points (VP). Each British naval unit has a VP value, and number of VP awarded are based on how many of these units are damaged or sunk during the game. The player wins a Major victory if 10+ VP are scored; a Minor victory is won with 4 through 9 VP. A loss is suffered if 3 VP or less are scored; a Major loss occurs if all of the Mini-subs are sunk.

Grant: What are the various variant scenarios included in the game?

Paul: There is one scenario with some variant units (additional British warship targets that are worth more VP, but also more dangerous to attack as well as a fourth mini-sub/frogman unit).

Paul: Once players master the sequence of play/rules the game plays very quickly. Most are resolved in under an hour (45 minutes is typical).

Grant: What has been the experience of your playtesters?

Paul: They love the games. Most have been playing them between moves with other games we’re working on.

Grant: You have some talented multi-tasking playtesters. I like that! What other volumes are you considering for the future?

Paul: Well, I cannot say until the others in the series are released. I can assure you, however, that at least four more are in the files. I’ll see what the reaction is to these before I turn them loose on the play testers.

Thanks for your time Paul and for the information about this upcoming game. I have been told that High Flying Dice Games is working on finalizing the graphics in an attempt to get this game out for sale prior to the end of the year. Might make a really great stocking stuffer for a wargamer, so be on the lookout for more information.

4 thoughts on “Interview with Paul Rohrbaugh Designer of Depths of Courage Volume 7 The Attack on Gibraltar Harbor, December, 1941 from High Flying Dice Games”