Our brother-in-law, Brum, played Too Many Bones at Gen Con, whose sequel Undertow is currently finalizing on Kickstarter. Here’s his thoughts and why you should jump on board last minute!

Picking what games to play at Gen Con can be the most stressful step of the whole registration process.  Depending on a number of factors, you will find yourself either wasting money or wasting more money to purchase the game you played.  For this purpose I have created a simple algorithm of selecting which games I play.  Step 1:  Does the title of the game induce a juvenile chortle?  Yes → Play it.  No → Play it, but only if no other potentially innuendo-ish games exist.  That’s it folks.  I’m a simple man.  In all seriousness there are a significant number of factors, but with that in mind I found myself scheduled to demo Too Many Bones by Chip Theory Games.

I had no expectations going into the game.  This was predicated around me knowing nothing about the game.  However, what I found was a wonderfully creative co-op RPG with unique elements and mechanics of which I’ve not seen before.  Due to the complexity of the game I’ll be providing a high level overview and will only go into specifics on certain items.

Too Many Bones revolves around 4 whimsical characters called Gearlocs.  Patches, Tantrum, Picket, and Boomer adventure through a series of random encounters while slowly building up skills, equipment, and ability scores; all in preparation for a final encounter with…the Tyrant.  Each character comes with its own specific skill tree, abilities, and specialties enhancing the replayability. 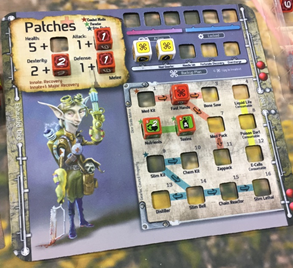 The glass cannon. Min/Max extreme. (He literally has no defense.)

The tank. Picket wields a Tower Shield allowing him to absorb massive amounts of damage while occassionally tickling a monster with his dagger.

The Ranger/Alchemist hybrid. Shoots from the back row, while collecting material components for hand grenades along the way.

Upon unpacking the game it is easy to be overwhelmed.  The number of dice, cards, tokens, trays and mats is alarming.  By sheer happenstance I sat near the demo tables for Too Many Bones one morning, before my demo, and almost began to feel anxious at the sheer scope.  At first glance it is hard to imagine how the first play of the game wouldn’t take at least five hours; two of which would be for set-up!  However, that fear was misplaced.  Chip Theory Games made it a point to provide not only trays for each dice set and character, but the dice themselves are numbered, color coded, and have pictures on them to eliminate the confusion. 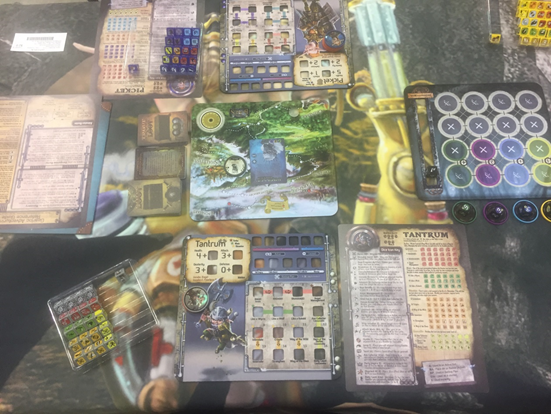 What you see above represents what a photo looks like with a fogged over lens, but it also shows about 75% of the game board.  Missing are two more sets of player dice and the monster tokens.

Chip Theory Games eliminated the traditional game board.  In its place is a mat that is utilized for encounters, providing simplified movement and battle mechanics.  A side effect is that it encouraged discussion among the players.  That discussion revolved around surviving instead of the scenario we have all found ourselves in when the decision has no lasting negative ramifications with the party simply saying, “Should we go here or here?”

The mat is used for battles and initiative, but is otherwise blank.

It becomes obvious early on that the whimsical feel of the characters doesn’t extend itself to decision making.  Each decision made by the group has a very clear risk versus reward.  Each encounter card has multiple options.  One particular encounter option my group did required that the glass cannon be in the party.  None of the other three characters would be able to successfully complete the encounter.  This at face value would seem flawed, but the developers did well to ensure that if the risk revolved around death that the entire party was involved in the encounter.  However, if you were to successfully complete the encounter you would find yourself with much needed training points and equipment.

On each encounter option is a list of rewards.  The rewards can come in the form of individual loot, group loot, training points, trove loot or encounter points.  In-between encounters each member of the party can heal, scout the monster tray or try and opening trove loot.  One particular encounter gave everyone trove loot.

To open it you have to roll 4 dice and you are in essence slowly picking locks.  The more difficult the rolls, the better the loot.  You have to make three checks that must be done in sequence, but do not have to be done all at the same time.  Meaning, if you succeed on the first check and fail on the second, you start on the second check after the next encounter.  I must emphasize that for the demo I played it became essential to get some trove loot.

To expand on the depth of the game the developers added flavor text to each encounter card.  My group enjoyed reading them out loud and it helped with the immersion.

The order of the encounters in the encounter deck is random, except the top 3.  As some encounters can be devastatingly hard the developers decided that some easier ones to get you on the right track would be prudent.

Ultimately the party is working to move through encounters and gather enough encounter points to tackle the Tyrant.  The Tyrant is different based on each scenario.  For my party of four it was a highlight.  There was a large amount of strategizing, but also an RNG element.  Time was running short and the GM needed to start setting up for the next demo.  We had a single round left.  We knew that it was going to be either the Tyrant or us and about 3 different random events had to line-up for us to win.  Yes folks, the RNG gods shined down upon my group as we slayed the Tyrant.  We felt pretty proud of ourselves and were then told by the GM that we were the FIRST group to beat the scenario in two years of demos.

Like any good player we immediately asked what we won.  Spoiler folks there wasn’t anything extra except for the satisfaction of having completed it.

Overall I have moved this game into my Top 10 games.  It is so unique, challenging, and whimsical that I naturally gravitate toward it.  I am also a huge fan of coop games.  Of course, it does come with some short comings.  For its price point there is not a very long replayability.   You will quickly make it through all the monsters and encounter cards.  Also, with so many small peripherals it is likely people will lose a piece or two which would be very disruptive.  However, as long as someone is vigilant they will find many hours of enjoyment from Too Many Bones and of course there is plenty of room for expansions….as you will see.

Now for the best news for those who are interested.  Chip Theory Games is currently running a Kickstarter where you can get an unmatched price and offering on their new expansion for the base game, Undertow, but also get the original Too Many Bones.  However, act fast for as I finish writing this there are less than 2 days remaining!