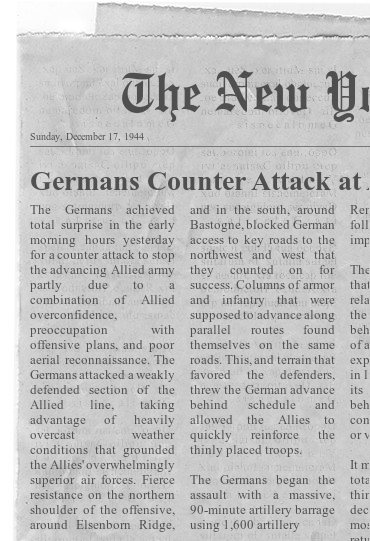 Winter Thunder is a substantial revision of a previous design from Brian Train called Autumn Mist. The new version includes many changes including a newly researched Order of Battle, with revised counter values and reinforcement schedule; cleaned-up rules including a solitaire play system; and a drastically revised map with a different ground scale and treatment of terrain. This is a very approachable and playable game on one of the more infamous battles of World War II, the Battle of the Bulge, and is one that I have been interested in for awhile now as I really like Brian Train designs. 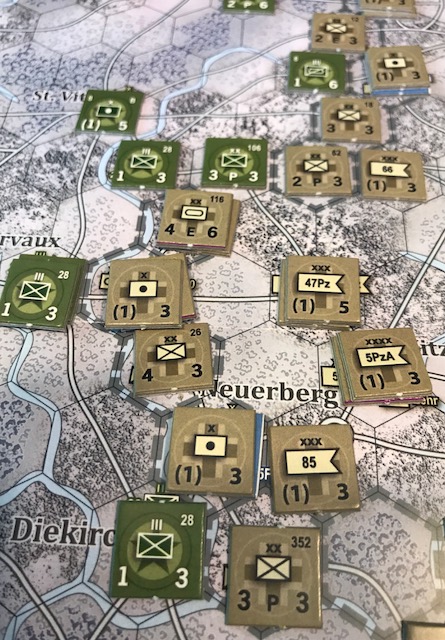 In this Action Point, I want to take a look at the Operations Phase that is used as it is pretty novel and works very well for the game. The system requires players to activate various formation HQs through a random activation process using one of my favorite methods, the chit pull. Players place various available HQ counters (see picture to the left that shows HQs as chits with flags in the center of the counters rather than a NATO symbol) into a “Dunnigan Ceramaceous Randomizer” (or simply a clean, dry coffee cup) and draw them out one at a time. The HQ chit that is pulled can then be used to activate nearby combat units within command range to move and fight. The HQs are specifically named but are not restricted to only being able to activate units associated with that formation. Instead, HQs can be used to activate any friendly units within range, which is determined by tracing a line free of enemy units no longer than 5 tactical Movement Factors (MF). Once a unit has been activated, it cannot be activated again on this turn and is turned sideways to note that. This system works very well and is pretty flexible as compared to other chit pull systems I have played. It also simulates the fog of war as you will not be able to activate the specific HQs and units that you necessarily want to. This can be somewhat frustrating at times as you could, if you could only draw the correct HQ chit, assault a weakened Panzer stack and remove them from the game. But, before you have the chance to activate your units to carry out that plan, the enemy draws the correct chit and reinforces or “digs in” those units making your task much more difficult.

The combat resolution system is also very unique. It uses a near-diceless system (a d10 is used to check if a particular unit takes casualties, but whether a check is required arises only after comparing attack and defense missions chosen by the players). When a combat is initiated from an adjacent hex, each player will secretly choose a chit from among those aligning with their posture, either from the red colored Attack Mission chits or the blue Defend Mission chits. The Attack Mission chits include action such as Balanced Attack, Infiltrate, Blitz and Frontal Attack. The Defend Mission chits include actions such as Stand Fast, Balanced Defense, Defend in Depth, Counter Attack, Delay and Withdraw. These drawn chits are then located on the Mission Matrix Table and DRMs are given for attack and defend actions and whether one side or both will take casualties.

This system is really cool and took us a few rounds to really figure out. Each action chosen should be chosen for a specific purpose in mind and can go along with the strategy needed to win the game. During the early rounds as the Americans, I found myself choosing Delay or Withdraw often as I didn’t have the powerful units to stand up to the mighty German forces. This meant I was able to retreat without taking casualties in order to delay the German advance until my more powerful units, such as the 82nd Airborne and 101st Airborne units, would appear in round 3. Or I could even choose a Balanced Defense if I wanted to force the Germans to take casualties if I only had one step units defending, as their loss didn’t count toward Victory Points in the end but would hurt the Germans if they happened to lose a 2 step unit. 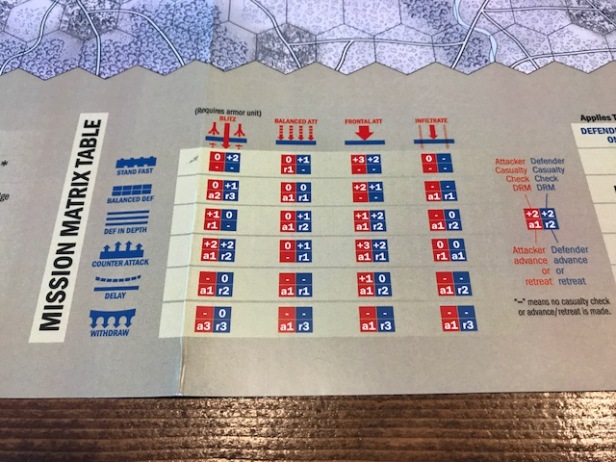 Once the matrix is checked, units will be forced to take casualties, if and only if, the chosen action allows for casualties. Notice on the above Matrix that a “-” means that no casualties will be taken by either side in that phase. Casualty resolution is pretty simple. The player will simply calculate his Casualty Check Total (CCT) which is done by adding up his total Combat Factors in the battle, plus or minus any modifiers as identified in the Mission Matrix Table, and adding other modifiers such as terrain factors. This CCT number is simply compared to a roll on a 10 sided die and if the die roll is equal to or less than the CCT, the unit must take a step loss. After losses are calculated, if any HQs are eliminated, they are removed from the game until the next Turn End Phase, where they will reenter the game as directed. Then any Advances or Retreats, as indicated again on the Mission Matrix Table, are carried out with the defender going first followed by the attacker. This can be a key to the game as this step will set up the Germans for quick advances, using Exploitation, or can pin American units or move them out of Command Range.

Overall, Winter Thunder is a very unique take on the Battle of the Bulge and is an enjoyable play experience. In our next Action Point, we will take a look at several of the special actions available to players including Exploitation Movement, Improved Positions and Roadblocks. If you are interested, you can check out our unboxing video to get a better look at the components.

One thought on “Winter Thunder: The Battle of the Bulge from Tiny Battle Publishing – Action Point 1”