You will not find any spoilers in this interview with Matt Leacock regarding Pandemic Legacy: Season 2. In fact, you will probably learn more about the game by reading our preview written after our demo at Gen Con 50. I reached out to Matt early this year but understandably, he wanted to wait to answer my questions until the game debuted at Gen Con. I was one of the lucky ones able to play a demo game and I can say that I really liked the changes that have been made. While it feels like Pandemic, there are enough new turns and twists that it definitely felt different. Onto my interview with Matt: (you will note that several of my questions to Matt were left unanswered and he would simply reply <Spoilers> and leave it at that.)

Grant: First off, congrats on the success of Pandemic Legacy: Season 1 and for getting to this point with Season 2. One silly question I have off the top of my head. With Season 1 complete and the elements of the story being played out, are there anymore  of that type of boards and cubes left in a huge warehouse somewhere that need to be gotten rid of? Will we ever see that board again is what I am wondering?

Matt: I wouldn’t expect to see that exact same board again in a new product. There are too many other (new) stories to tell!

Grant: How have you felt about the success of Pandemic Legacy and has it surpassed your expectations?

Matt: Yes! Rob and I had no idea that the game would take off like it did. When we watched our playtesters binge play it, we thought we were on to something good, but didn’t expect it to climb up the charts as it did.

Grant: When you were asked how to move the Pandemic series forward, what was your first response? What ideas immediately came to mind?

Matt: I remember having this very discussion with Sophie Gravel at F2Z years ago. We brainstormed a number of directions we could take Pandemic including new expansions, a dice version (which became Pandemic: The Cure), a possible card game, and a legacy version. I remember laughing off that particular idea. At the time, that felt like too big of a stretch for me as I was working full time and had no idea where I’d start. 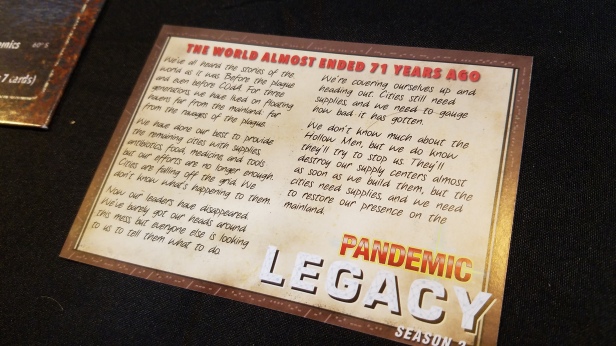 Grant: In the end, how did you decide to set Pandemic Legacy: Season 2 71 years in the future? What process did you go through to flesh out the world and how it would have been changed in that period of time from the end of the events of Season 1?

Matt: There were a whole host of factors, that I can’t go into as they’d spoil the story. I can say that setting it in the future does (usefully) help decouple the story from the specific events that happen in any one game of Pandemic Legacy: Season 1, however.

Grant: I was fortunate to be able to play a full demo of Season 2 at Gen Con 50 and frankly, really enjoyed the game. I enjoyed the idea of the Havens and really like the thought of being able to explore the world. What mechanism allows for exploration of the unexplored regions of the map? How are these areas uncovered, meaning what do you place on the board to show what is really there?

Matt: You can explore the world by doing the Recon action in specially marked cities on the board. (This is in the base rules and is not a spoiler.) We don’t tell you how you learn about the world until you Recon.

Grant: Is Season 2 still set to cover a 12 month period? Will you have the same two opportunities to beat a month before you are able to move on?

Matt: Yes, the structure is similar to Pandemic Legacy: Season 1. So, if you’re familiar with that, you’ll be right at home.

Grant: I really liked the new look of the characters and feel that the art is a much better fit thematically for an apocalyptic setting. Who is the artist and what was that process of choosing the look like?

Matt: Atha Kanaani and Chris Quilliams did the illustrations in the game and Philippe Guérin did the graphic design and art direction. We had many discussions with Philippe about the look of the game as it’s driven by the story. It was wonderful to work with this team as they really cared about making the world come alive and getting all the details right.

Grant: Season 2 seems to have gone the route of “uber” customization, allowing players to choose a character card as well as their specific ability. Why did you feel this was important to include in the game?

Matt: Rob and I have found that players get attached to their characters as a season unfolds, and this was another opportunity for players to shape them. Players start with characters who are regular, everyday, Haven workers. Rather than being super-heroes, they’re the teachers, administrators, and sanitation workers of this world who have stepped up to lead in a time of crisis.

Grant: In our demo, we never got to experience any type of exposure to the plague, but I noticed on the player cards there are scratch off areas. What causes these areas to be scratched off? What happens with each one that is revealed? Are there bad things under that shiny surface?

Matt: If you start your turn in a city with a Plague cube, you get “exposed” to it and must scratch off a spot on your character card to see what happens. This may have no effect, cause a scar, or even death. Each character card’s life track has different, hidden characteristics so you’ll never really know what will happen.

Grant: A little piece of foreboding on the player card as well is the “Place of Death” slot. Why did you feel this needed to be included? Is there a game purpose or is this just more flavor?

Grant: I love the new mechanic where players are focused on spreading supply cubes around the map rather than in removing disease cubes. Where did this idea come from? What other concepts had you flirted with?

Matt: We asked ourselves, “what would happen if we did Pandemic in reverse?” In this game, the world has collapsed – in a sense, humanity has already lost the game – and the cubes on the board (representing supplies) are good, instead of bad. The rhythms of the game will feel very familiar, but the play is different.

Grant: When supply cubes run out in a city and that area is chosen via card draws, plague cubes are placed. Where did this thought come from? Is that plague naturally occurring or is it a holdover from Season 1?

Grant: In the demo, we had no way to remove plague cubes from the board (we were lucky in our demo that none were actually placed). Is there a way to remove these cubes?

Grant: The game still feels like Pandemic but I also wanted to congratulate you on making it feel slightly different though. How important was it to retain a similar feel? Do you feel it will undergo even more changes as the franchise progresses into Season 3 and beyond?

Matt: The challenge we set out for ourselves was to make it fresh and exciting while still letting players jump right in. It’s important to me that each variant and expansion brings something original to the table and not simply be a rehash of older ideas.

Grant: What do you think will shock and surprise players in Season 2? What do you feel will be the most rewarding part of the new game?

Grant: What is the timeline for release?

Grant: Are you already working on Season 3? Anything you can share with us?

Matt: Yes, I think Z-Man let it slip that we’re working on a third season. It’s too early to share anything other than we’re having a lot of fun working on it.

Thanks for your time Matt. I for one am looking forward to exploring Pandemic Legacy: Season 2.