When the War of 1812 broke out, the British immediately seized control of Lake Erie. They already had a small force of warships there including the sloop-of-war Queen Charlotte and the brig General Hunter. The schooner Lady Prevost was under construction and was put into service a few weeks after the outbreak of war. These vessels were controlled by the Provincial Marine, which was a military transport service and not a naval service. Nevertheless, the Americans lacked any counter to the British armed vessels. The only American warship on Lake Erie, the brig Adams, was not ready for service at the start of the war, and when the American army of Brigadier General William Hull abandoned its invasion of Canada, Adams was pinned down in Detroit by the British batteries at Sandwich on the Canadian side of the Detroit River. The British Major-General Isaac Brock used his control of the lake to defeat Hull’s army at the Siege of Detroit, by cutting the American supply lines and rapidly transferring himself and some reinforcements to Amherstburg from where they launched a successful landing on the American side of the Detroit River. So the control of Lake Erie was a significant goal for the fledgling Americans if they had any hopes of taking Canada and ending the conflict.

In the first unqualified defeat of a British naval squadron in history, U.S. Captain Oliver Hazard Perry leads a fleet of nine American ships to victory over a squadron of six British warships at the Battle of Lake Erie during the War of 1812. 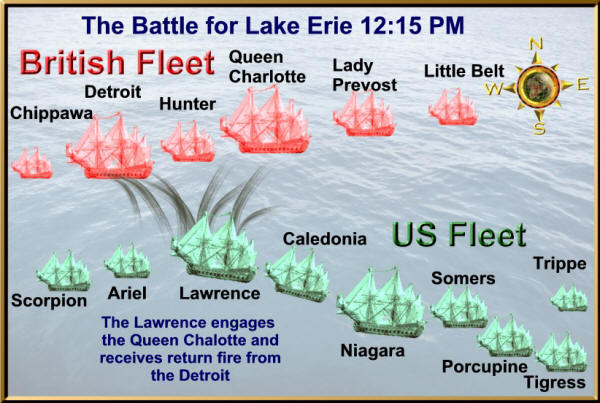 This battle, sometimes called the Battle of Put-In Bay, was closely contested for hours, and Perry’s flagship Lawrence was reduced to a defenseless wreck. He then transferred to the Niagara and sailed directly into the British line, firing broadsides and forcing the British to surrender. Perry had won a complete victory at the cost of 27 Americans killed and 96 wounded; British casualties were 40 dead and 94 wounded. After the battle, Perry sent a famous dispatch to U.S. General William Henry Harrison that read, “We have met the enemy, and they are ours.” The Battle of Lake Erie forced the British to abandon Detroit, ensuring U.S. control over Lake Erie and the territorial northwest for the rest of the war, which in turn allowed the Americans to recover Detroit and win the Battle of the Thames to break the Indian confederation of Tecumseh. It was one of the biggest naval battles of the War of 1812.

Mr. Madison’s War: The Incredible War of 1812 from GMT Games

I don’t know that I have even heard of another game on this subject but have been fascinated with Mr. Madison’s War: The Incredible War of 1812 from GMT Games that was released in 2012. The game is a wargame based on the U.S. campaigns to take Canada in the years 1812-1814. The map board measures 35”x24” and covers the northern part of the states of New York, Pennsylvania, Ohio and the Canadian provinces of Upper and Lower Canada, the area where most of the battles were fought during the war. The game contains over 203 counters that feature the named regiments and battalions that fought the war, including militia and Indian units. Also included are named individual Schooner, Brigs and Frigates that fought the naval war on the great lakes. The principal leaders of the war are included such as Major General Isaac Brock, Sir George Prevost, Major General Hull and many others. 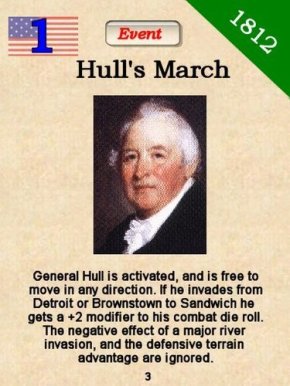 The game utilizes a card driven system, which enables players to perform their actions on the game board and score automatic points for the playing of a card as an historical event. The colorful cards include historical information, the year the event took place and a detailed description of the function of the card. There are 110 individual cards in the game. I love CDGs, both for the struggle of having to manage your hand to get the most out of the cards, but also for the attempt to minimize the negative effects from your opponent’s events. I also love the historical experience that the cards give players as there is a great deal of information contained on the cards that serve no other purpose than to educate the players on the history of the conflict. The objective of the game is to gain Victory Points by invading your enemy’s territory while maintaining your own. In complexity, the game would be rated as average and would appeal to any student of the Napoleonic Wars in general. It is at present the most comprehensive treatment of the War of 1812 yet offered to the public.

The game uses point to point movement, which is a commonly used system for games in the 16th and 17th century, as movement was more of a challenge due to terrain, weather and a lack of dependable transportation networks. The map is well done and really seems to focus on the action along the banks of Lake Erie and Lake Ontario.
I hope you have enjoyed this installment of On This Day in Military History… as I have been looking for an event that would allow me to highlight this game.  I hope you will give Mr. Madison’s War a try and let me know your thoughts on your play experience.
-Grant