Elections are often a period that many people don’t look forward to. They’re a time of great policy upheaval and political discussions, as well as a glut of annoying tv commercials, which can polarize many. It’s not really a theme I would intuitively slap on a board to sit down and play for fun on a weekend or evening, but 1960 had me intrigued from the start. There’s plenty of election themed games out there, but 1960: The Making of the President might be the only one that I have an interest in playing. I have a huge interest in the Cold War and I’ve played a few games out there relating to the Cold War itself, or at least the events surrounding the 1960’s and world affairs of that time. I jumped right in with both feet and here’s what I found:

1960 Isn’t a new game by any means, but the version we just played is the newest GMT edition released in 2017. The previous edition was from Z-Man Games, and I hand’t played it, or even seen it properly, so I can’t really compare the two. What I can say is that I’m very happy with the production value in the game. It’s up to the highest quality of GMT standards as far as components go – you can check out everything in the box right here.

Card Driven Games are one of my favourite types of games, as there’s simply something really

rewarding about the hand management puzzle you have every turn in conjunction with the game board at large. CDG’s do a really good job of presenting you with difficult resource management problems, without getting extremely dry, mechanical and mathy. Counting and recounting cubes or resource chits etc. isn’t really my idea of fun, and too much book keeping slows a game down and can break the back of the game in my mind. 1960 doesn’t do that in any way. The cards look a little busy, but they’re actually beautiful and very simple to understand once you get the basics down. They use a CP value that can be utilized to put colored wooden cubes on the board for influence in various states, in the media, or with key political issues. The other major option I to utilize them for their events. The events are almost all self explanatory and in a deck of over 100 different cards, that’s a pretty nice feat. I can remember one single instance where the card text could have seemed vague, but contextually, it was very obvious how the card should work.

The other things you do with the cards are storing them away in the “campaign strategy” pile, which means they’re used during the debates phase to win issues, or on Election Day they give you valuable ‘support checks’ that represent wild voting in swing states. Basically, the card mechanics are very familiar if you’ve ever played any kind of CDG, but they’re extremely clean, and fairly simple to understand. The hand management doesn’t make you want to pull your hair out and the struggle between deciding on playing cards and storing them into the campaign strategy gives you a cool extra level of strategy but won’t leave you with hours of AP.

The Struggle is Real

1960 is a game that has a lot of ebb and flow to it. Being a CDG you do get a lot of the same feelings that you do in games like Washington’s War or Twilight Struggle, but the reality is, is that there is far less stress. For me, Twilight struggle feels like every territory is a tug-of-war and that every single point is worth fighting a small war over. In 1960, the people’s minds are fickle, and their opinions sway so often that it takes some of the edge out of it. You’re playing something more like whack-a-mole where you’re furiously blazing the campaign trail to try and curry favour, and keep it, with every state. You know this is an impossible task. But you try it anyways. Where you once had a strong lead, after  the play of a key card or two now suddenly has swung the other way, but it’s okay, because you just took two other swing states away from the opposition and he is feeling the same concern as you. And so it goes. 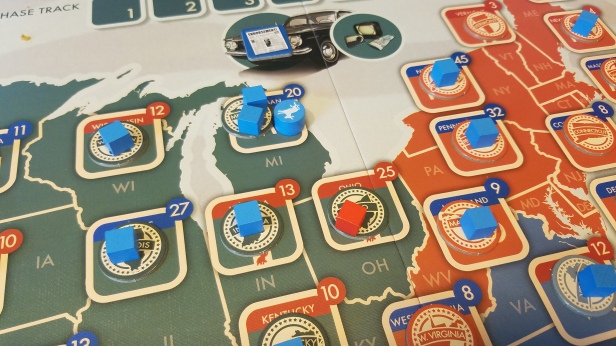 We found that as much campaigning as there was in each of the states, that vying for regional influence with the media was also very important. Media support enables you to altar the positioning of the issues track. Having influence on the issues themselves provides bonuses in the form of endorsements or momentum markers based upon their position on the track. Why do you need endorsements and momentum? Endorsements will swing neutral states in the given region to your side on election day, obviously very powerful. Momentum markers are used to trigger events that benefit you which are played out of your opponents hand for the CP’s.

I loved this mini economy/resource management aspect to the game, it was also a breath of fresh air compared to some other CDG’s. Labyrinth and TS just punish you for having opposition events in your hand. It feel awesome at times, that level of tension and stress, but I swear that games of Labyrinth shave years off my life. The opposite end of that was Wilderness War where no events for the opposition ever triggered. This gave a very different feel to the game where I didn’t really care about my hand, it was purely a numbers game, and I think I liked that less. The hand management is one of my favourite parts of Card Driven Games.

I spent time weighing up which cards I’d play for the opposition to try and get them to use up their momentum tokens. Once they were used up I could freely use the much worse cards without recourse. On top of that you can preempt the triggering of an enemy card by spending two of your own momentum tokens, a heavy price indeed but often a necessary one. I think this mechanic kept the issue track relevant, and made the hand management dynamic, but not overly stressful. Kudos to the designers on creating a really good balance in this aspect of the game.

Do I really need to buy an election game?

I never thought I’d say this about a US election game, but you kind of do! As much as we’ve talked about in this review, there’s so much more to this game. There’s a political capital bag that you’re seeding the whole game with cubes of your colour. This bag determines initiative, helps you keep influence in states that you carry and many other things. The Debates are represented as a whole mini game in turn 6 which I really enjoyed. The debates themselves have some interesting strategic decisions, but they’re mainly a confluence of your strategies in setting cards aside and keeping control of the media and political issues. They’re an nice break from the routine of the game. It’s probably psychological but you have 5 turns, debates, 2 turns, and then the election. So the game breaks up nicely into chunks and doesn’t become a repetitive slog.

The game culminates in the Election itself which is counting up the Electoral College votes for each state you win, neutral states swing the way of the player who controls the media in that region. Your campaign strategy cards allow you to make support checks and try to swing states in your favour at the very end, so even counting the VP’s (so to speak) has it’s own fun gamey dynamic to it.

This is a fantastic game. It’s an accessible CDG with some really nice strategies. It’s not particularly take-that or in-your-face, but there’s a little bit of that if you want it. The rules are simple enough, and the game plays in 2 hours. That’s not a GMT 2 hours (read: 4 hours) but a start to finish 2 hours. The game is paced perfectly for the topic. I don’t want to spend any longer playing an election game, but the fast pace means the whirlwind of the campaign trail never dulls. I’ll be using this game to teach CDG’s to newer gamers from now on.

7 thoughts on “Review: 1960 The Making of the President from GMT Games”