Welcome to part 2 of my continuing series of AARs for Unconditional Surrender! World War 2 in Europe. Thanks for sticking with me on this one. There’s a few things I wanted to say before we dive right in. Firstly, every turn I play of this game I’m just reminded of what a unique and top quality game this is. The map is massive, and can seem daunting but the Germans barely have 20 counters on the whole table. I cannot express to you how playable that makes this monster. I wouldn’t even call it a monster with how quickly each turn goes. The stacking limit of 1 ground unit makes unit admin a dream. You don’t have to dismantle 15 counters just to calculate odds of combat. And I’m so happy that the tweezers can stay in their place whilst I do this one.

Secondly Sal, the designer, commented on my first AAR making sure that I was keeping up with some of the conditional events and asking if I wanted to roll back the German invasion of the Netherlands. Delaying this invasion would have allowed the Germans to get a significant number of units on the board and at full strength by ~February 1940. In turn that would make the blitzkrieg of Holland, Belgium and France much easier. When I read the rules after I had invaded Holland it was clear I had made a blunder as the Axis player in trying to get greedy early. Sal’s comments reinforced that fact. I chose not to roll it back because Unconditional Surrender! is one of those magical games that if you make all the same decisions – timing wise at least – as were historically made you’ll get a pretty decent representation of WWII. But on the other hand there’s a world of infinite possibilities to be explored had strategic decisions been made differently. So that’s what I’m pursuing!

The weather in central Europe took a turn for the worse. Ironically enough the Cold Zone stayed as fair weather, but the mild and moderate zones both became poor weather. This poor weather carries an increased movement point cost when using mobile combat, as well as a -2 DRM when attacking. Polish National Will was already very close to collapsing so when they lost 2 ground units they were teetering on the brink. 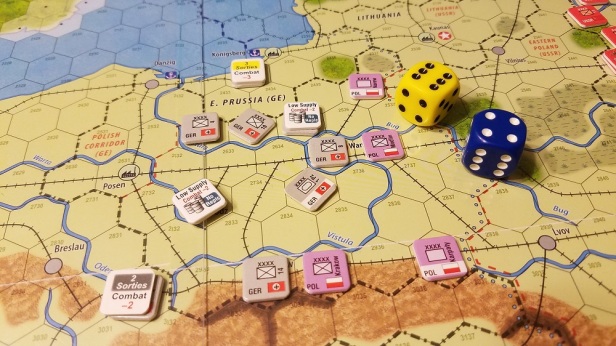 The 1st Panzer Army rolled out of Posen and tried to cross the Vistula and storm Warsaw. Fortunately, the Polish were able to put up a very stout defense along the banks of the river and not only halted the mechanized advance, but also turned them back inflicting embarrassing losses on the columns of Panzer I’s and II’s. Alas, the victory would only be short lived for the Poles. A few days later, aided by the 1st Luftwaffe, the 8th German Army marched across the river and drove out the Polish defenders. On seeing the Nazi flag waving in Warsaw, the Polish national will collapsed and the country was officially conquered within just 8 short weeks.

As a result of this, Eastern Poland, a heavily disputed region, “ceded” to the USSR and Romania became Pro-Axis after witnessing the might of the German War machine and deciding to try and throw their luck in with them.

By the end of the turn, the Russians had moved up their lines to protect their new sovereign land – Eastern Poland. The 1st Panzer Army received replacements and a few sorties were removed from the Luftwaffe counters.

The Allies fared much better on the Western Front. No waves of German troops are breaking on the Maginot Line, but the fortresses are funneling German units north and bogging them down in EZOCs. The inclement weather has stymied the advance of the Germans, but also has made counter attacks against them very difficult as well.

The 2nd French Airwing flew successful Air support missions, which primarily kept sorties on the Luftwaffe rather than actually providing any significant DRM shifts in combat. Those Sorties make a huge difference though, and keeping the Luftwaffe bogged down with lots of them is an excellent strategy for the Western Allies. Both the Belgian army, as well as the First French Mobile and Second French Armies were unable to dislodge the German armies on the border. Both the terrain and the weather meant that most of the combats had no modifiers and progress ground to a halt for both sides. The French were able to drive the Germans out of Amsterdam however, which put the Axis on the back foot on the Western Front.

Desperate for more troops the mobilization phase could not have come soon enough. The Germans were able to put out two reduced leg units and a garrison in Berlin.

All in all, a mixed bag. During the diplomacy phase the Germans had no resources so could do nothing, and both the Allied factions spent resources to place both political success markers back into the cup for the end of November. During November, the Airdrop event is now available to the Germans. Watch out Norway. 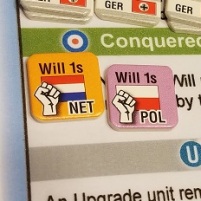 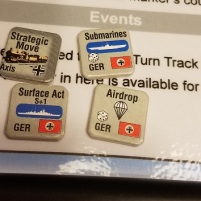 Thanks for reading once again. I imagine November and December will be a slow process of building up armies for both sides and shoring up lines for all out war in the spring.

4 thoughts on “After Action Report for Unconditional Surrender! by GMT Games – October 1939”