This will be the first post in a series of brief AARs for my solo full campaign of Unconditional Surrender! from GMT Games. I picked this game up a while ago and have been dying to get the full game played. Grant and I played the Case Blue Scenario from C3i Magazine #28 last November and really enjoyed it. I cannot speak highly enough about this game system and its playability.

September 1939 – The Invasion of Poland

Setting up took more time than I’d like to admit, even with the low counter density. Most of that was putting the units on the turn track, but once it was done, I was itching to get started.

The Poles put up some stiffer than expected resistance and the 2nd Panzer and 16th Infantry Army actually caught themselves out of supply I believe. The Polish National will is dangerously close to breaking, however, and likely won’t last through October.

The Western Front was a little stickier. The Axis forces gambled on trying to take Belgium and draw the French forces northwards as well as to avoid the mighty Maginot line. The Belgians put up a stout defensive effort, unlike the Dutch who were swiftly swept aside. The French counterattack against Amsterdam was a huge failure and the French army took a step loss. I could very well see the Western Front getting bogged down quickly.

During the diplomacy phase the German’s pulled a Pro-Axis counter (placed in the cup due to the conquering of Holland) and both the Western Allies and the USSR pulled political success markers. So it was a very active phase. The German’s made Italy a pro Axis country, the Western Allies are trying to bring Spain into the War, and the USSR is trying to bring communism to Turkey. 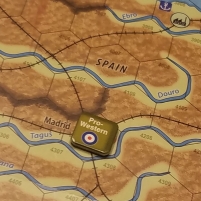 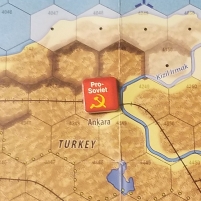 Mostly, I just wanted to try some new things and see if Spain could become a player in the war effort. The Italians hopefully joining the Axis will help to expand the Axis forces and give them a stronger base of power in central Europe and the Mediterranean. The USSR is just being opportunistic and trying to spread politically whilst the Nazi-Soviet Pact is still in effect. They know what is coming!

All in all, I’m having a total blast! I’m going to try and do a turn every night, so these AARs might be more sporadic but will contain more info in them. I love this system, I love the low counter density, and I love how wide open, and non-scripted the war is already. I’m probably butchering some rules, so if you see anything egregious, just let me know!

8 thoughts on “After Action Report for Unconditional Surrender! by GMT Games – September 1939”