High Frontier is Phil Eklund’s space exploration and exocolonisation game put out by Sierra Madre Games. Phil Eklund is one of those designers that is known for modelling detail, realism, and simulation – High Frontier is no exception. Grant showed me this game a few months ago and I took one look at the board and wanted to play it. I remember the description said it was the most accurate simulation of modern rocketry and that board which has the entire solar system with all of those routes printed on them: I was hooked.

Primarily a resource management/pick-up-and-deliver game, High Frontier delivers a unique experience in the board gaming world. I’m not going to sugar coat this, but this game is a beast. The rule book, at first glance, seemed fitting of a Mark Herman war-game it’s that big. However, it’s actually not as intimidating as it might seem; the rules book is somewhere around 60 pages, but for the basic game, you’ll use only a fraction of that book. There’s so much extra stuff in the rule book that covers the advanced rules, colonization rules, and then super advanced rules! The text in the rule book is also pretty large in typeface, so even though it might seem like a lot to digest, its not really all that dense. 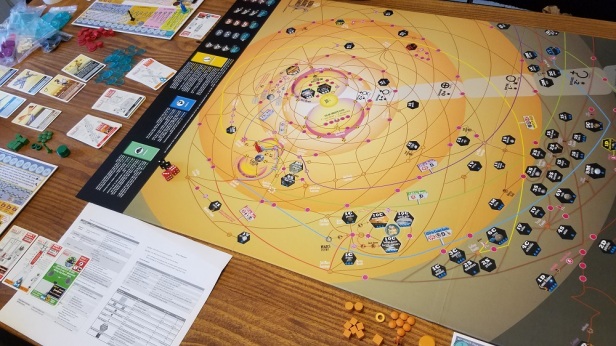 I didn’t think I’d ever say this about High Frontier, but it’s actually pretty rules efficient. You’ll auction off different technology cards, which represent advanced thrusters, refinery equipment, and ISRU exploratory/robonauts, that you have spent dollars on doing research and development and therefore own the patents to. Once you’ve gathered what you’d like you’ll package them together into a rocket (assembled in Low Earth Orbit or LEO) and then boost out into the solar system. You’ll then try to lay claim to planets, asteroids or other heavenly bodies in the name of your Space Organisation (ESA, NASA, etc.) in order to drop off robonauts and refineries that can be combined and converted to make factories. After 6 factories have been built the game ends and VPs are calculated: Most VPs wins. That’s pretty much it. The most significant and strategic part of the game is managing your Water Tanks, which are both a  fuel source and a form of currency.

But seriously, not a drop to drink. This game is very much a sandbox, and just like a sand box there’s very little water available. A large portion of High Frontier is route planning, and fuel management. Each clear disk you have represents a water tank, which is used to pay for the technology that is auctioned off as well as used to power your rockets. One of the best parts of the game, and an improved implementation over the second edition, is the fuel/mass track on the Player Card.

You expend fuel at a rate that is based upon the mass of of the rocket you construct. One of the things Phil Eklund tried to model is the fuel efficiency of your rocket, which makes you consider your fuel in a different way than your average board game. If I was playing almost any other game, I’d just load up with as much fuel as I could carry in order to be on the safe side. High Frontier however calculates your fuel consumption rate not only based on the dry mass of your rocket, but also the wet mass, so the more fuel you load up, the higher the mass of your rocket, subsequently you’ll get less efficiency. You can refuel out on asteroids and planets but that process can be labourious and unbelievably slow (trying to extract water from an asteroid is hard, right?). In effect, you have a game that requires a lot of thinking and planning, but if you can stick to your plan then the execution moves along pretty smoothly – that is of course, unless you miscalculated during your mission planning! 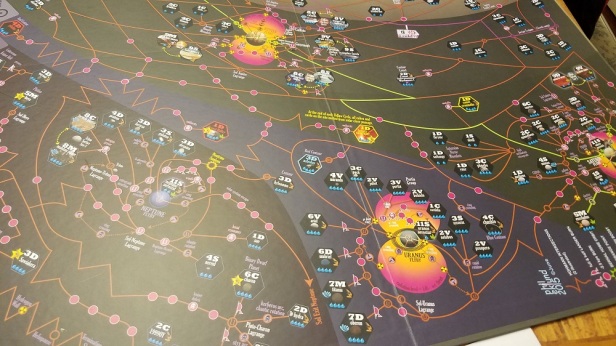 I suppose this game has the largest scope of any game I’ve played that is grounded in some aspect of the real world. Although there’s some sci-fi tech in this one, most of it is actual prototype research that’s going on in the world and might be available in the next 50 years. The Map board has the entire solar system on it, and at first glance, can seem daunting; look at all those colours and shapes, but really it isn’t all that bad. Some of the more major routes and ‘popular’ destinations have been marked with different colours, and even labelled with how many burns it takes to get there. This is actually really helpful for planning, at least early game, for those more major routes.

The longer we played High Frontier, the more I understood it. That might seem like an obvious statement, but after reading the rules the first time you’ll understand what I mean. It’s not that the rule book is terrible, although it could do with a good amount of work, it’s just that the game itself is so vastly different than any other game out there you have to realign your thinking to really ‘get it’. Even then I still don’t think I scratched the surface of everything. There’s a bunch of advanced rules that include radiation shielding, colonization rules, and even more technical aspects of space exploration. 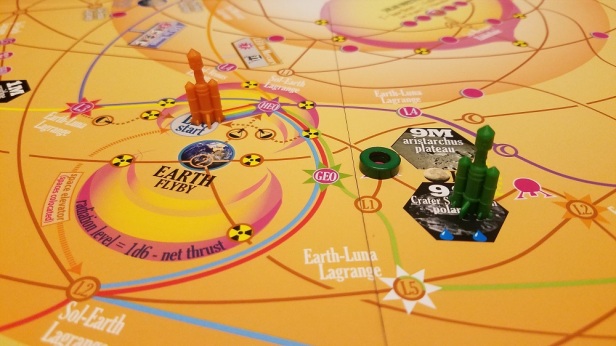 But after a while it felt really good to be burning and boosting around the solar system, performing fly-bys of Mercury with my Solar-Sail, or launching rockets far out to the asteroid belts. The movement of your rockets, as well as the fuel management, honestly does simulate rocketry really well.

Is this game for me?…

This is a real toughie. I can unequivocally say that this game is not for everyone, indeed, I’d go a far as to say that this game is not for most people. It’s a very heavy and detailed simulation (at least comparatively speaking). As amazing as the board looks, I can fully understand how this one can feel quite dry whilst playing it. I personally didn’t feel that way, but not everyone at the table shared my sentiments.

There’s a couple of aspects of the game, that were still hard to wrestle with even after pouring through the rule book and playing for close to three hours. Grant spent an hour stranded on an asteroid, collecting 1 water each turn. Now, I understand that’s a by-product  of the thruster he was using and it’s fuel capacity/efficiency, and it’s considered to model the difficulty of extracting water from an asteroid, but come on. As realistic as that might be, he needed all that water to accelerate the mass off an asteroid, spending an hour effectively doing nothing makes for a bad gaming experience. Could he have planned better? Should he have used a different thruster? Should he have chosen  different area to attempt to land? I don’t know. We looked through the rules and thought through every feasible scenario and there just wasn’t all that much else he could have done. He prospected a planet that was viable, based on his ISRU (exploring tech), of which there are just so few. Again, I understand that those asteroids are real, and that Phil literally put everything in the solar system on the map, but making a game that is so immensely hard to play can hardly be packaged as a competitive board game. This is a simulation, and as a simulation it’s really, really good. I would play this again in a heart beat, but I know that’ll be a struggle with the rest of the group.

It’s a rewarding experience once you get the hang of it, but this game is in dire need of a strategy hints guide or something along those lines. I think about Labyrinth: The War on Terror, a complex game by all measures, and in the rule book there’s a section that says “I wish to do X, how do I do it?”, “In what ways can I make Y happen?”. High Frontier needs this badly. It’s just too inaccessible for new players, or people who aren’t in the forefront of the aerospace world.

I really liked this game, I still want to learn and understand it more, but I know I’ll be doing this alone. In space. Where no one can hear me pull my hair out.