Saipan The Bloody Rock is a new war game just released by Compass Games that covers the invasion of the island of Saipan in the Marianas Island chain during June-July 1944 during World War II. This is the first game to utilize the new Company Scale System (CSS) developed by Adam Starkweather and comes with two 22″ x 34″ beautifully illustrated maps.

In our first play, in order to learn the system, we chose to play the Shattered Jewels scenario, which covers a single day of fighting and revolves around the largest Banzai attack of the war. Thousands of Japanese attack the 105th Regiment near the town of Tanapag. The scenario is of variable length but usually lasts 4-5 turns.

In this Action Point, I will take a look at Opportunity Fire into a Banzai attack. Opportunity Fire is triggered when a unit leaves a hex that is located in a fire zone of any enemy inactive units and is always optional. The Opportunity Fire is pretty simple and follows the same rules as regular Fire attacks. So, when the Japanese initiated a Banzai attack in this scenario (they are actually under what is called a Gyokusai or “death charge” and have to do Banzai) on the inactive American units, the Americans wanted to use Opportunity Fire at every opportunity so they could thin the numbers of the Japanese. Usually, a unit can only participate in one Opp Fire, after which they have a No Opportunity Fire marker placed on the stack. But, when they have an HMG support weapon equipped, units will be able to participate in multiple Opp Fire actions using what is called Sustained Fire. But if they roll a 7 or greater on such an Opp Fire, once the Fire is completed, that Support Weapon is considered broken and is placed in the reallocating box for later redeployment. 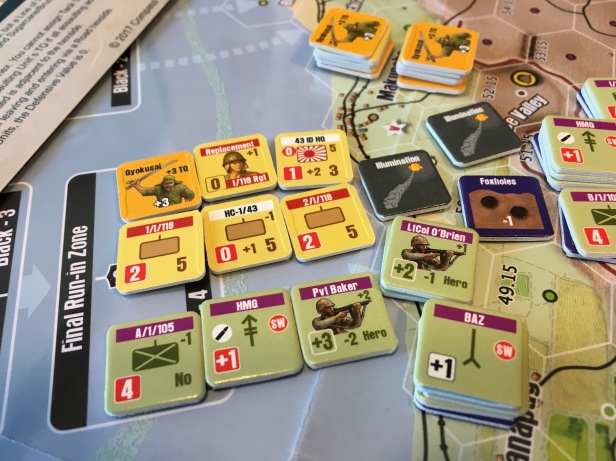 In the above picture, you can see that the Japanese attacked my units in a foxhole and as they approached I opened up with Opportunity Fire using an HMG support weapon giving me sustained Fire so I can perform Opp Fire at other charges in the same round. You simply add the totals of the red boxes in the lower left corner of the counters and modify it with various factors, such as terrain, counters and conditions.

My final attack power was a modified 13 and I rolled an 8, which was lower than the 13 which resulted in 4 DGs (Disorganizations). Due to the special rules associated with Gyokusai, DGs are ignored and instead the number is halved and results in unit eliminations instead. So with 4 DGs, this resulted in 2 Japanese unit eliminations.

This is important in a Banzai because the damage resulting from the assault is odds based, so I was eliminating units that would have given the resulting Banzai attack a possible positive modifier. But more on this in Action Point 2.