What do you get when you mix 8 geeks (said by a geek with respect) & baked beans after a 14 hour gaming marathon? ….a lot of fun!  This is Part II of my review of our group’s International Tabletop Day event, or what I like to call GENCON in our living room! (If you haven’t read Part I of my blog published on Thursday, May 5th check it out). Over the back half of the day we played the following great games:

So on to the summary of the rest of the day!

When Justin brought this game out I cringed! I had just enlisted my friends earlier in the day after we finished GMT Games Dominant Species in helping me move in two new couches that my wife had purchased and moved some other furniture around, even carrying a heavy old couch down from our loft. We were all sweaty and I was tired and had lost some of my strength as I had my hand on each piece of furniture. This is a dexterity type game where you have to “flick” little colored discs representing your race car through a twisty, curvy track that even has a jump!

At first I could see on everyone’s faces that they were thinking “What are we playing!?!” but by the the end they were saying “Why had we never played this before?!?”  The game took about 15 minutes for the six of us to negotiate the track. To win you simply have to complete 3 laps. But let me tell you the 3 laps are difficult. If you are not bumping into other cars and knocking them off the track (at which point you have to go back to where you were and your turn is done), you are having to glide over the ramp and hope that you hit the railing and slide to safety!  I heard lots of laughing, excitement and curses all in the same minute or so it took us to get through one round. By the end, Alexander (probably the least athletic of all of us) was in the lead by nearly a half lap. At this time, he decided to take it easy and try to coast! Well hanging on to win is more difficult than going after it as he struck at least three walls at a perfect angle to reflect right back and allowed the rest of us to catch up. But finally with a skillful final flick he flew over the finish line to claim victory. We were all overjoyed (not that he won) but that the fun adventure was over so we could move on to more strategic games. All in all, it was a fun 15 minute diversion.

Conclusion:  I give this game a 3/5 for its playability/mechanic, 3.5/5 for design and production as I thought the track was too difficult and had some flaws/uneven seems that caused issues and 2/5 for strategy for a total overall score of 9.5/15.  Definately a fun diversion but offers little more.

The Sheriff of Nottingham is a bluffing game that can be won by being completely (well at least mostly) honest! Honesty is definitely not the best policy in this game. You take the roles of humble merchants who are trying their hardest to ship goods into the city that Prince John is visiting, all the while trying to fool the Sheriff into not checking (or checking) into the contents of their bags as there might be other more valuable contraband goods contained therein.

Each player also gets several tries at being the Sheriff and trying to find contraband in players bags but be careful as if you open a bag to inspect its contents and it contains what was declared the Sheriff will have to pay the merchant for questioning his integrity. I have owned this game since it came out and we have played it nearly 12 times. Each time has been a blast and is very satisfying. I have only won once as I am an honest person and have trouble with bluffing, most of the time.

During this game I pulled off a huge bluff that paid me handsomely.  Alexander was the Sheriff and it was late in the game. Much bread had been shipped and it was a good that was becoming very scarce. I drew the Royal Summons card and also had 4 bread in my hand. I decided to go for it and claimed that I had 5 bread in my bag.

As I declared what I had he immediately thought I was lying and began to extort me saying I had contraband in the bag. I bluffed, himmed and hawed a little, but held firm that I was telling the truth. I even offered to pay him 3 gold not to look in my bag. He didn’t take my offer, looked and immediately knew he was had. He had to pay me 2 gold for each of the breads in my bag and then paid me 8 more for the Royal Summons. This was a huge win for me and made the game worth it, even though I was not going to win. The winner was Justin who only lied once and tried to smuggle in contraband and was caught. He was honest almost the entire game and won handily. So, maybe honesty is the best policy?!?

Conclusion: This is a great game that is a lot of fun yet has good mechanics and gameplay and takes skill and patience to win. I give this game a 4.5/5 for its playability/mechanic, 4/5 for design and production and 4.5/5 for strategy for a total overall score of 13/15. A game that I think belongs in every collection.

The game of Scoville consists of many different mechanics including a blind auction to determine player order, a planting phase, a harvest phase, and a fulfillment phase where you try to fulfill recipes with the different types of peppers. Each round, the players plant peppers in the fields and as the game progresses available opportunities for crossbreeding increase as more peppers are planted. When harvesting, players move their worker pawn through the fields, and whenever they move between two planted fields, they harvest peppers based on a chart.

You can see it is mostly based on the primary colors.  For example, if you  harvest between fields of red and yellow peppers, they crossbreed and harvest an orange pepper. Harvested peppers are then used to fulfill the town’s spicy recipes to satisfy their need for heat!

While this game has the potential to be awesome, I was blown away by the many mechanics and choices. By about half way through I began to figure it out but alas, it was too late to win as Justin made the hottest chili and won easily. I’d love to play again in order to better understand what it is that I am supposed to be doing but it was a lot for the first try.

Conclusion: I’ve been impressed with Tasty Minstrel Games and see greatness in this one but it was initially too much for me.  I like the planting and movement to harvest but didn’t pick it up fast enough. The peppers are awesome, especially the translucent ghost pepper, and I loved the flavor text of the recipes and their creative names. I give this game a 4/5 for its playability/mechanic, 5/5 for design and production and 4.5/5 for strategy for a total overall score of 13.5/15.

This game is owned by Tim and was on my list to buy until he picked it up. I would love to knock him over the head and take it but then I wouldn’t have anyone to play it with! I love this game. It is classified as a “bag builder” rather than a deck builder because you don’t use cards but collect workers in the form of discs and put them in a bag to draw them out each turn.

The discs are workers representing Knights, farmers, craftsmen, monks, builders and merchants that you use to take various actions such as build a trade house, move a wagon or ship to trade for goods, collect books to move up your knowledge improving a multiplier for end game scoring, recruiting monks to act as wild roles, etc. I love the theme and the art is amazing as it truly feels like antiquity.

I finally was able to win this time by focusing on the knowledge track moving it all the way to the top making that multiplier as high as it could be. This helped me to score 63 points at games end. I also love the challenge of trying to thin your bag out and dump poor performing workers in the late game. You can move them to the the Town and score points or collect coins for the end game. Great mechanic! 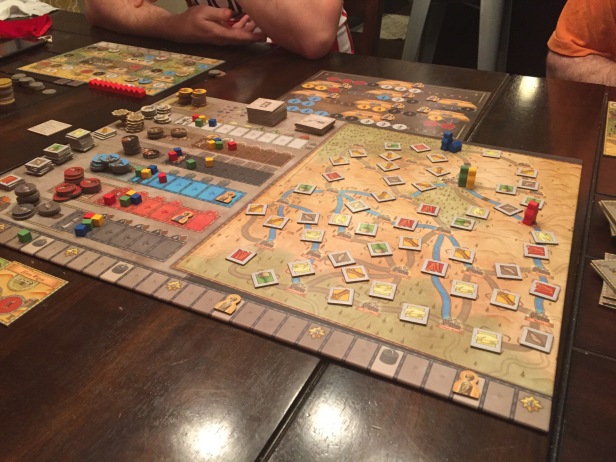 In the end, I was able to edge out Tim for the victory 131-130. An amazing game that appears to be very balanced as all the games I’ve played have been no more than a 10 point spread.

Conclusion: I love this game and feel that I can play it over and over and not get tired of it as there are multiple paths to victory.  I give this game a 5/5 for its playability/mechanic (I love the bag building), 5/5 for design and production and 5/5 for strategy for a total overall score of 15/15.  My only perfect game of the day!

So with 14 hours of games done I think our all day International Tabletop Day was a huge success!  We are all still married, still friendly and no one exploded from too much gastrointestinal distress….and the baked beans were awesome as was the time with friends and great board games! I definitely can’t wait until the next time we can do a gaming marathon.