Thanks for sticking with me over the past month as I have taken you through this series of Action Points explaining some of the actions available to the Patriot and British player in Revolution Road: From Boston to Concord from Compass Games.

In this final Action Point, we will take a look at the mechanics of combat, including the Attack, Assault and the very powerful Charge action for the British.

As you might have guessed the Attack action allows a player’s units located in one selected region to attack enemy units located in the same region. Not all of the eligible units in the region need Attack and a player can attack with a few units while they choose another action for the remaining units. As with most of the actions in the game, the units you have chosen to Attack cannot have already attacked during this activation round. At the end of the Attack action, the player will mark each unit that attacked or that returned fire in defense.

The Attack action does have a drawback though as the units being attacked have the option to retreat from combat before taking fire. If a retreat occurs, the attacking player’s units will not have to place a Fired marker in the units. I really enjoyed the optional retreat as the Patriot player. It was very thematic and really feels like your only chance in this early skirmish between your ragtag minuteman and Militia and the more powerful British Regulars. You see the Patriots were used to the backwoods fighting style that they had experienced as veterans of the French & Indian War. The British on the other hand fought in the disciplined style of European warfare and tended to march in nice tidy formations and fire in unison upon a command. Most of the British considered the Patriot way of fighting as cowardly, however it was definitely to the advantage of the less organized and disciplined Patriots.

In the game you can fire on retreating troops. You first count all the retreating units including both broken and healthy units and leaders. This number will determine how many dice are rolled to fire. Hits will be scored only on a 6 but can be devastating if successful. When this Op Fire is used, the firing player will have to place Fired markers on all units that participated.

The Assault action is for the most part the same as the Attack action with one minor difference. To initiate an Assault, the player simply has to have units in an adjacent region to their target and then move into the adjacent region to initiate an Attack action. Both of these type of attacks use the same procedure which we will now take a look at. 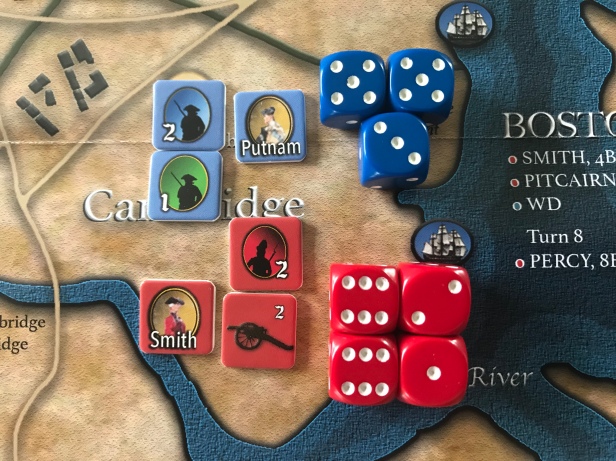 As previously mentioned, the player being attacked has the option to retreat. If after retreating, or choosing not to, any remaining units in the region will participate in the combat. The attacker then has a choice to make, namely whether they will chose Simultaneous Combat or face Defensive Fire.

With Simultaneous Combat, each player totals the strength points of their units participating and rolls that number of dice. Hits are totaled and each player will apply the hits scored against them. in the picture above you can see that the British player has four strength points while the Patriots only have three. The dice are rolled and the British hit on any roll of a 4-6 whole the Patriots will hit only on a roll of 5-6. In this battle, the British roll two hits with 6’s and the Patriots score two hits as well with 5’s. Any time the British Attack with the Field Cannon, they will automatically score an extra hit so in this case they will score three hits. 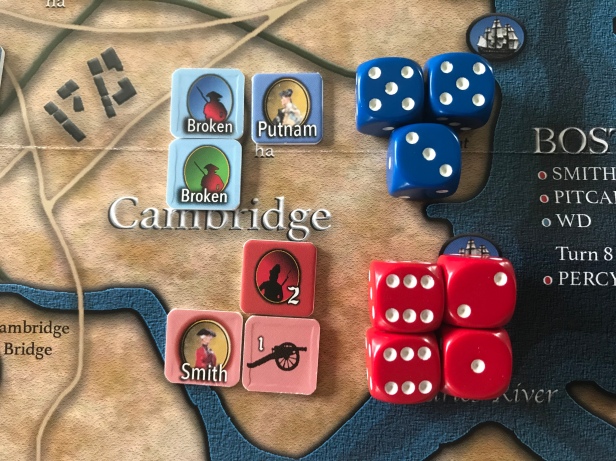 The hits are then applied to units. One hit requires the unit to flip to its broken side and you can apply hits to Leaders as well. If there are only broken units, hits may be applied to them by removing the counter from the game. You must remember though that removal of counters will score 1VP per for your enemy while broken units will only score 1/2VP. 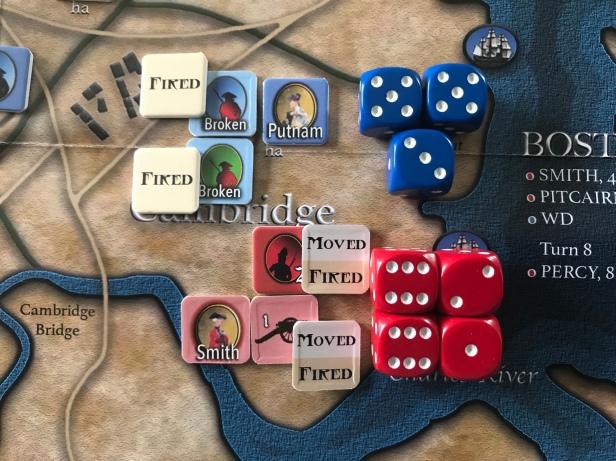 After the combat, players will place the appropriate Fired markers on their units to denote that they cannot fire again in this activation round.

The most powerful Attack action though is Charge and it can only be taken by the British player. The British player selects a region that must have a minimum of one British leader, at least one unbroken British Regular that doesn’t have a Moved or Fired marker, and any number of Patriot units. All British units that don’t have a Moved or Fired marker must participate in the Charge.

So what makes this action so powerful? Well, the Patriot player cannot choose to retreat and it doesn’t depend on dice rolls. 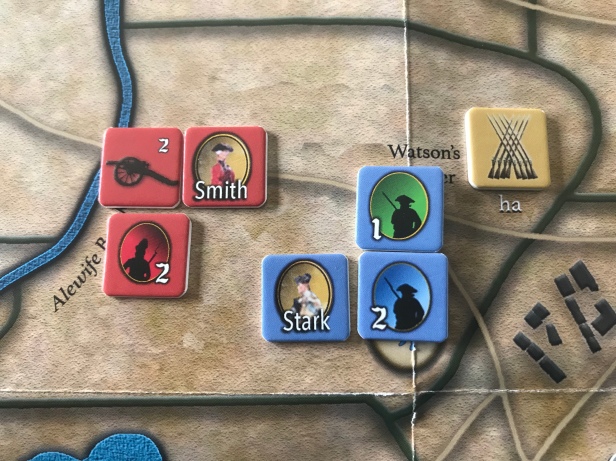 The British player simply has to apply one hit to one British unit involved in the Charge and then inflicts two hits on the Patriot player’s units. Once again if the Field Cannon is involved in the British Charge, there will be one additional hit applied. I know that the British player has to take a hit automatically, and when dice are required the Patriots only hit on a roll of 5-6 but the power of inflicting two hits (three of the Field Cannon is involved) is very nice. There also is an added bonus to the Charge. Forced retreat! 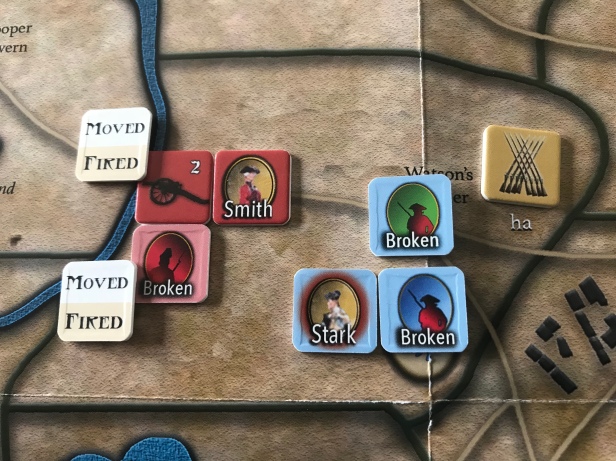 After the Charge is complete, the Patriots must retreat all units in the region that are broken. The Patriots may also optionally choose two leaders in the region to retreat as well. It’s never good to leave your leaders behind and unprotected. This forced retreat is really a good bonus as now it will make Searches easier in the region as there will be no reductions in uncovered hash marks from the presence of unbroken Patriot Militia or Minuteman. 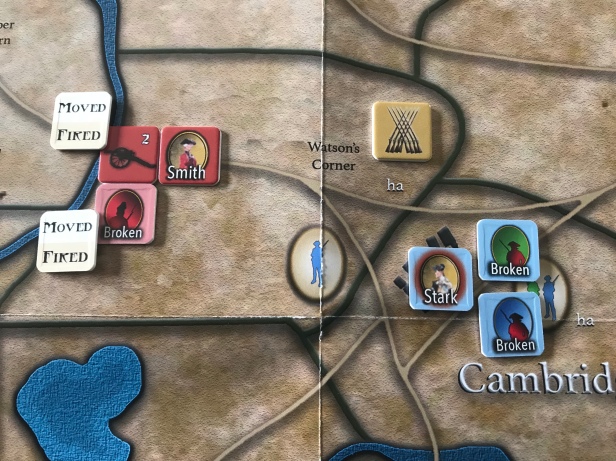 I really enjoyed playing Revolution Road: From Boston to Concord as there are many strategic options that both sides have at their disposal in their varied actions. Each turn, players must decide what is most important to accomplish with their limited actions and how those actions will each individually best assist them in reaching their end game goal. I am looking forward to trying out the second game included in the box Bunker Hill as it is more a traditional wargame than From Boston to Concord. Look for a written review soon.

In the meantime, you can check out our video review.

3 thoughts on “Revolution Road: From Boston to Concord from Compass Games – Action Point 4”