In our first Action Point in this series covering Hitler’s Reich: WW2 in Europe from GMT Games, we took a look at the basics of the Card Conquest system, the Event Card decks and the process of a player completing a Conflict Resolution for an Event Action.

Attack on a Sea Zone

Players can declare an Attack on one uncontrolled or enemy controlled Sea Zone anywhere on the map. The player doesn’t have to have an adjacent Area or Sea Zone under their control

In this example, Alexander’s Germans have decided to attack the uncontrolled Sea Zone located to the west of England and south of Ireland that contains a Production Center. Once he announces the Attack, and after he declared that he will use The Bismarck Event Card that will allow him to change one Axis die result to a 5, I declare that I will use my Enigma Event Card that forces him to reveal to me the Conquest Card that he will choose to play. He then reveals a Major-General Conquest Card that has a value of a 10. 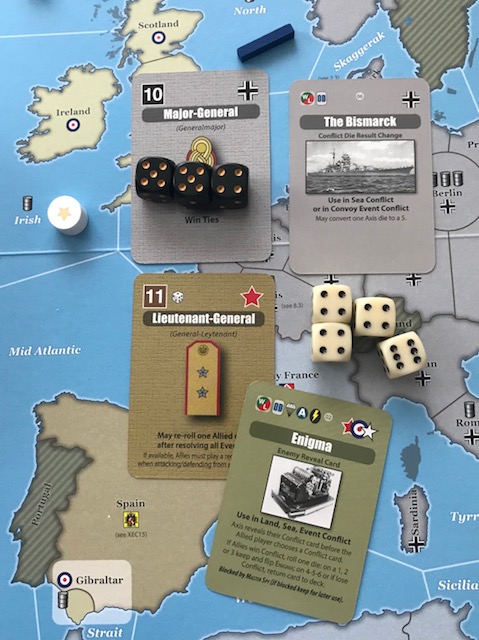 We then consult the Bonus Conflict Resolution Dice table found on the Player Aid to identify what if any bonus dice will be given to both sides. As you can see from the picture, neither side has control of the chosen area (where the white star cylinder has been placed) as their are no Control Markers placed and neither side has a Fleet present. I will gain one bonus die as I am the only player that controls one or more land areas adjacent to the Sea Zone so I will be rolling 4 dice to Alexander’s 3 dice. If we had a Fleet marker present, we would also gain an additional die but neither of us have Fleets here. With this space being important as it contains a Production Center and I want to make sure he doesn’t take it from me thereby reducing my hand size, I decide that I will play a Lieutenant-General Conquest Card with a value of 11 and also that grants me a re-roll ability for one die.

We roll the dice and Alexander rolls a 1, 5 and a 4, after adding in the 10 from his Conquest Card, he has a total Attack value of 19. At the same time, I roll 4, 4, 4 and 1 for a total Attack value of 24. I am currently winning but Alexander has a benefit from his chosen Event Card and changes one of his Axis die results to a 5. He chooses the 1 to make a 5 and his new score is a 24, which is a tie with my score. The German suit always wins ties so this will end in a tie and he will control the Sea Zone with a Production Center and cause me to lose a card in my hand. But wait! Not so fast as I also have an ability from my chosen Conquest Card in the form of one re-roll. I choose my 1 to re-roll and come up with a 6 changing my final Attack value to a 29, which is no longer a tie and I win the battle and am able to now place a blue Control Marker in the Sea Zone. We then discard our played cards, I have to roll for my Enigma Event and come up with a 2, which allows me to keep the Event Card but flip it to show that it has been used, and we each draw a card to replace the card we played.

One thing I would say about Sea Zone Attacks. Having a Fleet Marker and control of the most adjacent Land Areas will give you more dice to roll. More dice to roll means your chances of winning are increased. You must choose wise Attacks in this game as you only have so many resources (cards) and you must act quickly and efficiently to have any hope of accomplishing your Victory Conditions. Sometimes it is very important to use your low value Conquest Cards to build Fleets and Fortifications to give you an edge in future battles. Patience is important but you must make wise decisions. Good luck!

Attack on a Land Area

Now that we have seen an example of a Sea Zone Attack, lets take a look at Land Area Attack. In this example, Alexander has decided to launch Operation Barbarossa and bring the fighting to the Soviets to attempt to take away Allied Production Centers in Kharkov that will reduce the Allied Hand Size. But first, he needs to do some odds checking as we mentioned before. In an Attack on a Land Area, the player that controls the most adjacent Land Areas will be granted a bonus die and roll 4 dice to the other player’s 3. In this example, the best odds for an opening Attack for the Germans is Bessarabia as each side will only control 3 adjacent Land Areas and will not gain a bonus die. Adjacent to Bessarabia for the Soviets area Minsk, Kharkov and Crimea and adjacent for the Germans is Poland, Hungary and Romania. So, Alexander wisely chooses to Attack Bessarabia first and then places the white star Attack cylinder in that territory.

Because this is an important battle as it will even the odds for future Attacks if he controls Bessarabia, I decide to throw in my Reserves Event Card that will give me a bonus die to use in one land conflict. My Soviets will now have the dice advantage by adding a fourth dice to my roll. 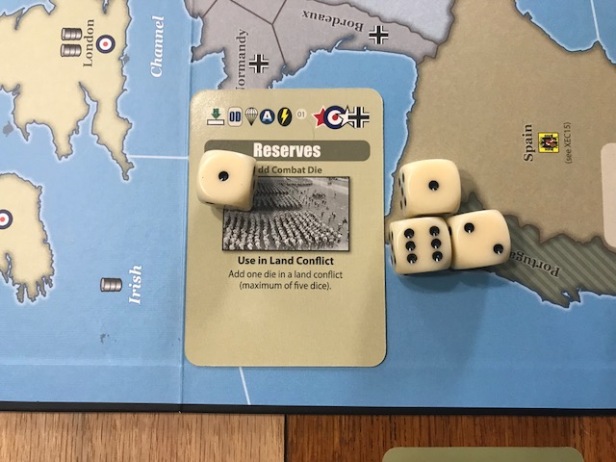 We then each secretly choose a Conquest Card to play and then simultaneously reveal them prior to rolling the dice. One interesting side note about the Allies. When you are making an Attack with or defending from a Soviet area, the Allies must play an available Red Star (Soviet) card. This can be trouble as you might only have low value Conquest Cards and really need to win a fight. The way around this is to quickly use those low value Soviet cards to build a Fleet or Fortification before doing an Attack.

We then roll our dice, remember that I am rolling 4 dice to his 3 as I played my Reserves Event Card, and I get a good score of 16 with a 6, 6, 3 and 1 while Alexander doesn’t roll well with a 2, 3 and 3 for a total of 8. At this point, I have a total value of 28 to his 19 and there is no need for me to re-roll and he can’t make up the difference in value with only one re-roll either so the Attack is decided as a failure. Normally, this would conclude this turn and it would revert to my turn because Alexander lost a battle but he is using the special Axis Big Push Available Action to do 4 consecutive Attacks to simulate Operation Barbarossa in 1941 no matter the result. But this victory in the first battle has ensured that his future Attacks will be made against the other adjacent Land Areas at even odds. Had he won this battle and controlled Bessarabia, he would have then chosen to attack Crimea at even odds (2 controlled Land Areas for the Germans [Romania and Bessarabia] to 2 controlled Land Ares for the Soviets [Kharkov and Ukraine]) and then concluding that battle most likely would have went for Minsk at a one die disadvantage (but maybe would have used one of his Event Cards such as General Rommel or General Guderian to gain an advantage) and then ended with an Attack on Kharkov if all went his way. It didn’t turn out that way though and due to the initial successful defense at Bessarabia changed the course of the outcome of Operation Barbarossa.

I hope that you have enjoyed my look inside the play mechanics for Hitler’s Reich: WW2 in Europe from GMT Games. This game is very interesting and offers a challenge to both sides. The game is interactive, fairly quick playing (advertised as World War 2 in 2 Hours! but we have found it will take 3 hours) and pretty interesting with the Card Conquest mechanics and the available Event Cards. We have played twice now and I am learning more about the game and how to best play it. Alexander is working on a written review and I want to play the solitaire mode soon and will plan to write a review of that experience.