In our final Action Point covering Fort Sumter: The Secession Crisis, 1860-61, we are going to take a look at the Final Crisis mechanics. The Final Crisis is a rather tricky proposition as you are attempting to plan for your last round at the beginning of the game. Why is this tricky you might ask? Well, you simply do not know how things are going to go over the first 3 rounds of the game and you are trying to predict what you will need to do at that time NOW.

As I have said previously in the various Action Points, players are dealt 4 Strategy cards plus 2 Objective cards each round. Players will play 3 of these cards during the round for either their value or for the event. The 4th card will be placed under the Final Crisis Cards section of the board and will be saved to use during the Final Crisis round.

At the end of any round where both Final Crisis zones have been breached on the Crisis Track or at the end of the third round of Strategy card play, players will then perform the Final Crisis. This Final Crisis will include the following actions: 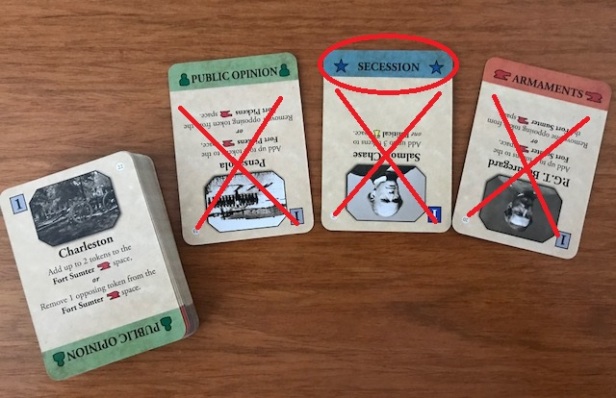 Pretty simple mechanically, but how to properly and strategically do it is a bit more difficult. In my humble opinion, you must be paying attention to what you are doing during your three rounds of Strategy card play, as well as look at how your position for control of Crisis Dimensions is in comparison to that of your opponent. Remember there are no Political activity cards in the Final Crisis as the political process has failed and no one is listening any longer. This doesn’t mean that the Political Crisis Dimension is unimportant, as it will still score again, but you will have less luck manipulating its tokens for your gain.

It is also very important to understand whether you are playing to protect a lead in VP or are behind and must be more aggressive. If you have a lead going into the Final Crisis, you should plan to play your Final Crisis Strategy cards to hold that lead by trying to almost anticipate what it is that your opponent is going to do and play your cards in the order you think they will as this will not allow them to gain ground on your lead. This is easier said than done though and can become somewhat of a crap shoot. In the picture to the left, during our 4th game, a Secessionist victory, I played my cards to try and anticipate what it was that he was doing. In this instance it worked for me and gave me a 1VP victory as I had the lead going into this Final Crisis round. It is also very important to have Political Capital Tokens in your pool that are available for placement on the map. As I have mentioned in earlier posts, making sure you are managing the Crisis Track and gaining as many of the bonus tokens as possible is very key here as if you have none in your pool, you will have to weaken your position on the board to manipulate tokens by moving them around rather than taking them from your pool.

The Final Crisis phase is difficult and for new players will seem random and absent the ability to proactively plan. This is not the case though and through experience, that only will come with multiple plays, players will soon realize that they can plan their cards out to make a difference in the end. You simply have to make up your mind which Crisis Dimensions you want to control and then plan for that to happen by setting aside that type of card.

I plan to write a more in-depth look at strategy for the game but will leave this post off with this comment. There is very little randomness in the game. Yes card draws are random, but you have the power to use your cards to your benefit. You just have to plan for it….easier said though than done.

Thanks for reading along in our series of Action Point posts for Fort Sumter: The Secession Crisis, 1860-61 from GMT Games. If you missed the pervious three posts in this

series here are links to them:

Action Point 1 – a look at the map spaces and makeup of a Crisis Dimension along with Strategy card play.

Action Point 2 – a look at the Crisis Track and how affects the game.

Action Point 3 – a look at the different ways to score VPs.

Look for an in-depth written review coming soon and also keep your eye out for my attempt at a strategy guide where I plan to break down the makeup of the Strategy card deck and show you who has what advantage and where, and also talk about some of the different types of cards that can be used and abused by players to accomplish your goals.