A few months ago, Brian Train asked me if we would be willing to play and give a few thoughts on the game play for Nights of Fire: Battle for Budapest from Mighty Boards, which is the follow-up effort to 2016’s breakout hit Days of Ire: Budapest 1956 from Cloud Island. Days was a game about the outset of the Hungarian revolution and its efforts to take back control of Budapest and totally eliminate Soviet influence. Nights is a follow-up to the revolutionaries success in part one, and this game starts as the Red Army arrives a few days later at the edge of the capital and pushes into the heart of the city; bent on retribution, destruction, and ruthless pursuit of control. For the players in charge of the Hungarian defense there is no time left for organizing and sedition. This is a hopeless war of survival, plain and simple.

The only hope that the resistance has is to fight hard enough, do enough damage to the 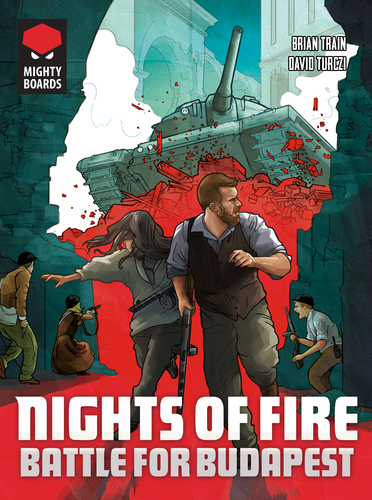 mighty Soviet tanks, that it might fan the flames of rebellion and lower the prestige of the Soviets in the eyes of the world. This game has a competitive mode as well as a cooperative mode and is a card driven game that is focused on the various choices that the resistance has to relocate civilians before they can be arrested, ambush and disable Soviet mechanized troops, remove garrisoned units from various sectors and build up defenses, such as the mighty sandbag barricades, to aid their efforts in slowing the Soviet advance. This game is not one in which there will be a happy ending for the resistance. It is setup to cast them as martyrs to incite continued resistance and comes down to the very end each game.

The Kickstarter campaign for Nights of Fire is scheduled to start today, February 21st. You can visit the Kickstarter page at the following link: https://www.kickstarter.com/projects/mightyboards/nights-of-fire-a-sequel-to-days-of-ire