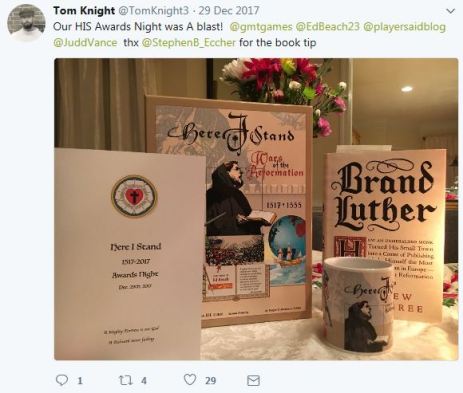 A few weeks ago, I was browsing my Twitter feed and saw this really interesting tweet that had been posted in which our blog was tagged. In this tweet, the writer Tom Knight, stated that “Our HIS Awards Night was a blast!”. I was intrigued to say the least and actually DMed Tom to ask what this picture was about. When he told me, I thought immediately that this was something that our readers would truly enjoy. We had actually played our first play of the 2-player variant for Here I Stand: Wars of the Reformation 500th Anniversary Edition the day after Christmas and I was beginning to work on some of our patented Action Points to talk about some of the finer points of that design and to give insight into the play experience, followed by a more thorough review later. So, I felt that this timing would be perfect to get the perspective of another self proclaimed GMT Games fan and asked Tom if he would consider writing a guest post on the blog. He agreed and I am pleased to share with you his experience.

I am not sure why I like history. It might have been from hearing stories from my mom about living on a farm during the Great Depression. Or perhaps was it from opening my grandfather’s sea chest from WWI and looking through his scrap book of his time on the USS Oklahoma? But most likely it was from my college freshman history class titled “Rise of the West.” This class was a prolonged discussion on the relationship of political and religious thought from Egypt to the end of the English Civil War. And one of the most interesting periods in this class for me was the Reformation.

So, when I stumbled across Ed Beach’s magisterial game Here I Stand: Wars of the Reformation from GMT Games, I knew I wanted to play this game. But, with whom and when, I was not sure. I bought the game, put it in a closet and waited. At the end of 2016, I suddenly realized that 2017 would mark the 500th anniversary of the symbolic beginning of the Reformation with Martin Luther’s public posting of his 95 theses in Wittenberg. I knew that it was now or never to take the plunge. So, I sent out an email in December of 2016 and presented my case to play to friends and family ranging in age from 12 to 59. It helped that they were all Baptists of some stripe, and interested in the Reformation. 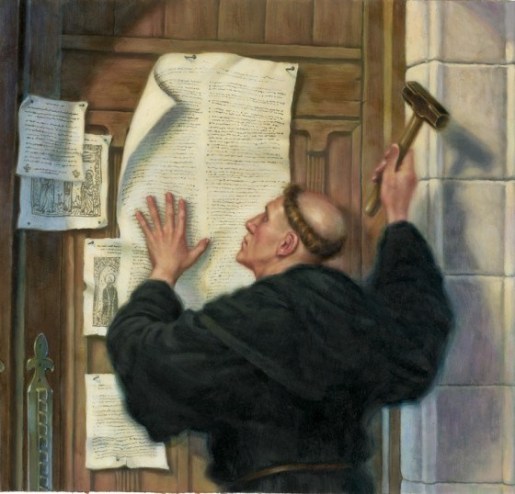 But we had a problem. Frankly, a pretty big problem! None of us had ever played this game, nor had we even met a person who had played this game. And when I use the word magisterial to describe this game, I am not just talking about its beauty, depth of play, and historical detail. I also use it to describe its rule book: all 42 pages of it. So, I proposed that we be hold several “training days” spread out over the coming months with an “official” game to be played in October of 2017 as close as possible to Oct. 31st. I was to play the English and the Protestants, my son would be the Ottomans, Jonathan would play France, Don would play the Hapsburgs, and Josh the Papacy.

And training days we needed. This was the most complex game any of us had ever played, and it showed. There is a lot to remember and not everyone even uses or cares about many of the rules. For instance, if you are the Ottoman player, you are not involved in the exploration of the New World nor the religious aspect of the game. Due to this fact, you may not be inclined to really know those rules. And when the Papacy and the Lutherans began arguing over rules, you could possibly start to lose interest in where this is all going. At moments, it was like herding cats. We made a lot of mistakes, redid turn one I don’t know how many times, but also had those precious “aha” moments as well. But at the end of the day, everyone agreed to keep pressing on and come back for another “training day.”

For our official game in October, we finally agreed, simply for time’s sake, that we would go with the 1532 scenario to simply shorten the game. Tragic but necessary. We were planning on a full day, and full it was. We started at 8:00am with a rise and shine breakfast, with the first moves being played at 8:30am. Unfortunately, we lost two of our players prior to the day. France took a job at an international school in Jordan, and my son was undone by an Algebra II and Latin II double barrage. We had also lost the Ottoman player. So, we shifted as best we could with Don now playing the Hapsburgs and the Papacy, Josh playing France and the Ottomans, and yours truly sticking with Henry and the Protestants.

We quickly realized that in a three-person game, one wields great power, and knows a lot more about what cards are in play than in a normal 5 or 6 player game. It makes for a faster game but a less rich one, especially in the diplomatic sphere. But we did what we had to do, and things finally started to click. Josh proved to be a more aggressive Ottoman player than my son, and kept Charles tied up for most of the game. Every Ottoman and Hapsburg impulse we huddled around the board and waited to see if Vienna would fall. However, the Hapsburgs never lost Vienna to the Turks, repeating Suleiman’s defeat at the gates of the city. But it came with a cost. Keeping the Ottomans at bay allowed for the Protestants to hold their German language territories and spread out. And here for sure was an advantage for Henry and the Reformers: the unchecked spreading of Protestantism is a win-win in a three-person game. Because one must average the score of his two factions, growth in Protestant spaces helps both players. In a six-person game, there comes a point where Henry may not want all of England to be Protestant. Not so in a three-person game. This was my only hope to win.

As the English, I was able to shore up my chances with an early six on Henry’s Pregnancy Chart. Edward VI was born healthy. I really did not know how to execute an invasion of France that could be effective, so I just gave up on that idea. And Henry had other problems too. After England attacked Scotland, France came to Scotland’s aid, and I was now surrounded. So, Henry stayed at home, told his spiritual advisors to publish treatises, and waited. Slowly, the spaces began to flip to that glorious white side across England.

Perhaps the finest work the Protestants did was getting one Protestant troop into Geneva so as to help Calvin spread the Good News into France. This is hard to do with so many Catholic troops marching around, but with the plus one modifier from the Protestant soldiers, Geneva jumpstarted a long line of white along the Franco-German border. It was enough to lift the average of the English and Protestants to win by being five points above the other factions’ averages. We had stopped for lunch and a few breaks for tea and cookies, but other than that had plowed straight through. We ended at 8:00pm, a full twelve hours after we had started. Luther lived to see the fruit of his efforts, and Bloody Mary never ascended to the throne of England. 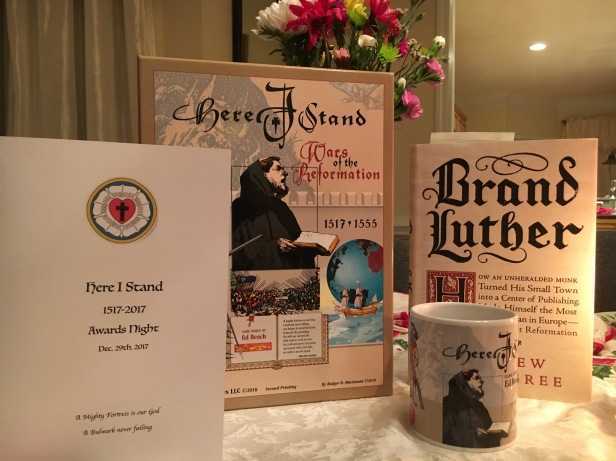 It was a great game, and my friends had put in huge amounts of time into this gaming experience. Though we had previously played some lighter games like Star Wars Miniatures, Commands and Colors: Ancients, and Axis & Allies, we had never attempted to tackle anything like this. After this experience, I thought the players needed a reward.  So, I organized an “awards night” to celebrate the almost year-long march to be able to finish a game of Here I Stand. We scheduled it for Friday, Dec. 29th. This was to be a celebration of the Reformation anniversary, Christmas, the game, and perhaps most importantly, the game widows who sent their men off to war, not knowing when they would return from my house.

For the awards, I decided to get each participant a HIS coffee cup, a certificate acknowledging participation in the event, and a copy of Brand Luther, a book recommended to me by Reformation historian Dr. Stephen Eccher. My wife and daughter worked on name cards and flowers for the table, while I printed out “commemorative programs” for the evening. 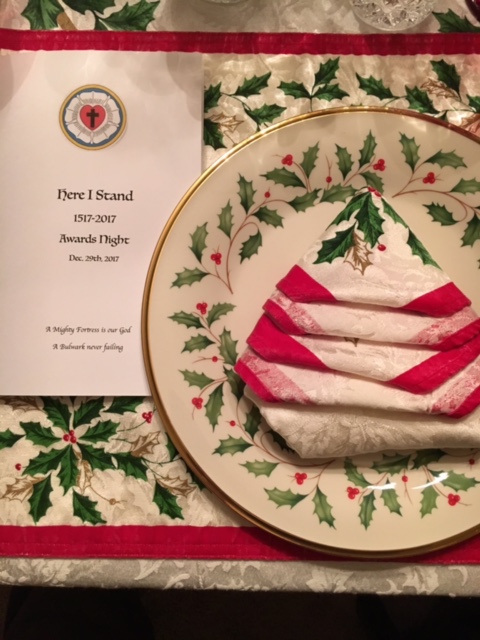 We started off with a huge Christmas feast and then moved on to our program. I sketched the life of Luther stressing the role of the printing press using Brand Luther as a lens to see the Reformation world. Next, I went through a short version of how our game unfolded, weaving in facts from the history of the period. After the history of Luther and our game, we went on to the music section of the program. Though most of the songs were Christmas songs, we started off with “A Mighty Fortress is our God,” Luther’s most famous song. Living not far from the Moravian town of Salem, North Carolina, (now Winston-Salem) I made sure we finished the night with large portions of Moravian sugar cake.

Though our awards night was a synthesis celebrating the life of Martin Luther and its ramifications and the HIS game, it was also a celebration of tackling a difficult game and sticking with it even when we had no experience in playing it. Everyone gave up something to help pull it off, even family members who were not actually playing the game. Acknowledgement of these sacrifices called for something more than just “that was fun.” I hope my experience will inspire you to try new games a bit out of your reach, and to acknowledge those who journey with you.

If you are interested in reading more about the Reformation period you should first start by actually reading the historical notes in the HIS scenario book. They are a great snapshot of the interesting people who pop up in the game.  Next, I would suggest Roland Baiton’s classic book on Luther Here I Stand.  Make sure to find a large edition so you can see all those wonderful woodcuts in detail.  I also thought Brand Luther was a great twist on the era by looking at the relationship of Luther with his printers.  Finally, John Julius Norwich has recently come out with a great little book called Four Princes dealing with the four great rulers during Luther’s life.

Tom’s first encounter with war games was tossing Lincoln logs at tiny soldiers his cousin ordered from the back of a comic book. His first real game was Alexander by Avalon Hill (1971). He has taught English in China, been a campus minister, and is now a collegiate ministry consultant. He enjoys Chinese Chess (Xiangqi), Commands and Colors: Ancients, and Shogun (1986), to name a few. He also enjoys reading, which both enriches and limits his gaming experience.

“Feelings come and feelings go,
And feelings are deceiving;
My warrant is the Word of God–
Naught else is worth believing.

Though all my heart should feel condemned

For want of some sweet token,
There is One greater than my heart
Whose Word cannot be broken.

I’ll trust in God’s unchanging Word
Till soul and body sever,
For, though all things shall pass away,
HIS WORD SHALL STAND FOREVER!”
― Martin Luther

7 thoughts on “Guest Post: Here I Stand Awards Night – A Study in Preparation for a Magisterial Game by Tom Knight”