Theme. The basis for the setting and feeling of any board game. But, is it always necessary? Does theme make or break a game for you? What are you willing to sacrifice in game play in the name of theme? I want to talk about theme as I see a lot of people discussing it in board game forums and I have my own strong feelings about it. Whether a game has a theme or not, whether that theme is good and whether it is integrated well. It seems to be really important to most gamers, but how important is it? 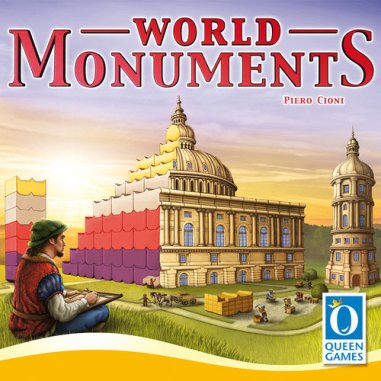 I love a good theme. If a game has a hint of the theme it is trying to portray in it’s gameplay, then I am a happy man. But some games actually demand that the theme is present. I can play an abstract game and not necessarily worry about the theme. A game that comes to mind that I absolutely loved but felt had very little theme was World Monuments from Queen Games. In this game, you are trying to build various famous world monuments, such as the Sphinx, the Notre Dame cathedral or the Taj Mahal mausoleum, using different colored blocks. You have to be concerned with two things as you play. The placement of your blocks and how that placement either helps your future turns or those of your opponents and the color of the block which determines the scoring value. That is it. There really isn’t much theme to speak of in the game and that is mainly a product of the style of game, being an abstract. Theme is not necessary in a good abstract. But, in a game that is trying to portray the complex social, cultural and even traditions of a certain country or people, then the theme is absolutely vital to the game.

As an example of what I am trying to say in regards to theme, in a recent game of Fire in the Lake: Insurgency in Vietnam from GMT Games, I was able to play the event “Tribesmen” that allowed me to remove any 4 Insurgent pieces total from spaces with Irregulars.

This event allowed me to remove 2 underground Viet Cong guerilla units in the highland province of Binh Dinh and the lowland province of Quang Tin. Usually, this action would have taken me several turns, one turn to sweep into the area uncovering the guerilla units making them vulnerable to assault and the next turn to carry out the assault operation to remove the pieces. So this event was very powerful and allowed me to get done in 1 turn what would have taken me several. This event, in the confines of the theme of the game, was a great vehicle to insert into the historical narrative of the game the various nuanced methods that the US used to fight the VC. You see, in the history of the Vietnam War, the US spent a lot of time and resources training and winning over the hearts and minds of the indigenous people known as the Montagnards. This event card is the method by which the design allows for various elements of theme to be inserted into the gameplay.

In the name of theme, the designers of the game didn’t want it to be that easy for the US player, as historically it wasn’t, and many attempts such as this failed. With this thought in mind, and in an attempt to integrate the theme into the gameplay, there is a counter to these type of cards that is built right into the range of actions that the VC player can take. The counter move to this event though was the VC using their Rally operation to bring in more guerilla units on their next turn, which ended up netting them 1 additional unit in each of the provinces over what they started with (started with 3 hidden guerilla units in Binh Dinh and after my event and their rally, ended with 4! Started with 4 hidden guerilla units in Quang Tin and after my event and their rally, ended with 5!). Fantastic! I loved the feeling that it gave me of frustration and disgust but also loved that the game design is very flexible and allows for punches and counter punches! The game accounts for theme and makes these type of struggles very thematic and also very fun.

The theme is also very much integrated into each of the four playable factions so that you actually feel the goals of the faction in their play style and victory conditions. The ARVN is trying to garner funds from the US in the form of Patronage and ride their coat tails into battle as they really don’t have the units to wage full on war, while the VC are trying to build opposition to the US presence and build their tunneled bases to protect their troops and recruit more soldiers while the NVA are concerned with protecting and building the Ho Chi Minh Trail and building bases in order to control certain areas. When I play a game about the Vietnam War, I definitely want to experience the challenges and complex issues that plagued that war and Fire in the Lake does a great job of that with the theme.

About the only aspect of Theme that I dislike is that it may dictate too heavily game play. In my experience, most eurogamers (and I am including myself in this group as I play a lot of euros) simply want to sit back and think about the most efficient way to navigate the game framework presented before them and to decipher the key to victory. This is almost like solving a complex puzzle. Players want to look at the mechanics, their advantages and disadvantages, and then make a conscious decision to take the actions that fit their preferred strategy and then do that over, and over…..and OVER! I fit in this category and love Stefan Feld designs for this very reason.

Most don’t want to be distracted by an elaborate theme that involves a lot of moving parts, fancy and shiny components (wood is good enough for me! I don’t need fancy minis.), or requires actions to be taken that just seemed to be added to the game in order to create more complexity or to establish a theme. They most importantly don’t want to have to deal with their feelings about a theme as they are simply thinking “how do I get the most VPs!”.  An example of a game I can think of is Anachrony from Mindclash Games.

For those that don’t know, Anachrony is a really cool and highly thematic worker placement game. It takes great pride in it’s theme and the game is way overproduced, even containing these huge Exosuit miniatures that serve no real purpose but to immerse you in the theme of your chosen philosophy. It is the 26th century and Earth is recovering from a devastating explosion that is creating havoc with the atmosphere of the planet. You are a leader of one of the four Paths that the Capital has trust in to save humanity.  Your goal is to prove to the Capital that your Path’s strategy is the new way to inhabit and ensure Human survival on Earth from this time forth. The problem is that there is an asteroid headed to earth that resembles the same explosion that occurred centuries ago. Gather Resources, travel in time and evacuate the capital before it’s too late.  If you succeed, your Path may just save the Human Race from extinction. 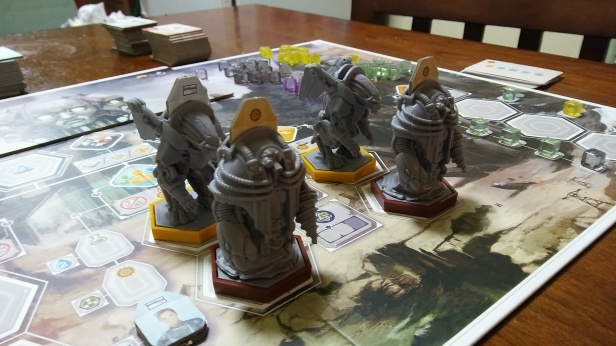 Now that you have a feel for the game, I will tell you what I really hated about the theme. Other than the overproduced miniatures, that I could frankly take or leave, I really hated the time travel mechanic, which is called the Warp Phase. In this phase you can borrow resources, workers, and Exosuits from the future. Sounds really cool, right? You each secretly choose how many resources, workers or Exosuits you want to obtain and reveal your tokens placing them on the spots available to take those items. This is when the Paradox will be effected. You need to fulfill this “loan” and pay it off in the future by traveling back in time to the era you used. If not, each one you still own at the end of the game will cost you -2 points. I felt that this element was simply tacked on to make the game more Sci-Fi like! Maybe I am wrong, but it felt unnecessary and was simply added to appeal to a certain demographic that would buy the game for the time travel reason alone. I felt that the game was worse off for doing this and could have simply ignored this element to simplify the game and make it more enjoyable. More theme, or more thematic actions, don’t always reinforce the theme but sometimes take away from the main focus of that theme.

Theme is generally seen as only useful when it makes for a pretty picture! You see, most eurogamers only care about the rules and the mechanics. They ask questions like “How do I win?”, “How does this little ‘doohicky’ here help me to get VPs?”, and most importantly, “How do I stop my opponents from winning?”. It is all about the mechanics! Also, I have even witnessed members of my own group simply ignore the theme, and call every piece of currency a dollar (Matt!). They will especially trash the theme if there is a means to more easily remember the rules or how to win by referring to parts as money, or bank, or trash, etc. Don’t get me wrong. We as a group love theme, and often talk about it in our discussion and videos (see the infamous Feast for Odin review where Alexander and I got into it over the theme.)

So, what are your thoughts on Theme? Do you need a theme or is it just window dressing? Does it affect your enjoyment level? Or do you simply look at the mechnics and ignore the fluff? Let us know as we really want to hear your thoughts.