In 878: Vikings – Invasions of England, players control either the invading Vikings or the English Nobles who are trying to withstand the invasion and protect their lands. Viking players have the choice of playing one of two clans; either the Norsemen Viking freeman or as the fearless Viking shock troops known as Berserkers. The English also play as either the Housecarl, the Kings’ household troops, or as the Thegns who were regional Noble Leaders. The English players will also be able to call up the peasant levies, called the Fyrd, to defend their cities. Who plays what faction is decided by the number of players. When only 2 players are involved, one player will play both factions for the English or both for the Vikings. When playing with 3 players, one side will play both sides of a single faction and the other two will split the remaining factions. The rule to remember is that all four factions have to be present in any game.

Players for each side can strategize together in order to coordinate their strategies. Table talk is acceptable and recommended. Each side is trying to control City spaces on the map to win. The English start the game controlling all of England but a Viking Leader will invade from the sea each Turn. The English players raise reinforcements from cities they control, while the Vikings must wait for a new invasion for reinforcements. The game ends when the Treaty of Wedmore is called and the side controlling the most cities wins the game.

In this Action Point, we are going to take a look at the cards that help to drive the action. 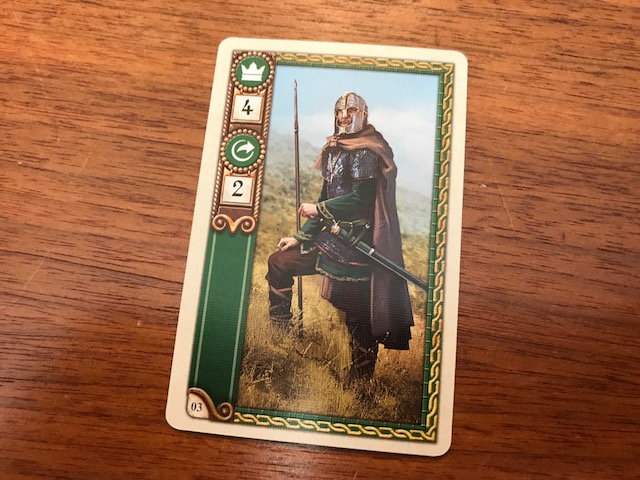 First up are the Movement cards. Each turn, each player will fill their hands back to three Faction cards. Among these three cards, a player must have at least one Movement card or Treaty card or they will be asked to shuffle their hand back into their draw deck and redraw three new cards. As you can see from the card pictured above, they are pretty simple. The card shown is a Thegn card, which is one of the English factions. The important information contained on this card are the two different symbols (a crown and an arrow) along with the numeric value shown below those symbols. Everything else is just for show, and I will say that I really love the art chosen for these cards. Very thematic.

The crown symbol denotes the number of different armies that may be activated during this turn after this Movement card is played. In this example, you will notice that 4 armies can be activated. So you might be asking what makes up an army? Good question. As this card is a Thegn Faction card, and can only be played on the turn of the Thegn player, an army is defined as any number of units contained in a single Shire that contain at least one of the corresponding active Factions’ color. If a group of 6 Housecarl units are grouped together in a Shire with only 1 Thegn unit, this army can be activated and controlled by the Thegn player on their turn. If the Thegn unit was not in that Shire, the Thegn player couldn’t activate that army.

In the picture below, you will notice that the Viking army is located in between two different armies, one on their left flank consisting of 6 Housecarl (blue) units and 1 Theng unit and on their right flank consisting of 2 Housecarl units and 2 Thegn units. The Thegn player could play our example card, which grants the ability to move 4 armies to move both of the multi-faction armies.

The second important part of the cards are the spaces or Shires that are allowed to be moved with those armies chosen. This number is shown under the movement symbol and on our example card is 2 Shires or spaces. In the end, the example card simply tells the Thegn players that they can move 4 Armies up to 2 Shires. I say up to, because you don’t have to move the exact movement or even activate all four of the armies. It is your choice but use this card wisely as it is generally a very good card that offers a lot of flexibility. 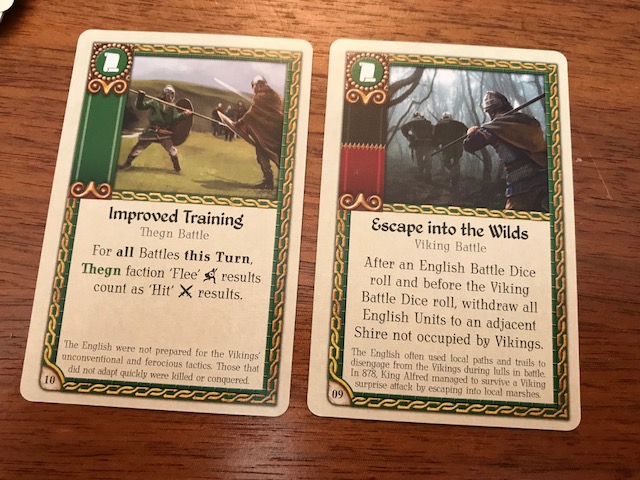 I really enjoyed the addition of the Action cards, until that is, that one was used against me to snatch my victory from the jaws of defeat or however the saying goes. The Action cards are used by the player to either play on their turn or on their enemies’ turn. In the picture above, I have examples of 2 cards that I will discuss in a little more detail:

Improved Training – can be played during a Thegn Battle and reads “For all Battles this Turn, Thegn faction Flee results count as Hit results“. This card can be played during the Thegn Battle phase and is quite powerful. One of the things that I haven’t talked much about is the dice and their makeup. The dice are different for each faction and have drastically different results as you can see from the graphic below. The Thegn units are a bit of a mixed bag as far as combat results as you can see they have 2 Hit results (crossed swords), 2 Command results, which simply means you can choose to move a unit to an adjacent Shire that you have units located in (horn) and 2 Flee results. With those results, you only have a 33% chance of hitting as compared to the 66% chance of a Hit with the Berserker dice (ridiculous) and a 50% chance of a Hit with the Norsemen. With the play of the Improved Training cards, all of a sudden your Thegn units are now hitting as if they are Berserkers, which is very good. 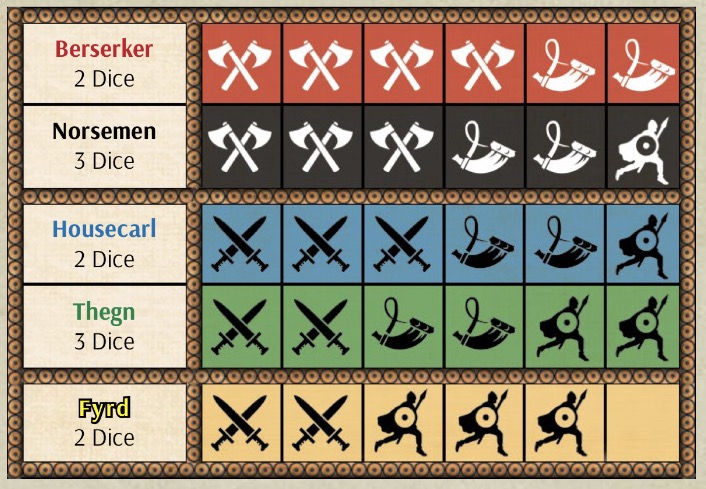 Escape into the Wilds – can be played by the Thegn player during any Viking Battle and reads “After an English Battle Dice rolls and before a Viking Battle Dice roll, withdraw all English units to an adjacent Shire not occupied by Vikings“. I really liked this card and used it to my advantage to do some damage before I retreated into the woods. I really like it because when attacked, and after you get to pull a Fyrd card to add units to your battle, you get to roll your dice, inflict damage results on the Vikings and then just end the Battle and run away. I actually had thoughts of saying “Run away” in my best British accent!

I mentioned earlier that while I liked the Action cards, I also had a concern with them. I will say this. The cards are great and really add an element of surprise and uncertainty to any battle…but, some of them seem to be a bit too powerful. I can’t remember the name of the card but it was used against me to eliminate an entire English army that I had built up to slow down the Viking advance near the end of the game. My opponents literally played the card, and just like that, removed by vast army from the board, without losing a single unit. Ouch! Also, later in the same game, my opponent used a card to turn my brave English knights traitor in a very remote and difficult to access area of the board, which gave them control of the required 9th city for victory. Those are my only thoughts on the cards. Seemed to be a bit overpowered in some instances.

I hope this Action Point gave you good insight into the mechanics and uses for the cards included in 878: Vikings – The Invasions of England from Academy Games. The game is well designed, plays very fast for what it is and is a very enjoyable experience, even when you lose. In our next Action Point, we will take a look at how Battle works.