September’s Eagles is a racing game from High Flying Dice Games. Unlike many racing games, however, this one takes place in the skies! The designer, Paul Rohrbaugh, sat down and answered our questions about the game – whose contents you can see in this video. The game, in all it’s golden age glory, is available from the HFD website.

Alexander: Paul, before we get started, how about an introduction for our readers. Who is Paul Rohrbaugh, and what do you like to do when you’re not swamped with designing games and running High Flying Dice Games?

Paul: I’m a soon-to-be retired teacher and librarian (finishing up my last term at Youngstown State University in December). When I’m not doing game work I’m researching and writing articles in history, as well as a book on local steel magnate, philanthropist and friend of President McKinley, Joseph G. Butler. My wife and I also enjoy going to concerts and operas in Pittsburgh, taking in plays, and traveling. I’ve also long been into classic cars, and some of my spare time is spent in maintaining and showing off a 1973 Chevy Vega Notchback. All of the Vegas were built in nearby Lordstown, and my first new car was a 1974 Vega. I’ve restored many old cars over the years, but this one I’m very proud of.

Alexander: Have there been any other designers out there that have inspired your work? If so who and why?

Paul: John Hill is a big inspiration. I literally “came of age” with gaming when he first published Squad Leader and Conflict magazine. His ability to portray history in game form really captured, and kept, my attention. One of my biggest regrets was not to have met him personally before he passed.

Alexander: Where does the title ‘September’s Eagles’ come from? What significance does it hold to the golden age of Air Racing?

Paul: The National Air Races were always held during the Labor Day holiday. These were the ultimate aeronautical events of their day. Until the Super Bowl, the Thompson Trophy Air Races, that were the climactic event of “The Nationals” was the largest outdoor spectator event in history. They were fantastic spectacles that inspired a generation. I am still amazed that such an important historical event was held for the most part in nearby Cleveland, and that so few remember it today.

Alexander: High Flying Dice Games puts out a lot of wargames, but September’s Eagles is a break from this tradition. What prompted you to design a game, not only about civilian racing, but in the unique genre of propeller plane racing in the 1930’s?

Paul: September’s Eagles was one of the first games I designed. We started play testing it in 1983 with students who stayed after school when I began teaching. I have used games throughout my career (even to this day at the University level). I am very interested in local, as well as military, history. September’s Eagles is a very good example of how I feel games can be used for life-long learning, as well as for entertainment. 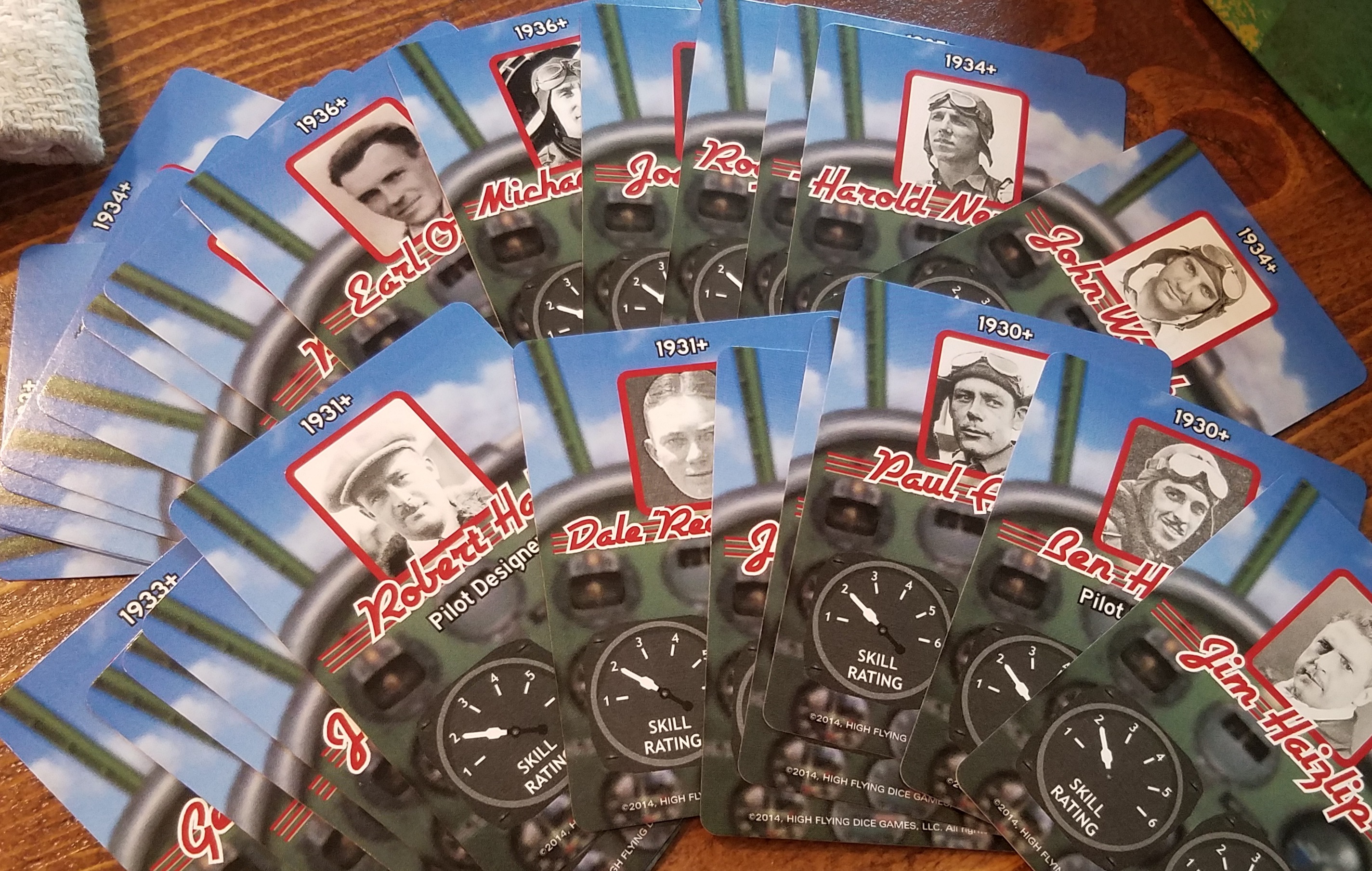 Alexander: There’s a significant amount of planes in the box. Can you run us through some of the research that went into each of these planes and where we could turn to learn a little more for ourselves?

Paul: You are correct, the game is the product of years of research, design and play testing. There are many sources, text as well as online (as you can tell from the game’s bibliography), that were consulted. I’m also very lucky that the Western Reserve Historical Society, whose archives/collection, contains a vast amount of resources pertaining to “The Nationals”, is so close to where I live. I think one of the first impressions anyone has when they first open the game’s box is how much history is packed into the game.

Alexander: What set’s September’s Eagles apart from the other racing games out there on the market?

Paul: The game is meant to be easy to learn and fun to play first and foremost. I enjoy playing card games with friends and family, and integrating aspects of these types of familiar games into September’s Eagles was a key conceptual design element. If you can play 500, Rummy or Gin you can easily play September’s Eagles.

Alexander: Are there different race courses for each year? How do each of these differentiate from each other?

Paul: Each race from 1929 to 1939 is a scenario in the game. The course of each race is marked out by pylon markers (shown in each race’s set up). Each race has the four historical planes that finished in those positions, or came close to it, as well as “The Pack” that represents all of the other aircraft. “The Pack” was another key design aspect of the game, as it not only compels each player to race against all of the historical pilots, but also makes solitaire play possible (which is important for many gamers). Not very many race games I’ve seen have this as part of the design unless you have many, many players (and excluding solo play completely). 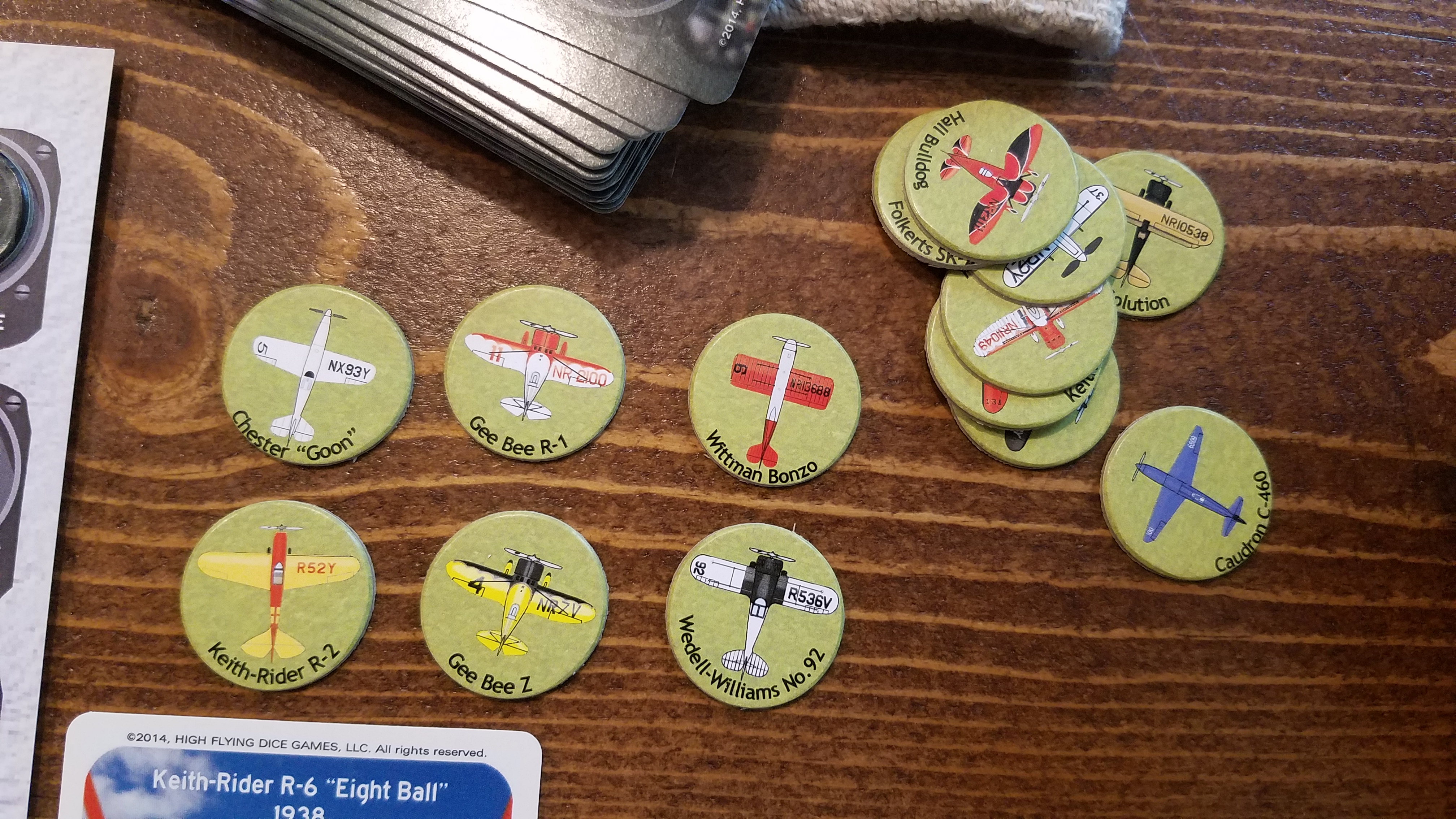 Alexander: Which aspect of the game’s design are you most proud of that we can experience when playing?

Paul: That is a tough question. It is almost akin to asking a parent which of their children is their favorite!😉 I am very proud of how the game makes this almost forgotten era of history very “approachable/teachable”, as well as fun to play.

Alexander: Is there anything you had to drop or cut out of the design due to play test feedback or difficulty modelling in-game?

Paul: We went with a “conversational” style of rules presentation as opposed to a numbered and more “conventional” rules style that most wargamers are familiar with. That is how I originally wrote the rules, and as we broadened the play tester pool the negative feedback about the “legalistic” rules was significant. I think the style they wanted was more akin to the old Milton Bradley games of the late 50s, 60s and 70s, and that is what we went with. 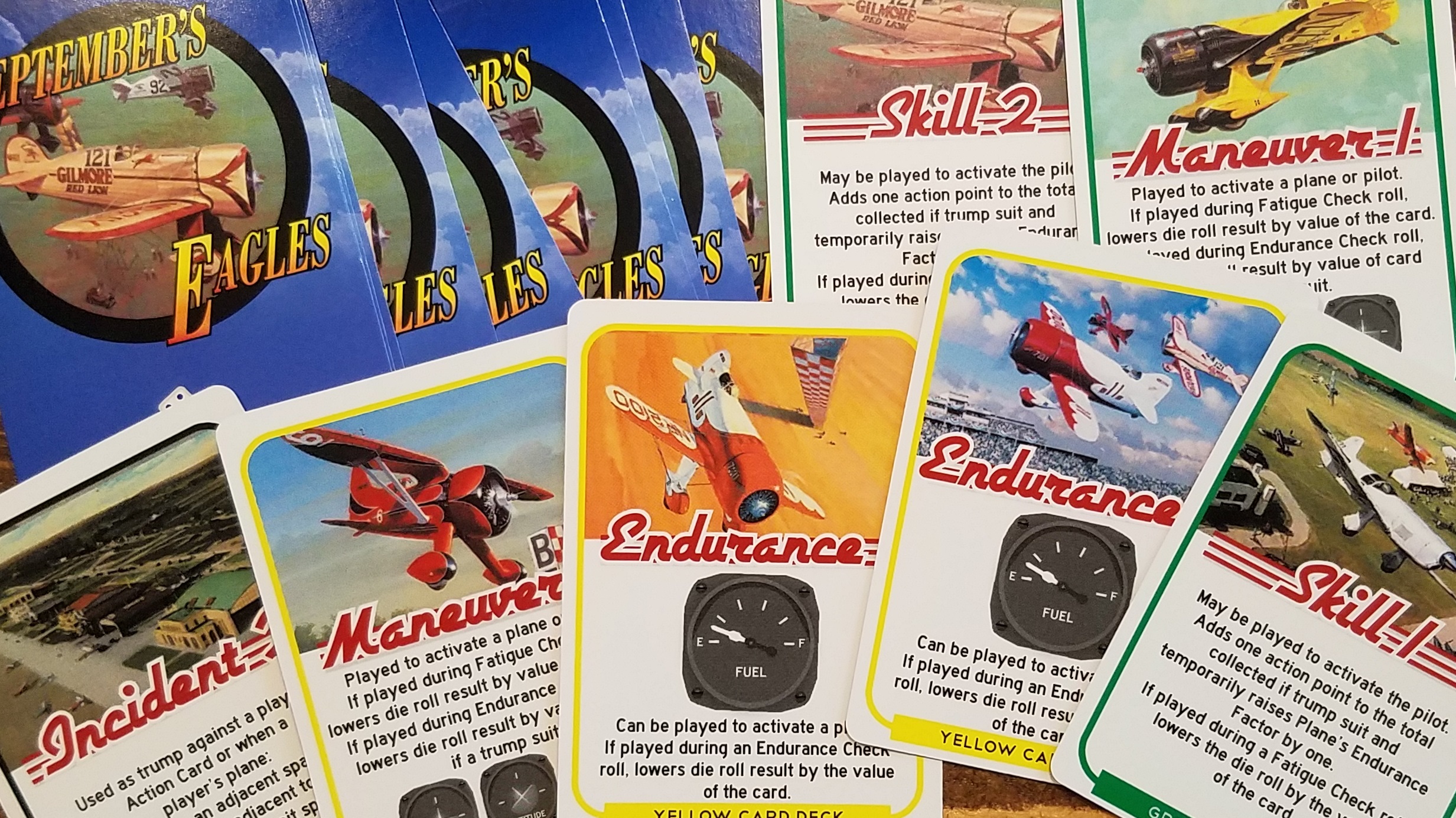 Alexander: How does the game model the intricacies of flight racing including altitude, speed, acceleration?

Paul: The game’s design is meant to be simple, so speed and altitude are abstracted. That said, the historical capabilities of the planes and pilots are represented in the various factors on the air units and pilot cards, as well as special rules unique to each race. The card play simulates the pilot’s abilities and airframe’s strength, while things such as card trumping simulate close-in, high speed maneuvers, “jinking” and risk taking. Black “Incident” cards introduce elements of luck and happenstance that in these races could result in dramatic races as well as tragic accidents. These were all part of the unlimited, no-holds-barred, Thompson Trophy race.

Alexander: September’s Eagles has been in the works for a long time, and the finished product is something to behold. How do you feel about the artwork and what was it like working with the artist?

Paul: Bruce did a fantastic job with the game’s graphics. He loved the game when he first saw it, and showed it off to everyone he could during the years he worked on it. It is great when someone with such great artistic talent not only enjoys his work, but the game as well. Bruce’s graphics really do reinforce the game’s history as well as game play. I could not be more proud of what he did. 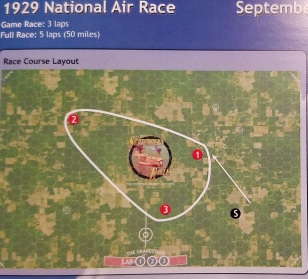 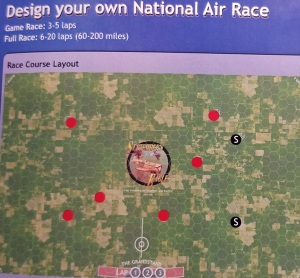 Alexander: What other games are you working on that we can look forward to seeing in the future?

Paul: We have many new wargames in the works by me as well as other designers, in a wide variety of eras and topics. I very much enjoy presenting topics in history that have received little-to-no attention in game format. That is what I think most of us at High Flying Dice Games particularly enjoy doing.

Another non-wargame in the works is Wheels of Change: The US Auto Industry of the 1950s. In this game players take on the roles of the small auto producers (Studebaker, Packard, Willys, Nash, Hudson, Kaiser-Frazer, and with the variant, Tucker). The game’s rules and card play cover the actions of the larger economy and Big Three (Ford, GM, Chrysler/Dodge/Plymouth/DeSoto). As I said above, I’m into old cars, and this game captures that interest and history in game form. It is also another topic in history that no one, as far as I know, has portrayed in game form before. It is another challenge I very much enjoy. 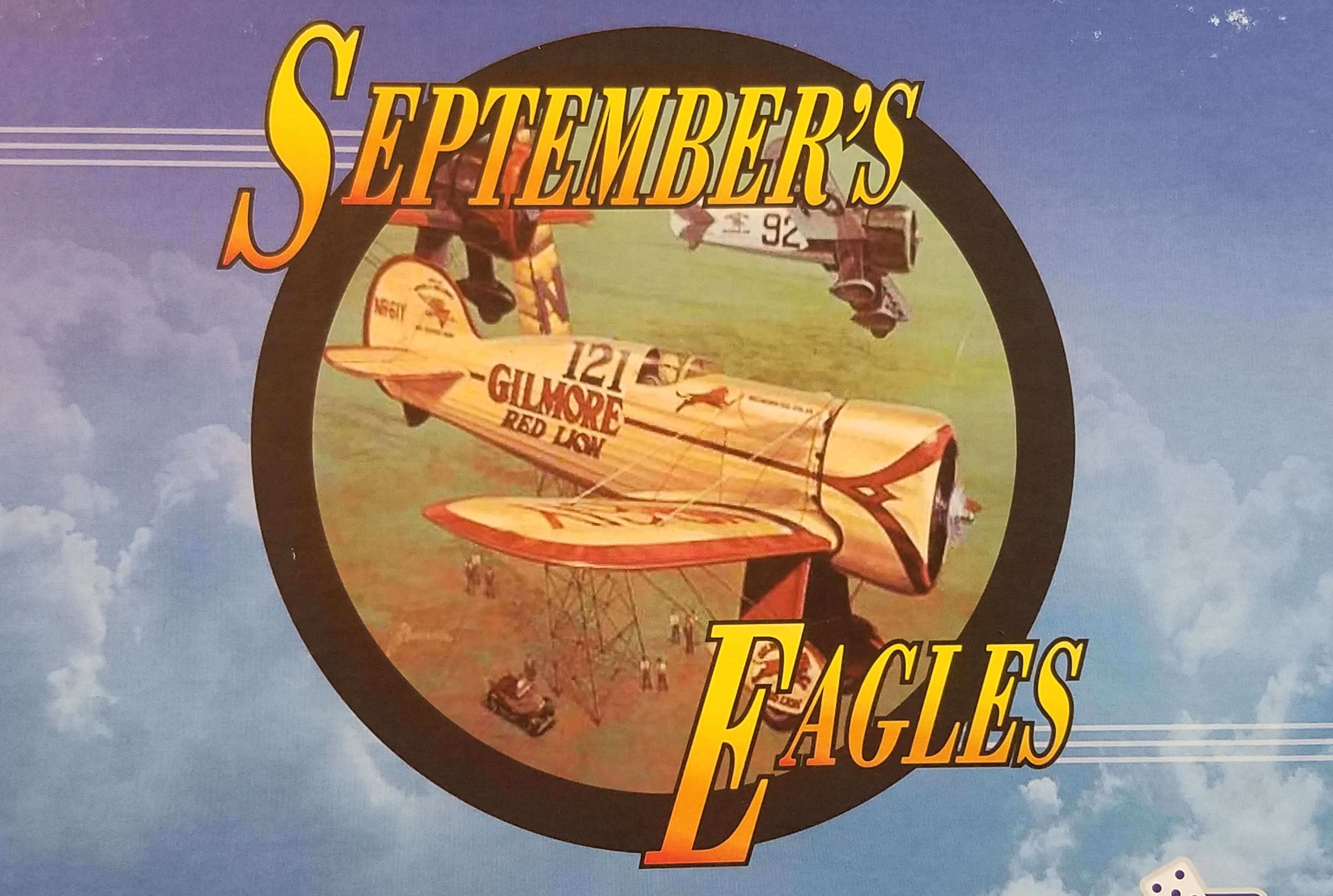 Thanks Paul for the insights and look inside September’s Eagle’s – watch out for a review of this fast and furious game coming soon!