The Wild West. A romantic period of our history where the way of the gun ruled and those that could handle one, had free reign. A setting that has been used in many board games, some better than others, but definitely one that gives great inspiration and opportunity to be the basis for a good playable game. Cowboys are the quintessential heroes of the Wild West and can serve many a useful purpose, either as ranch hands, cattle drivers, outlaws, prospectors, members of a good old fashioned lynch party and of course, as gunfighters. I have played many games that incorporate Cowboys into their theme, but feel these games I highlight in this list do it the best. With that, let’s check out my Best 3 Games with…Cowboys! 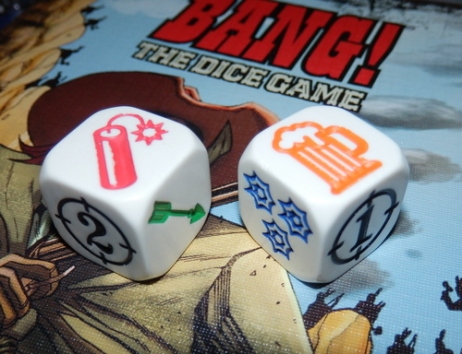 This game is definitely a little different than the others appearing on this list, as it is more of a filler or party game. BANG! The Dice Game is a variant of the popular BANG! but, as implied in the title, uses dice. At the start of the game, players each take a role card that secretly places them on one of several teams, including the Sheriff and his trusty Deputies out to get the law breakers, the dastardly Outlaws trying to kill the Sheriff, and the lone Renegades, who just want to be the last man standing.

The players also are given a character card which grants a special power to be used during the game. The Sheriff is the only player that has to reveal his role card while the other players keep their roles a secret. This is very important, as once you find out who is aligned with whom, it makes the game easier and a lot less tense. The real fun is in guessing who is who and there is nothing better than accidentally shooting one of your teammates. The game is simple and on a player’s turn, they will get the chance to roll the five chunky dice up to three times, using the results of the dice to take various actions, such as shooting neighboring players, or increasing the reach of their guns by using higher numbers to shoot players across the table, heal his (or anyone else’s) life points, or put him in range of the Indians, which are represented by nine tokens in the center of the table. Each time a player rolls an arrow, he takes one of these arrow tokens and places it in front of them; when the final token is taken, each player loses one life point for each token they hold, then the tokens are returned to the center of the table. When your life points, represented by bullets, are exhausted, you die and are eliminated from the game, leaving your teammates to fight on alone without you. Whoever meets their victory condition first, will win in the end.

The game is a great deal of fun and plays very quickly with games lasting about 10 minutes or so. I love the unique abilities of each of the cards. These abilities include very thematic characters such as Calamity Janet, who has the ability to switch numbered dice faces for higher or lower numbers, Willy The Kid, who can activate the very powerful Gatling Gun with less bullet symbols, etc. A great use of the Wild West theme and Cowboys in a fun and fast playing game.

In Great Western Trail, designed by Alexander Pfister, players take on the role of a rancher who repeatedly herds your varied types of cattle from the Great State of Texas to Kansas City, where you ship them off to parts unknown across the United States by train to supply butchers with great, high quality meat to sell to their patrons. This earns you money and victory points. Needless to say, each time you arrive in Kansas City, you want to have your most valuable cattle in tow and have a variety of different types to catch the interest of the buyers. However, the travel along the “Great Western Trail” can be treacherous and full of dangers such as drought, falling rocks and flooded rivers. This will require special attention to not only keep your herd in good shape, but also to take advantage of the various buildings located along the trail. Also, because you cannot do everything yourself it is a good idea to hire capable staff to take care of the many duties you are responsible for, including Cowboys to improve your herd, craftsmen to build your very own buildings that only you can use and engineers for the all important railroad line.

The Cowboys are used to be able to buy the better breeds of cattle that will end up earning more money and points at the end of the line in Kansas City and allow for you to be able to ship them along the rail line to further locations gaining more victory points. The more Cowboy workers that you have hired, the more access to better breeds you will have. If you don’t focus on Cowboys, there are other ways to win the game, but cattle are key to getting money to even be able to realistically work on the other strategies such as building better buildings. Overall, I really liked the way Cowboys were used in the design and loved the deckbuilding aspect of the game. There even is a way to get rid of your weaker breeds, which is very cool and important for any game that has deckbuilding. Plus those are some really cool looking Cowboy meeples!

My all time favorite game with Cowboys is Carson City, which is a strategic worker placement game played in four rounds, and in each one of those rounds, the players choose a character from among the seven (or more if you have the expansions) available that gives certain advantages and powers. These characters include such chaps as The Gunslinger (who gives you more firepower for duels), The Coolie (who gives you extra roads to be built) or The Sheriff (who gives you a more powerful invincible meeple to place).

After selecting characters, your Cowboy meeples are placed on action space locations along a track at the top of the board that allow you to take various actions such a constructing buildings, houses, or roads, stake a claim to a particular piece of ground, earn money, or simply score victory points. One of the best parts of the game, and which helps the game earn the number one spot on this list, is when more than one player has placed their Cowboy meeples on the same location. The only way to solve a difference of opinion in the Wild West is with a gun duel! Players will then roll the dice, adding in any bonuses from various characters or certain buildings, and see if they are the last one standing and then lay claim to that spot, kicking the other player’s Cowboy meeple to the curb.

During the game, you can take various actions that simply earn victory points for various items, such as the number of plots you have staked a claim to, the number of guns you have at your disposal (the hired help), and buildings. At the end of the game, your buildings, houses, mountains, and money contribute to your victory points, and the person with the most points wins. I love Carson City and have enjoyed the game each time that we have played. The Cowboy meeples are very well done (except I have had a few of the hats break) and I love the variable player powers granted by the different characters as there are many strategies that can be chosen to get rich and win the game. In my humble opinion, the best of the best in the Wild West themed board games that focus on Cowboys!

With these Best 3 posts, it can be very difficult to choose just three games for the chosen topic that day. There are many other Cowboy themed games that I have enjoyed immensely and honorable mentions could be given to Saloon Tycoon from Van Ryder Games and Hangtown from Jonathan Pac Cantin Games among others. Let me know what games you think are better at integrating Cowboys into gameplay than the three that I chose.