As was mentioned in Action Point 1, the creation of long and productive Supply Lines and Supply centers is critical for victory in Supply Lines of the American Revolution. Without the needed Food Supply (green cubes) to maneuver and march troops into position to initiate battle, and then the needed War Supply (natural cubes) to prosecute those battles, the game cannot be won. In our first play of the game, I played the Patriots and was able, through proper maneuver and through the cutting off of Supply to certain larger cities, namely Boston, to create a well oiled Supply Line not only from Baltimore in the south but also from Boston to the east. This Supply Line provide me with the needed resources to build up a sizeable force to effectuate a proper attack on Fort Ticonderoga and eliminate the British threat from that direction. 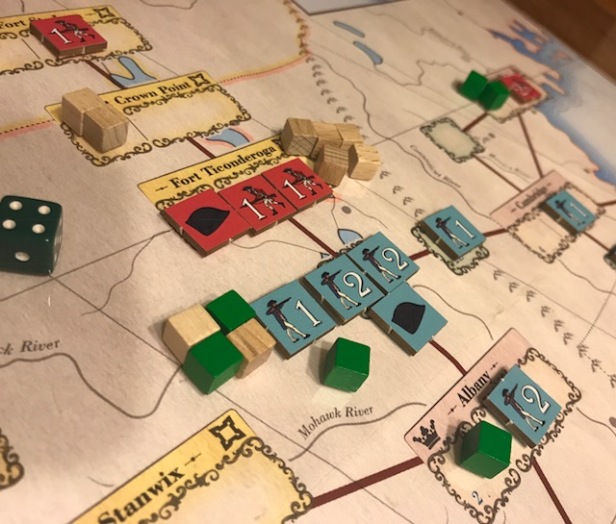 In order to Attack, the Attacker must have a Leader present (notice my Leader counter represented by the blue tri-corne). The Attacker must also spend Food Supply cubes in order to initiate an Attack. This will require 1 cube per 4 units activated so in this case, I had to spend 2 Food Supply cubes to move all 5 of my Army counters into the battle. You might ask, why did I spend that extra Food Supply and what advantage did it give me? Well, in battles in Supply Lines of the American Revolution, you win by simply counting the number of surviving units plus Leaders after a battle. So, in this case, I am simply trying to maximize the number of units I have versus those of my enemy so I can guarantee a victory. As you will notice, I am attacking with 6 units (5 Army counters plus my Leader) and the British have only 3 units (2 Army counters plus a Leader). I can win, if I simply don’t lose more than 2 units.

So, during battle, players determine the number of battle dice they roll based on the number of War Supply they spend. In this case, this battle was a little bit risky for the Patriots. I only have 2 War Supply cubes and as I am attacking a fort, I have to spend 2 cubes to roll one die. But, the British have 5 War Supply cubes and as such can spend all of them to roll 5 dice and hit my units on a roll of 1-3, while I only hit on a roll of 1 or 2. I decided the risk was worth it to end this threat and attacked even though the odds were slightly against me. My opponent rolled his five dice and luckily for me, hit only three times, while I rolled and hit one time. So, the final victory was determined by counting my total units, 6 – 3 loss = 3 units, to the British who had 3 – 1 loss = 2 units. But, there is another step that we must follow with battle, the Morale roll!

The Morale roll has to be made and the target number is determined by the difference in the number of units/Leaders in the two armies. In this case, the number to meet or exceed for the British Morale roll was a 1 (calculated by taking 3 Patriot units – 2 British units = 1). Also, if the British are making the Morale check, they have to only succeed once but the Patriots must succeed twice. In this instance, the British player rolled a 5 and was successful and didn’t retreat.

From the battle, the Patriots achieved victory and as such were able to move the Support marker on the Patriot Support Track one space, which now placed the marker in the Declaration of Independence area, which means it cannot go lower than that from the Patriots losing battles. As you can see, the goal of the Patriots is to either hold the British out of a certain number of Victory Cities (in this case it was 3) or win by reaching the Treaty of Alliance space on the track (colored blue) to earn an immediate victory. 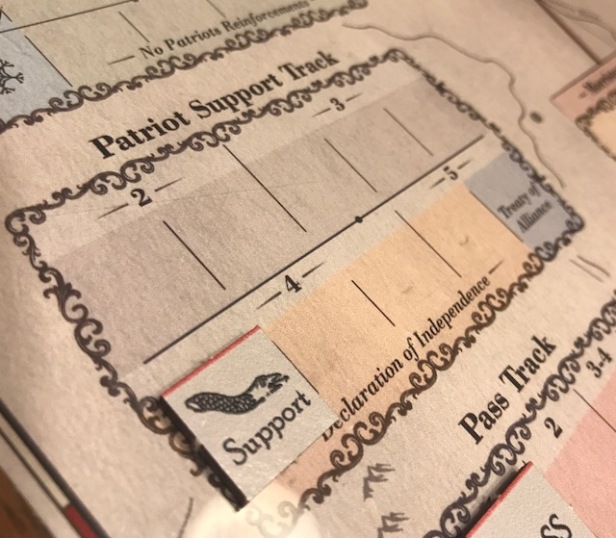 With this result, I next won a few other minor battles which brought me back for the final confrontation at Fort Ticonderoga. With the following Supply pictured below, I was able to again attack the fort, and by using 2 War Supply cubes roll a battle die while the British couldn’t roll one because they had no War Supply. I was able to roll a 2 and defeat the lone leader thereby, eliminating him and moving the Support marker the two final spaces into the Treaty of Alliance box and obtain victory. 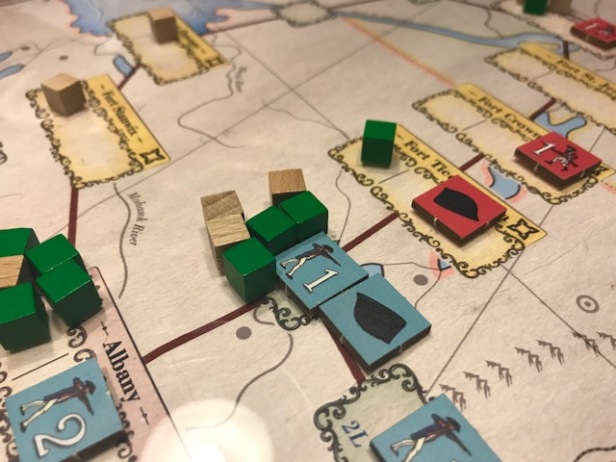 What a great little game! We enjoyed out first play thoroughly and cannot wait to play again, now with an even better understanding of the rules and the strategies needed to be successful. Look for a review of the game over the next few weeks.

4 thoughts on “Supply Lines of the American Revolution: The Northern Theater, 1775-1777 from Hollandspiele – Action Point 2”