In this Action Point, we will take a look at one of the actions that are available for the FLN player as they go about their business of trying to win independence from French rule to establish their own country in Colonial Twilight: The French-Algerian War, 1954-62 from GMT Games.

First up, lets take a look at one of the most basic yet versatile of all actions, the Rally Op.

During our first play, I was the FLN and after battling over the control of Souk Ahras, Tebessa and Philippeville located on or near to the border with Tunisia to the east, I decided to change tactics and switch my focus to the areas around Algiers, specifically in Orleansville. My hope was to establish a large presence there, place a few Bases to help me get nearer to my victory conditions and then begin to spread out into the surrounding areas.

When you take the Rally Op, you have to pay one resource per space that you are trying to Rally in (that space can have Support but you cannot Rally in a City that has Support). The Op allows you to place 1 Guerilla or replace two existing Guerilla units in that space with a Base. So, in Orleansville, it took me several rounds to be able to get enough units to begin Rally and to eventually place two Bases. Once Bases are placed, Rally becomes more effective as you can place new units up to the total of Population plus Bases in that region. So, in Orleansville, once I had 2 Bases placed, I was able to Rally 4 new Guerillas each round.

I then continued to Rally in that space until I had enough Guerilla units to protect the bases from Government Sweeps and Assaults as well as to begin moving outward through the use of the March Op. In the picture above, I used the March Op to move 2 Guerilla units south to begin building up in Tiaret and Ain Oussera. Why did I move 2? Well, I wanted to be able to switch the 2 out for a Base as soon as possible to increase my Rally output. 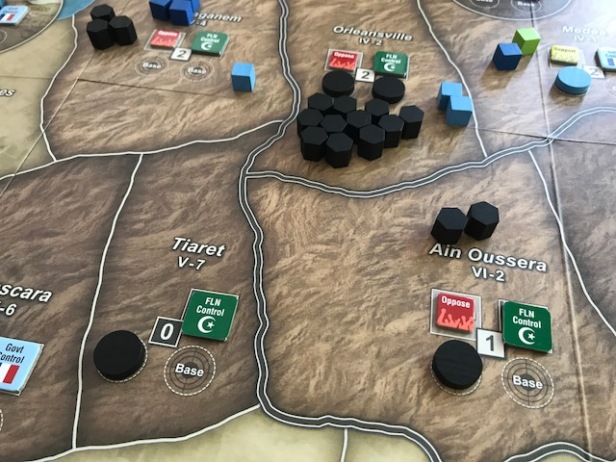 In the above picture, you can see that I switched out my Guerilla units in both of those areas for Bases and then began to continue my Rally efforts in Ain Oussera as I could place up to 2 Guerilla with each Rally Op (remember, Population of 1 + Number of Bases or 1 = 2 Guerilla units). You can also see in the upper left of the picture that I had started to wiggle my way into Mostaganem as well using the same tactics.

Near the end of the game, I was able to establish two strongholds in that area in Orleansville and Mostaganem and more importantly, these 4 bases allowed me to win the game with a final FLN score of -11 to Alexander’s Government score of -12 (as my victory condition is the number of Bases + total Opposition). I was able to continually withstand his Sweep and Assaults as I would simply do a Rally after he would Sweep to cover back up by Guerilla units and send them underground. Remember, the Rally Op, while very basic, has 3 distinct uses, including adding new Guerilla units, replacing Guerilla units with Bases and covering up your Guerilla units, and you will have to focus on each to be victorious with the undermanned and outclassed FLN.

In our next Action Point (which will post this Saturday, September 23rd), we will examine the Pivotal Event cards and how they are devastating to your opposition.

Here is a link to Action Point 1 where we took a look at the new 2-player Initiative Track and how it works. Genius! Here also is a link to the InsideGMT Blog where designer Brian Train talks about the menu of Operations and Special Activities in greater detail: http://www.insidegmt.com/?p=13712