MBT (Main Battle Tank) is a tactical wargame that utilizes the Panzer system to simulate armoured, air-arm, and combined arms operations in a hypothetical shooting war on German soil in 1987. The Cold War, which is always a fascinating topic for me, turns white hot in MBT as USSR and Nato forces deploy the latest in battlefield technology and modern equipment in open warfare. I, as did many others, read Harold Coyle’s Team Yankee as a young teenager, and the tension, lethality and visceral nature of the war he portrayed in that novel left a lasting impression. When I discovered GMT was putting out a new iteration of MBT, I was very, very curious to see how such a conflict would play out in a game.

Let me open this by saying I’ve never played any of the Panzer series. I hear they’re great, I just haven’t gotten around to it. So this was my first introduction to that system. I know it’s not exactly the same game but the geomorphic maps use exactly the same terrain and design and are fully compatible. I’ve played a number of tactical games that had combined arms with armoured units and leg units; ’65, Old School Tactical, amongst others. MBT however seems to be a game that was much more focused on the armour, which gave a very different feel from a tactical standpoint.

There’s something about tanks charging around a battle field firing their guns that brings to mind the true destructive powers being levied during war time. MBT is a game that jumps right on that and tries to give you an experience that conveys how quickly tides in a battle can turn, as well as how costly a shooting war can be in terms of human life and resources. After just the first 3 or 4 rounds in MBT the battlefield was littered with flaming hulks that used to be Abrams and T-72 tanks. In the base game you’re trying to take and hold objectives, or kill enemy units, and I actually had a hard time taking a step back and really understanding what it was MBT was trying to do.

I’m someone who normally plays tactical games in a very cautious, methodical manner. I would always prefer to painstakingly organize optimum fire resolutions than be all gung-ho about things. I can’t speak to why that is necessarily, other than that’s who I am. That’s part of the reason I enjoy tactical games with Grant, because I know that he’s always much more aggressive than myself and it’s fascinating to see play styles other than my own. 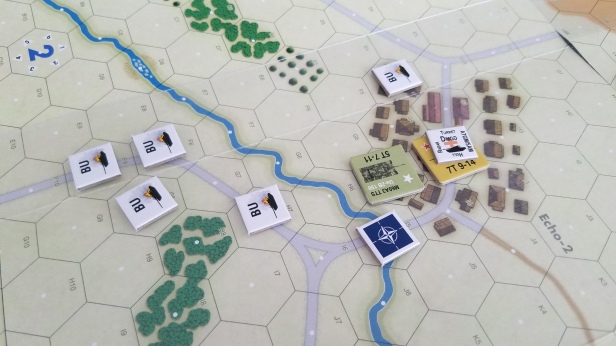 After playing a round or two of MBT it was fairly obvious that my normal way of thinking would not translate as well into this game. The movement and flanking is so important in this one that I thought I’d be able to kind of potter around behind trees and hills like I normally do. The ranges on the guns however mean that almost everything is in range for someone! After leaving some burned up tanks in my wake I realized that I’d have to be much more aggressive and proactive in taking out the enemy. Sitting in a tree line trying to pick off enemy tanks provides very little cover for return fire. I found myself barreling out of forests and rolling down slopes to engage in combat instead of being a sitting duck.

Being hit by a 125mm shell isn’t something many tanks can survive. The advanced game has a lot more rules based on where the tank is hit, if they have any reactive armour, etc. As far as the base game goes though, each ammunition type has a penetration value that is fixed. If you score a hit then damage is done based on how much the penetration value exceeds the opponents fixed armour value. What that translates to is that almost anything  within a range of 15 or fewer hexes is lethal. We had one, maybe two hits that resulted in just damage. Everything else was a one hit wreck.

Again, this was something that I had to wrap my mind around; because from a mechanical standpoint it felt like the tanks were very squishy. But the reality of the situation again goes back to having a cannon with that much firepower being leveled at a target at such relative close range. Nothing can withstand that kind of firepower so close up. Everything in this game reverts back to maneuvering and positioning however. If you’re playing the base game then your units have a fixed field of fire. If you can get your guns on theirs then you’re golden. If you’re both pointing at each other then it’s basically a crap shoot based on who wins the initiative dice roll, that then allows the winner to resolve all of their fire commands first.

MBT is a tactical level game. Each counter is a single vehicle or air craft or team of men. If you look at the Vehicle Reference Card alone you’ll see how much detail the game can contain. If you play just the base game, you really only use a few of the values printed, so don’t be too scared at first impressions. The game warrants playing the advanced game however. Anyone can play a move and shoot game, but to really appreciate all the research and design that went into MBT you’ll want to spend time sitting down with the advanced rules and getting to grips with everything this game has to offer – which is far more than just moving and shooting.

I’ve never before had to consider not only which weapon I use, but which type of ammunition I choose to load the weapon with. You’ll spend time agonizing over the best possible options, do you go for a higher to hit value, or risk a lower percentage shot with a better penetration value? So much to think about. The best part about MBT is that the game has very little in the way of Analysis Paralysis. That’s because the turn order is so unpredictable. You look at what you have on the board and then issue face down commands. Will you move, shoot, short halt, or go into over-watch? You don’t have to pick how those play out, just what they will do. Then you roll for initiative and then proceed. All 1st player tanks assigned a shoot command proceed to do so, then second player tanks (that still survive). Second player tanks then move if they were commanded to do so, and finally first player tanks move. At any point tanks in over-watch can be revealed to do opportunity fire one time.

That might seem simplistic but it means you can’t really sit there for an hour and plan everything out. Because the reality is that you’ll probably be looking at a very different battle field sooner rather than later. MBT was extremely fast paced for this reason. I really enjoyed that. It meant that a game which started with a lot pieces on the board moved much quicker than I was expecting from a play time stand point. More importantly though the game feels white-knuckle. I really liked it. The action never lets up and the gambles you’ll take exposing tanks to take objectives really make you sweat. This is one game that models the chaos and unpredictability of war in that way. You give your commands and hope to high heaven that you win initiative and can execute them whilst you’re still alive.

It’s something of a two edged sword though. The initiative rolls are modified by troops qualities and training, but it’s still a percentile die roll from each play, highest wins. I never thought I’d say this about a game with SO much in the box (seriously, a two inch box? A three inch box barely houses the punched base game let alone the upcoming expansions) but I wish there was a little more to the initiative than just troop quality. I cannot stress to you how important the initiative is, and for it to be just a roll off with no control means that the game can be very lopsided. It’s fairly simple to house rule, but I’d like to see an option where you could gamble by placing no-command tokens down on tanks and reveal them to give yourself DRMs on the initiative rolls, as you put all your efforts into focusing on a few key moves, for example.

This game isn’t particularly casual. I think if you go into MBT just looking for the base game you’re actually doing it a disservice. The advanced rules and everything they entail require a lot of reading and learning. It’s not a small rule book. But if you’re willing to put the time in then you have an unbelievably detailed exploration of what was contemporary armoured warfare. There’s rules for every kind of technology available at the time, and the game comes with an amazing amount of scenarios. I’ve played a few tactical games that come with like 6 scenarios, which is a shame if a game is good I want more of it! MBT’s playbook is the same size as the advanced rules, so good luck getting bored with this game.

Just know that this is a game that I would not recommend for newer wargamers. That’s just my opinion but the learning curve can be steep with those advanced rules and playing without them somehow feels like I’m missing out on the grandeur of what the game was designed to be. With expansions coming later in this year for the British Army on the Rhine and the FRG Bundeswehr this game is only going to get bigger, more comprehensive and also more complex. The new expansions add leaders amongst other things which have abilities that transcend previous rules.

There’s a lot to love here, but it might not be everyone’s cup of tea. Do yourself a favour and get this one played though because the white-knuckle-ride experience can be a total blast.

3 thoughts on “Review: MBT 2nd Edition from GMT Games – “We are Oscar Mike””